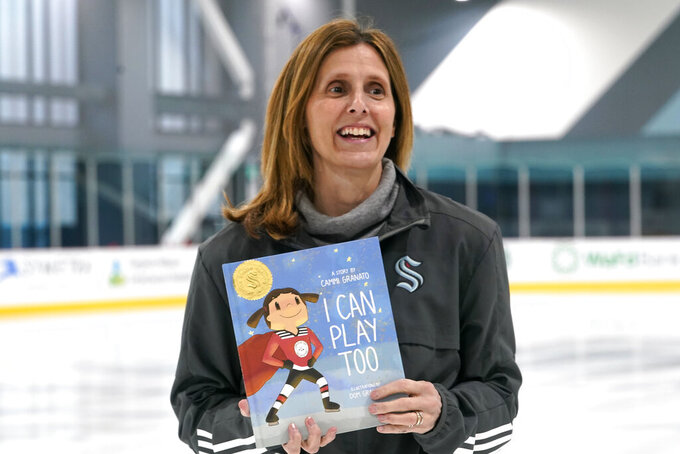 Seattle Kraken NHL hockey team pro scout Cammi Granato poses with her new book, "I Can Play Too," Wednesday, Feb. 2, 2022, in Seattle. For years, Hockey Hall of Famer Granato was asked to write a book about her experience in becoming one of the finest women's hockey players of all time. She finally has, but on her own terms and with a specific audience in mind—kids. And while her book is based around hockey and her personal experiences, Granato is hoping the message can resonate beyond the ice. (AP Photo/Elaine Thompson)

As a pro scout for the Seattle Kraken since 2019 — the first female scout in NHL history — she spent ample time in the press box at Vancouver’s Rogers Arena, checking out talent for the league’s newest team.

“I’m very, very excited to take on this role,” Granato said on a video call.

As assistant GM, Granato will oversee Vancouver’s player development department and its amateur and pro scouting department. It’s a job she feels prepared for after three years of scouting for the Kraken.

“One of the things that I had said coming in here is I haven’t done this job before, but I have great people surrounding me. I have a lot of experience in the game and definitely the experience with Seattle has helped me prepare,” said Granato, who recently published a children’s book.

Granato, 50, joins a Canucks front office that has been entirely revamped since former general manager Jim Benning, head coach Travis Green and several other staff were fired in early December.

She has ample playing experience, too, having captained the U.S. team that beat Canada for the gold medal at the 1998 Nagano Olympics. The native of Downers Grove, Illinois, also won silver at the Salt Lake City Games in 2002.

She remains the all-time leading scorer for the American women’s team with 343 points (186 goals and 157 assists), and in 2010 reached the sport's pinnacle as a player — she and Canadian Angela James were the first women to be inducted into the Hockey Hall of Fame.

“Cammi is a tremendous leader and has earned the respect of the hockey world," Canucks president of hockey operations Jim Rutherford said in a statement. "She has a great mind for the game and experience and influence at all levels,”

“For sure, it’s a big day to have two women in management on one team," Granato said of her and Castonguay's roles. "It just goes to show Jim’s vision to sort of diversify, get different voices, get different people’s experience and draw them together.

Granato believes she and Castonguay won’t be anomalies for long. She expects more women to join teams around the league, and soon.

“You can now look at the position of someone who’s qualified and not just think it’s a man’s role,” she said. “There’s women that are qualified, there’s players that will come out of these Olympics that will retire and be able to be in roles in the NHL. I do think that you’ll see more of it. I think it’s an exciting time.”

“We wish Cammi the best and thank her for her work in helping launch the Kraken,” Francis said. “We understand this is the right opportunity for her and her family.”