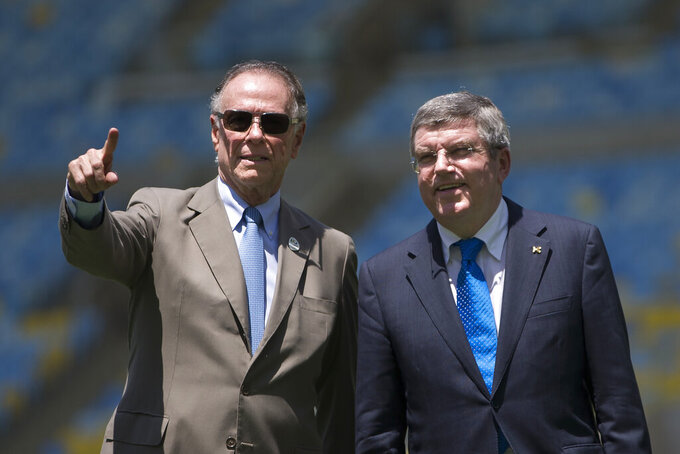 SAO PAULO (AP) — Carlos Arthur Nuzman, the head of the Brazilian Olympic Committee for more than two decades, was sentenced to 30 years and 11 months in jail for buying votes for Rio de Janeiro to host the 2016 Olympics.

The 79-year-old executive, who was an IOC member for 12 years including at the time his colleagues were allegedly bribed in the 2009 vote, won't be jailed until all his appeals are heard.

He and his lawyer did not comment on the decision.

Cabral, who has been in jail since 2016 and faces other convictions and investigations, told Bretas two years ago he paid about $2 million in exchange for up to six votes in the International Olympic Committee meeting that awarded Rio the Olympic and Paralympic Games. He said the money came from a debt owed to him by Soares.

Cabral, who governed Rio state from 2003-10, added that another $500,000 was paid later to Diack’s son with the aim of securing three more votes of IOC members. Lamine Diack was a senior IOC member at the time

Bretas' ruling labels Nuzman as "one of the main responsibles for the promotion and the organization of the criminal scheme, given his position in the Brazilian Olympic Committee and before international authorities." The judge also said the sports executive "headed and coordinated action of the other agents, clearly as a leader” to illegally garnish support at the IOC.

The judge said he will send the results of the investigation to authorities in Senegal, where Papa Massata Diack and Lamine Diack live, and France. A French court in 2020 sentenced Lamine Diack to two years in jail for corruption while leading track and field. Now 88, Diack returned to Senegal in May.

Rio's bid beat Chicago, Tokyo and Madrid to host the 2016 Games in a vote held in Copenhagen..

Barack Obama traveled as the sitting president of the United States to Denmark to campaign for his home city Chicago. Many years later while still in office, he hinted at possible corruption in sports when he described the 2016 Olympic vote as “a little bit cooked.”

The investigation in Brazil began in 2017 after French newspaper Le Monde found members of the IOC had been bribed three days before the vote.

In 2017, the IOC suspended Nuzman's honorary membership which he has held since 2013 and has yet to be removed.

“Now, the IOC ethics commission will study the judgement against Mr. Nuzman and will make its recommendations as soon as it receives the full information from the Brazilian authorities,” the IOC said on Friday in a statement.