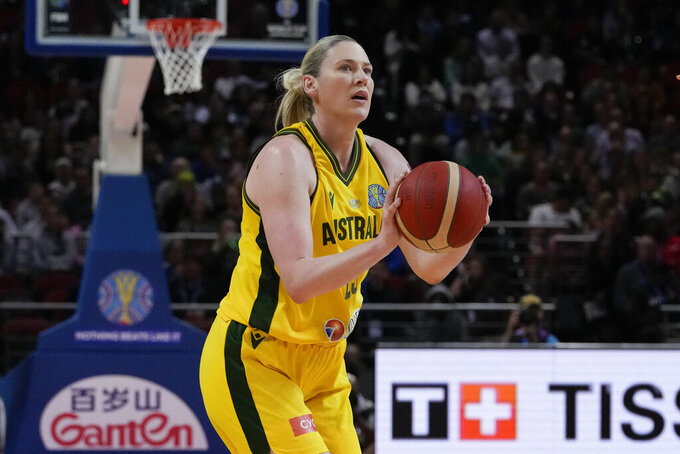 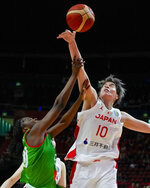 SYDNEY (AP) — Lauren Jackson was emotional after playing her first game for Australia in 12 years.

The Hall of Famer didn't get the result she wanted as the Opals lost to France 70-57 on Thursday to cap off the opening day of the women's World Cup.

“It was disappointing, but we knew France would be tough,” the 41-year-old Jackson said. “I was happy to be here. The last time I played in this arena was the 2000 Olympics. It was incredibly special, the crowd was awesome.”

Jackson last played on the Australian national team in 2010 and retired from basketball six years later because of a chronic knee injury.

Nearly 11 months after starting her return, Jackson checked in for the first time midway through the first quarter and got a huge ovation from the crowd. She missed her first shot, but then made a 3-pointer from the top of the key — her only points of the game. That was the 600th point in World Cup play during her Hall of Fame career. She’s only the third player ever to reach that mark.

The return of Jackson wasn't enough to lift Australia to the win. Gabby Williams had 14 of her 23 points in the first half when France led 32-31. They extended the lead to five after three quarters and wouldn't let the Opals get much closer. Kristy Wallace's 3-pointer with 4:13 left made it 61-55, but that was Australia's last basket of the game.

Arella Guirantes had 26 points, nine rebounds and eight assists to lead Puerto Rico to its first-ever victory in the World Cup.

Puerto Rico played in its first World Cup in 2018 and was winless in three games in that tournament. The country was also winless at last year's Tokyo Olympics.

The win comes at a difficult time for Puerto Rico as the island tries to recover from the destruction caused by Hurricane Fiona earlier this week.

Puerto Rico raced out to a 31-16 lead after the first quarter and never looked back. The 31 points were the most the national team had scored in a period in its brief World Cup history.

Breanna Stewart scored 22 points and Alyssa Thomas had 14 points, nine assists and seven rebounds in her debut for the United States.

The Americans jumped out to a quick 12-0 lead before Belgium settled down to get within one. The U.S. lengthened the lead again behind Stewart and Jewell Loyd and was up 48-39 at the half. The Americans went on a 12-4 run to start the third quarter and put the game away.

Trailing by one after the first quarter, the Canadians outscored Serbia 23-12 in the second quarter to take the lead and didn't look back.

Kia Nurse, who missed the entire WNBA season while recovering from a torn ACL she suffered in October 2021, had nine points in 19 minutes.

Japan only led 21-18 after one quarter before taking control in the second period with a 26-11 advantage. Japan continued to extend its lead in the third quarter and coasted the rest of the way.

Djeneba N'Diaye scored 13 points and Sika Kone added 10 for Mali, which is still looking to win its first World Cup contest since 2010.

The Chinese jumped out to a 16-2 lead behind hot shooting and solid defense. By the time the first half ended it was 54-20.

Jihyun Park was the only player in double figures for South Korea, scoring 14 points.