Gator Chomp: Ledecky heads to Florida to work with Nesty 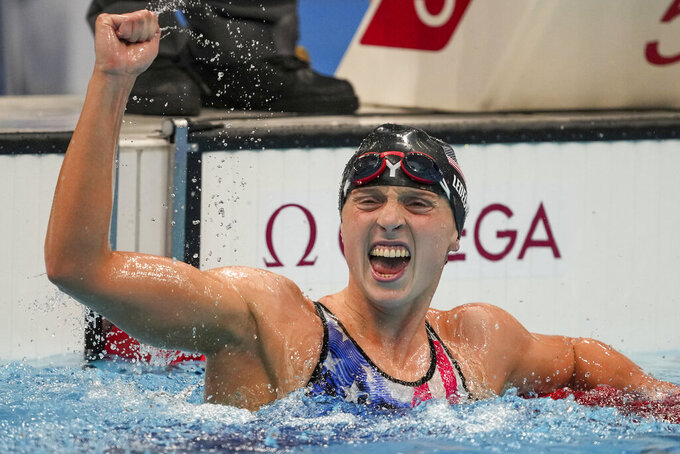 FILE - Katie Ledecky reacts after winning the women's 1500-meters freestyle final at the 2020 Summer Olympics in Tokyo, in this Wednesday, July 28, 2021, file photo. Ledecky announced Wednesday, Sept. 22, 2021, that she is moving to the University of Florida to be closer to home and train under Anthony Nesty, a rising star coach who will oversee her preparations for the 2024 Paris Olympics. Ledecky, a seven-time Olympic gold medalist, spent the last five years at Stanford University, where she worked with U.S. national team coach Greg Meehan while earning a psychology degree. (AP Photo/Matthias Schrader, File)

Katie Ledecky will be learning a new stroke.

Ledecky announced Wednesday that she is moving to the University of Florida to be closer to home and train under Anthony Nesty, a rising star coach who will oversee her preparations for the 2024 Paris Olympics.

“Stanford has been my second home,” Ledecky wrote on her Twitter account. “It will always have a special place in my heart. Having completed my college degree this year, I am moving east to be closer to home and family.”

The Washington, D.C., native will now be training with Nesty, a 1988 Olympic gold medalist who serves as the primary coach to both Bobby Finke, who swept the 800- and 1500-meter freestyles at the Tokyo Games, and Kieran Smith, who took bronze in the 400 free.

Ledecky will also serve as a volunteer assistant coach on the Gators staff, a coup for Nesty when he hits the recruiting trail.

Ledecky won two golds and two silvers at 2020 Tokyo Games this past summer. Over the last three Olympics, she became the first female swimmer to capture six individual golds and the first U.S. woman to win that many in any sport.

Though not as dominant as she was in the 2016 Rio Games — Ledecky actually finished fifth in one event at Tokyo, the first time she's failed to medal in an Olympic race — she remains one of the world's greatest swimmers and hopes to add to her medal haul in Paris.

Ledecky gives Nesty another top distance swimmer — probably the best female ever — with the next Olympics less than three years away.

“The knowledge and experience that Katie brings to the pool are unparalleled,” Nesty said. “In addition to her obvious excellence as a swimmer, Katie is an exceptional person who will make a great impact on the student-athletes here. Katie’s values are in total alignment with the Florida program."