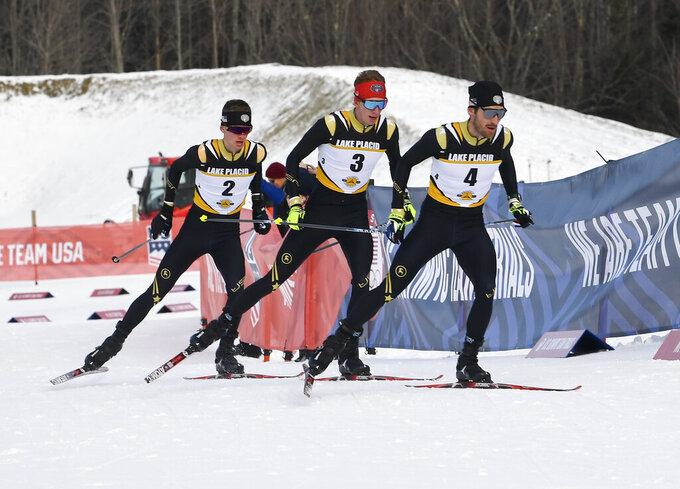 FILE - Jasper Good (2), Jared Schumate (3) and Taylor Fletcher (4) compete during the cross-country stage of the Nordic combined 10 kilometers at the U.S. Olympic team trials at the Mount Van Hoevenberg Olympic Sports Complex on Friday, Dec. 24, 2021, in Lake Placid, N.Y. Nordic combined, which uniquely tests skiers on jaw-dropping jumps and heart-pounding trails, has been a part of the Winter Olympics since 1924. It is also the only Olympic sport without women. (AP Photo/Hans Pennink, File)

GENEVA (AP) — Nordic Combined will remain the only Olympic event without women at the 2026 Winter Games.

The International Olympic Committee decided on Friday not to add a women’s event on the skiing program at the Milan-Cortina d'Ampezzo Games in four years' time.

The long-term Olympic future of Nordic Combined was also put in doubt with no commitment to keep the men's event in 2030 unless the IOC sees a bigger global audience and more countries sending athletes to compete.

“It’s a travesty,” Billy Demong, a five-time Olympian in Nordic Combined and member of USA Nordic’s board of directors, told The Associated Press. “This is one of the biggest moves against gender equity in the Olympic movement in history.”

On a day of tough action by the IOC executive board, boxing's troubled governing body IBA was also removed from involvement at a second straight Summer Games.

The IOC cited long-standing concerns with the integrity of leadership and the judging and refereeing of bouts for leaving the Lausanne-based IBA out of organizing the 2024 Paris Olympics tournaments and all qualifying events. The IOC also took control of boxing at the Tokyo Olympics last year.

Boxing, which has a year to show the IOC it should be at the 2028 Los Angeles Games, and Nordic Combined both have long Olympic histories that are at risk.

Nordic Combined tests athletes in the contrasting disciplines of ski jumping and cross-country skiing, and was one of the original 16 medal events at the first Winter Games in 1924.

However, the women's event had its first world championship only last year. Just 10 nations took part and one nation — Norway — swept the three medals.

IOC sports director Kit McConnell pointed to too-small audiences for the event overall and a lack of “diversity of countries” taking part.

“It’s fair to say that it’s struggled to grow on both counts," McConnell said at a news conference.

That assessment was disputed by Demong.

Some athletes feared the IOC might solve the equality issue by even dropping the men’s event in four years.

There was a long discussion about dropping the men, McConnell acknowledged, but it was judged unfair so close to the games for athletes who expected to compete and had spent years preparing.

The decision was made by the IOC executive board, which has twice as many men as women in a 10-5 split.

Annika Malacinski is one of dozens of women who have sacrificed time and money pursuing a goal of Olympic gold in Nordic Combined, who might now have to shift their focus to ski jumping or cross-country skiing to extend their career.

“How could they? How dare they?” asked Malacinski, who has American-Finnish dual citizenship and competes for the U.S. “The time and effort I have put into building this sport with so many amazing girls around the world, and for the IOC to tell us that we are not enough? Disgusting.

“And for the Olympics to brag about how equality has never been at its highest days before this decision? Shameful,” Malacinski added. “We’re hearing your message loud and clear, and know that you’re on the wrong side of history today. The fight has just begun.”

Despite denying the hopes of women athletes, a headline “Milano Cortina 2026 set to become the most gender-balanced Olympic Winter Games in history” was put on an IOC release sent during the online news conference.