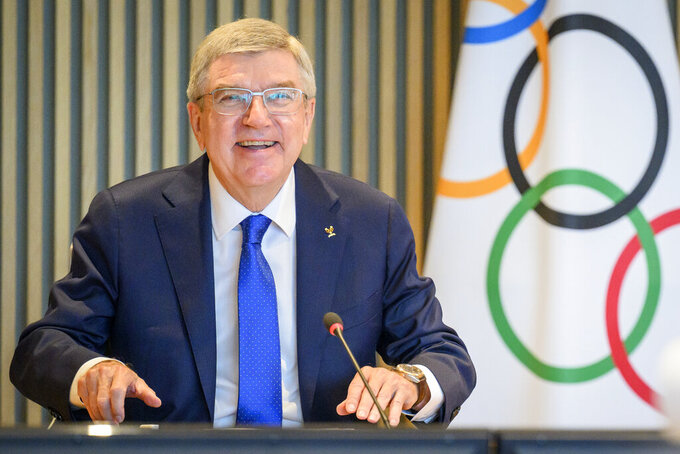 GENEVA (AP) — The IOC approved its human rights strategy on Friday, completing a years-long process months after the Beijing Olympics brought scrutiny on how sports engage with a host nation’s record on discrimination and civil liberties.

The 50-page Olympic document guided by United Nations principles was also published one week after the outgoing U.N. human rights chief Michelle Bachelet released a report that said China’s detention of Uyghurs and other ethnic groups may be a crime against humanity.

“The framework will fundamentally shape the working practices of the IOC, the Olympic Games and the Olympic movement, ensuring that human rights are respected within their respective remits,” the Olympic body said on Friday after a board meeting.

Those remits have typically limited the IOC’s ability or willingness to tackle host nations beyond specific sports issues like organizing events and preparing venues.

Ahead of the Beijing Olympics — amid scrutiny of China’s treatment of its Uyghur people, suppression of democratic rights in Hong Kong, and the c ase of tennis player Peng Shuai — IOC president Thomas Bach insisted it was a sports body and not a “world government.”

Asked on Friday about Bachelet’s report, Bach said the IOC worked with sports officials in China to “ensure all obligations within the host city contract were met.”

Bach also declined to speculate when asked what impact the rights strategy could have on picking hosts for an Olympics in 2034 or later. Sports officials in Saudi Arabia have said Olympic hosting is an “ultimate goal” for the kingdom.

“About which countries are we talking? What will be the conditions in these countries by then?” Bach replied. “This is mere speculation therefore we cannot enter into this.”

The IOC has a calmer decade ahead with Olympic hosts chosen in France, Italy, the United States and Australia after the relatively turbulent run-in to the Beijing Winter Games.

Beyond host nation politics, the IOC’s commitment to human rights also focuses on ensuring safe and inclusive sport, including for transgender athletes, and improving representation for athletes.