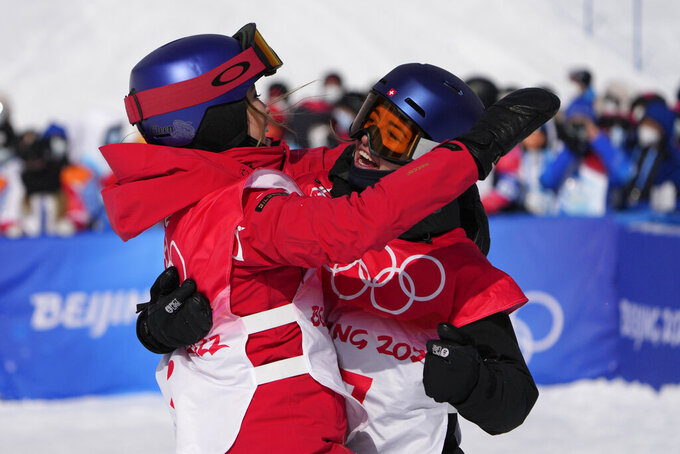 ZHANGJIAKOU, China (AP) — Mathilde Gremaud has long known that every point counts in her sport.

At the Beijing Olympics, every fraction of a point counts, too.

The Swiss freestyle skier who squeaked into Tuesday's slopestyle final by a mere .36 points edged out China's Eileen Gu for the gold medal by an even narrower margin — .33 points.

From almost out to the top of the podium.

“This was a new day. I woke up with good energy, positivity,” Gremaud said. “I was excited to ski.”

That excitement almost got lost with another close call — a broken binding on her first run down the hill in the final.

She overcame that to win another medal. This pairs with the bronze she picked up in the big air event won by Gu. Gremaud also has a slopestyle silver from the 2018 Pyeongchang Games for a complete set.

“Did not expect that,” said Gremaud, who turned 22 last week. “It’s a great feeling. I'm excited to put them all together and just enjoy.”

Such a roller coaster of emotions for Gremaud, who couldn't get anything going in qualifying Monday and barely squeaked in as the 12th and final competitor.

She earned the final spot over Megan Oldham of Canada. Too close of call for a competitor who was in top form and one of the favorites after taking silver at the Winter X Games just last month.

“I was at the bottom of a hole,” Gremaud said of her emotional state. “I was really down. I really felt terrible. But what do you do when you’re at the bottom of the trough? You can only go up.”

She thinks the binding break might have been just what she needed.

“It put my mind somewhere else instead of thinking, ‘What am I going to do, I just crashed on my first run,’” she recounted. “I was thinking about my binding and wondering, ‘Why did you break?’”

She refocused and put down her best run of the competition, complete with a left double cork 1080 on the first jump of her second run. It's the trick she believes made the difference between first and second.

But it was a long, long wait until she found out. She was the first to go in the second round, posting the score to beat. She couldn't better it with her third run and had to wait even more.

“It was still good because I could see everyone else go down," Gremaud said. "I was just excited for every girl to have their best run. I wanted to stay where I was — at the top spot — but I was rooting for everyone. I was just hoping everyone would be able to do what they wanted to do.”

Gremaud held her breath for Gu, who was on point in her final run to vault from back in the pack to a silver medal. It was just a fraction of a point away from gold.

“I trust the judges, sometimes they give it to you, sometimes they don’t,” said Gu, the 18-year-old American-born freestyler who is competing for her mother’s home country of China. "And today, they didn’t. ... I did everything that I could that was in my control, and some things you just can’t control and you just have to accept it.”

Only after bronze medalist Kelly Sildaru of Estonia went as the last skier on course could Gremaud exhale. A crazy 24 hours, for sure.

“I cried for about half an hour and after that was able to focus on today,” Gremaud said. “A 12th rank in qualification — but everyone starts from zero again. I still had hope.”