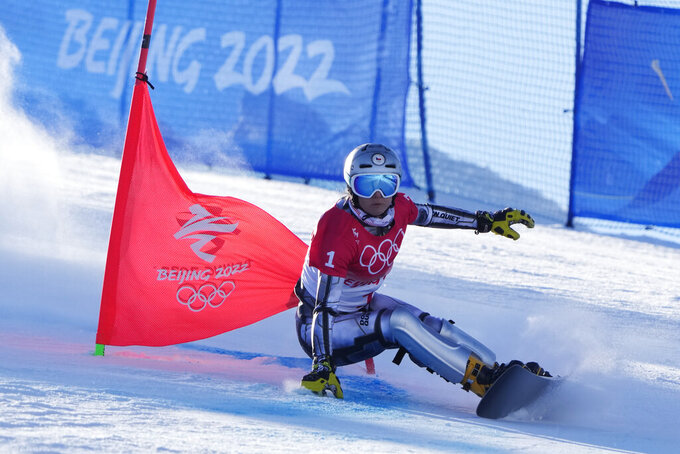 ZHANGJIAKOU, China (AP) — In the four years since Ester Ledecka made Olympic history with gold medals in both skiing and snowboarding, she conceded she’s thought about slowing down a little.

Maybe even — dare she say — neglect her snowboard a bit to focus more on the skiing side.

Good thing she kept on shredding.

The standout from the Czech Republic defended her snowboard parallel giant slalom title with a quick final run on a sun-splashed course Tuesday. Next up, a trip to the Alpine venue where she'll try for a repeat run at history when she attempts to defend her super-G crown on Friday.

“If I had decided to only do skiing, then I would’ve spent four years on the skiing," Ledecka said. “And I’d be here watching this race and I would feel sad that I couldn’t compete.”

Four years ago in South Korea, Ledecka became the first competitor to win gold in two different sports at the same Winter Games. She has a chance to accomplish the feat again in China.

In addition to super-G, Ledecka plans on racing the downhill (Feb. 15) and combined (Feb. 17). It's an ambitious task.

“I hope I’ll switch myself very fast and I’ll enjoy it on the ski side too,” she said.

Unlike Alpine skiers, snowboarders race side by side on the giant slalom course in an NCAA Tournament-like format. It starts with 16 riders and narrows down to two who go for gold.

In the gold-medal race, Ledecka, who earned the top seed based on time trials earlier in the day, opened an early lead on Daniela Ulbing of Austria. In her haste to make up ground, Ulbing veered off course, and Ledecka coasted in for the win.

Gloria Kotnik of Slovenia took a surprise bronze (in 137 World Cup starts, she's never been on the podium). Count Kotnik, who doesn't ski, as impressed with Ledecka's exploits in both realms.

“She’s one amazing lady and she’s such a big inspiration for all athletes,” said Kotnik, who welcomed a son in January 2021. “Being the best in two different sports is just amazing.”

This shows just how dialed in Ledecka is these day: She didn't even know she'd won.

Lost in the hubbub of so many races, and moving down, then back up the hill so many times, she thought she still had another race. At one time, PGS was a two-heat affair, but it was only one for these Olympics. Ledecka had to ask Ulbing if that really was indeed the end of the race.

On the men’s side, second-seeded Benjamin Karl of Austria held off Tim Mastnak of Slovenia for the gold. Russian rider Vic Wild picked up the bronze as the No. 9 seed in the bracketed field. Wild, who is from the United States and was granted Russian citizenship in 2012, won gold in the event at the 2014 Sochi Games.

Karl added a gold to his now-complete Olympic medal collection. He already had a silver from the 2010 Vancouver Games and earned bronze in 2014 in the discontinued parallel slalom.

“When I was a child ... I wrote on a sheet of paper that one day I would be world champion,” Karl said. “I will be the fastest racer in the world and I’ll be an Olympic champion."

Mission just getting started for Ledecka.

The 26-year-old was a surprise winner in the super-G at the Pyeongchang Games. Wearing bib No. 26 that day, she made a late charge when many thought the race was over to wind up on top of the podium.

She had a week to recover before winning the PGS title.

This time, there's only three days until she climbs into the start gate.

“I'm very happy I'm able to (compete in both), that it's not the same day, or tomorrow,” Ledecka said. “We’ll work on it. I already had my ski coach ... doing some research on the slope. I have some videos, which I will watch on the way to the snowboard ceremony and I will try to switch myself for skier again. We'll see how it goes.”

One question not to ask Ledecka: which she prefers, snowboarding or skiing. Because, in her heart, she’s equal parts of each and won't pick one over the other.

“I’m very grateful that I’m able to make it on this kind of a level ... Olympics in both sports,” she said. "That's amazing in itself and this gold medal today, it’s only a bonus.

“For me, it’s natural (to do both). I’ve been doing this since I was a child and just having fun.”