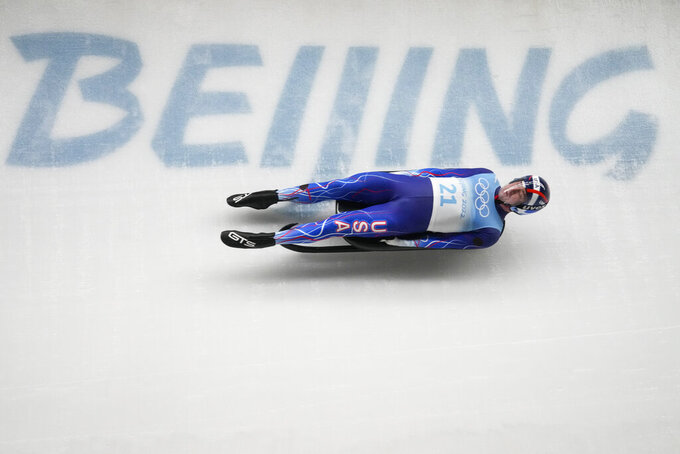 Tucker West, of the United States, slides during the luge men's single final run at the 2022 Winter Olympics, Sunday, Feb. 6, 2022, in the Yanqing district of Beijing.(AP Photo/Dmitri Lovetsky) 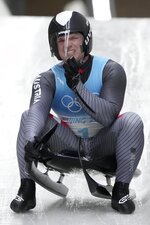 BEIJING (AP) — Johannes Ludwig let all his rivals know back in November that he would be the one to beat at the Beijing Olympics.

Ludwig is the Olympic men’s champion for the first time, making him the oldest — he’s eight days shy of turning 36 — to win that race’s gold medal. Ludwig finished four runs at the Yanqing Sliding Center in 3 minutes, 48.735 seconds, 0.160 seconds ahead of Wolfgang Kindl of Austria and 0.951 seconds ahead of bronze medalist Dominik Fischnaller of Italy.

“I had a lot of not-so-successful years," Ludwig said. “In 2014, I didn't qualify for the Olympics. I had a lot of fourth places at world championships; I think maybe five. The fun of this sport is to always continue pushing, and I think this medal is a sign that I did the right thing."

It’s no surprise that a German won, and shouldn’t be a surprise that this was Ludwig’s turn. There have been 16 Olympic men’s luge races; a German man has won 11 of them. Ludwig was the bronze medalist at the Pyeongchang Games four years ago, then made it clear that he would be the one to catch at the Beijing Games when he arrived in China for the season-opening World Cup race and simply routed the field.

“I know this moment and Johannes, he's worked a long time for this medal," said Felix Loch, a two-time Olympic champion from Germany who was fourth and embraced Ludwig warmly when the race was over. “And now he's got the medal. It's great for him and we will celebrate with him."

Ludwig was nearly a second better than anyone else in that World Cup this past fall, which is just two heats, not the Olympic four. His winning margin at that World Cup was the biggest luge had seen in nearly eight years, a simply dominant showing.

Kindl closed the gap between Ludwig and the rest of the world at the Beijing Games.

Just not by enough.

And with that, the dream season for Ludwig is complete — World Cup overall champion, and now, the Olympic crown. He already knew what Olympic gold felt like after being part of the team that won the relay for Germany in Pyeongchang.

This time, though, the top of the podium was his and his alone.

Kindl grabbed an Austrian flag when his race was done, perfectly content with Olympic silver. Fischnaller couldn't contain his celebration when he clinched his medal, hugging longtime partner Emily Sweeney of the United States — she competes in the women's race that starts Monday — and screaming into the frosty air.

“I hope it's a very good omen and maybe she has something around her neck in two days," Fischnaller said.

Ludwig was the bronze medalist at the Pyeongchang Games, denying Fischnaller a medal there by 0.002 seconds — nowhere near enough time to even blink. Fischnaller carried that disappointment for four years.

“Finally, I have it now and I'm very excited, happy, relieved," Fischnaller said.

Defending Olympic gold medalist David Gleirscher of Austria had trouble in both runs Sunday and finished only 15th.

The field was cut from 34 sliders to 20 for the fourth and final run, and all three American men advanced to the fourth heat. Chris Mazdzer, the silver medalist from the Pyeongchang Games, was eighth. Tucker West finished 13th — his best finish in three Olympic appearances. And Jonny Gustafson was 19th in his Olympic debut.

“I'll definitely take eighth," said Mazdzer, who will compete in the team relay later this week for what will almost certainly be his final Olympic event. “My best finish this year. It feels good. It does."

By the time the fourth and final run came around, it was clearly a two-man race. Barring disaster, either Ludwig or Kindl would be the winner; Ludwig’s margin over Kindl was 0.112 seconds after three runs, 0.722 seconds — that’s a big margin in luge — over the third-place Fischnaller.

Ludwig, the last sled on the track, was flawless.

He would not let gold slip away, grabbing at his helmet in disbelief before jumping into a mob of happy German athletes and coaches to begin the celebration.

Among other notables, Fan Duoyao — China’s first men’s luge Olympian — was 24th. Mateusz Sochowicz of Poland, the slider who broke his left kneecap and cut his right leg to the bone in a training accident at the Yanqing track in November, was 25th.

And Saba Kumaritashvili, the cousin of Nodar Kumartashvili — the slider from the former Soviet republic of Georgia who died in a training accident hours before the 2010 Vancouver Games officially opened — was 31st. He crossed the finish line, smiled broadly and pumped his fists in celebration.

He left feeling like a winner. So did many others. Ludwig just topped them all.