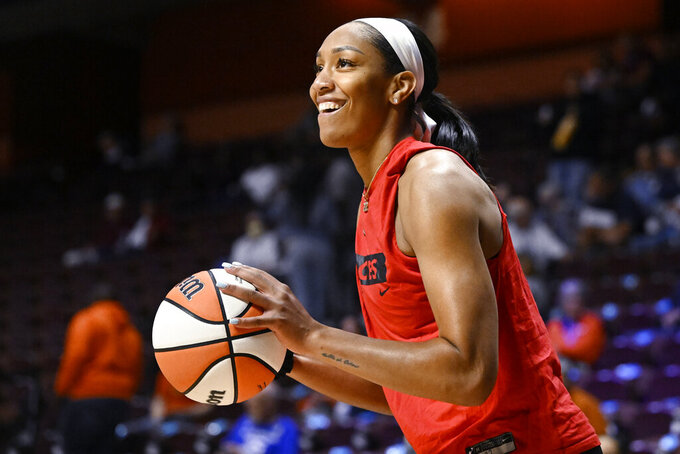 SYDNEY (AP) — The U.S. women's basketball roster has undergone major changes since the Americans won gold at the Tokyo Olympics last year with Sue Bird retired and Brittney Griner in a Russian jail.

Even without Bird and Griner — and no Diana Taurasi — the U.S. is the favorite to win a fourth consecutive FIBA World Cup championship that begins Thursday. The Americans last lost a major international game in the semifinals of the 2006 World Championship, falling to Russia. The U.S. hasn't lost an Olympic game or World Cup contest since.

The Americans have won 10 of the 19 World Cups but will definitely miss Griner, who was arrested, then wrongfully detained and later convicted of drug possession charges amid Russia’s invasion of Ukraine.

Griner was sentenced last month to nine years in prison. She averaged 16.5 points a game in Tokyo, tying her with A'ja Wilson for the team-high.

“It will look different without the dominant force of Brittney,” U.S. coach Cheryl Reeve said of the American's style of play. “We want to put it inside as that's the strength of USA Basketball. We will continue to have the ball inside.”

The Americans still have Wilson, who earned her second WNBA MVP award earlier this month and led the Las Vegas Aces to their first WNBA championship. Breanna Stewart should also make her presence felt, giving the U.S. a 1-2 punch in the forward position that no country can match.

The duo will counted on to fill a leadership void left by the retirement of Bird and the absence of Taurasi, who is sidelined with a quad injury. There are seven first-time World Cup players on the U.S. team.

“You can’t force" leadership, Reeve said. “You have conversations and players like Chelsea Gray recognized it. Chelsea’s really ready for that. I’d say the same thing for Stewie. She’s very aware. ... That’s one of the first conversations we had. Not just with your play, but we also need your voice.”

Some other things to look for in the tournament:

Lauren Jackson came out of retirement to help Australia attempt to win its first gold medal since the 2006 tournament. The 41-year-old isn’t the same player who averaged 18.9 points during her WNBA career for Seattle, but the 6-foot-5 forward has shown she has the ability to still compete with the world's best.

Jackson retired in 2016 after knee injuries derailed her career. She had hoped to compete in the Olympics that year, but an ACL injury ended that dream. She stopped playing in the WNBA in 2012, walking away as one of the best players in league history.

Belgium's Emma Meesseman averaged 26.8 points in the Tokyo Olympics and had a strong WNBA season with the Chicago Sky this past year. She's hoping to get Belgium back to the medal round for the second consecutive World Cup. The team lost to host Spain in the bronze medal game in 2016.

Jonquel Jones is making her debut with Bosnia and Herzegovina. The 2021 WNBA MVP helped Connecticut reach the WNBA Finals before they lost to Las Vegas.

Marine Johannes of France, who had a stellar season playing for the New York Liberty, will miss the World Cup because of a thigh injury. The French team is already missing injured veteran center Sandrine Gruda. France lost in the quarterfinals of the 2018 World Cup to Belgium.

LOOKING FOR A WIN

South Korea has now played in 16 consecutive World Cups, tied for the U.S. for most ever. But South Korea hasn't won a game since 2010 when it beat Japan by one point.

The South Koreans are 0-9 since that victory and will be missing WNBA player JiSu Park for the tournament. They aren't alone in looking to get at least one win in the tournament. Puerto Rico was winless in its three games in 2018 and also didn't have a victory in the Olympics last year. Mali — a late replacement for Nigeria — is playing in its second World Cup, going 1-4 in 2010.