Olympic Alpine skiing remaining all in the family in Beijing 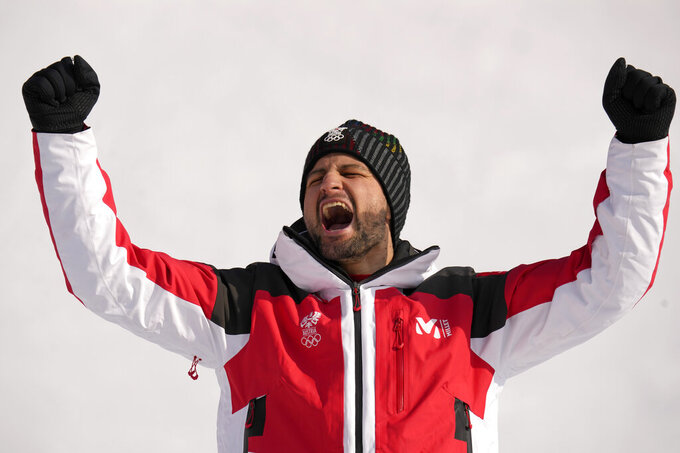 Johannes Strolz, of Austria, gold, celebrates during the medal ceremony for the the men's combined at the 2022 Winter Olympics, Thursday, Feb. 10, 2022, in the Yanqing district of Beijing. (AP Photo/Luca Bruno)

BEIJING (AP) — Austrian skier Johannes Strolz was preparing to sit on a stage in a room filled with dozens of journalists to describe his improbable run to the Alpine combined title at the Beijing Olympics when his phone rang. It was his dad.

So with the spotlights trained on him, Strolz backed away for several minutes to take the call, which was understandable with so much to share: They are the first father-son duo to win gold in the same Olympic ski racing event.

“He’s just overwhelmed (by) what happened today and he is happy for me and proud of me,” Strolz said. “It’s just an unbelievable moment for all of us and my family.”

Strolz’s father, Hubert, won gold in combined and silver in giant slalom at the 1988 Calgary Games, then almost won another Olympic combined four years later in Albertville but missed a gate near the end of the race. Johannes was born later that year — 1992 — and Hubert used the coming birth of his son to help him get over that missed chance.

Now, though, the family has another gold to celebrate.

Strolz, who has won only one World Cup slalom, was fourth fastest after the downhill run on Thursday. But he was half a second quicker than anyone else in the slalom, helping him edge first-run leader Aleksander Aamodt Kilde of Norway by 0.58 seconds.

Skiing is known as a sport handed down from generation to generation and the Beijing Olympics are quickly turning into a family affair.

In Tuesday’s super-G, American racer Ryan Cochran-Siegle took silver 50 years after his mom, Barbara Ann Cochran, won the slalom at the 1972 Sapporo Games. The super-G was won by Matthias Mayer, an Austrian whose father, Helmut, also won a medal in the same event — silver — in Calgary.

“She always told me no one remembers fourth place, and it feels really good to not be in that situation,” said Crawford, who finished fourth in Monday’s downhill and was also fourth in the combined at last year’s world championships. “It’s kind of cutthroat, but it’s true at the Olympic Games — a medal is everything.”

Strolz had a career-best finish of 10th in more than eight years of World Cup racing and was dropped from the powerhouse Austrian team at the end of last season. Then he won a slalom last month in Adelboden, Switzerland, and a spot on the squad for the Beijing Games, where he is continuing to prepare his own slalom skis — as he has done all season.

Strolz spent “3-4 hours” by himself in the wax room on Tuesday. His downhill skis were prepared by a professional ski technician.

“My skis were perfect, especially the downhill skis — they were absolute rockets,” Strolz said. “I got the skis from Matthias Mayer and obviously he has very fast skis.”

Back when Strolz was struggling to make the team, he worked as a traffic cop in his hometown, and helped out on the family farm.

When he placed the medal around his own neck per pandemic-era standards, Strolz was shaking his head in apparent disbelief.

“It is truly an amazing story,” said Andreas Puelacher, the head coach of Austria’s men’s team. “The Austria team is a strong team and it’s not so easy to be on this team.”

For Kilde, it was his second consecutive medal after a bronze in super-G.

“I hadn’t skied slalom in two years,” the Norwegian speed specialist said, adding that he got some slalom tips from his girlfriend, Mikaela Shiffrin, whose 47 World Cup slalom wins are the most in a single event by a man or woman — even though the American failed to finish both of her events so far in Beijing.

“She just said to me, ‘Keep up the tempo and keep the skis under you.’ And that’s what I’m going to do,” Kilde said after the downhill run.

After the slalom, Kilde recounted how he "went for it, just pointed the skis and tried to stay in balance.”

Another pre-race favorite, Loic Meillard of Switzerland, had an error in the downhill but managed to stay on the course. He failed to finish the second run after straddling a gate.

Thursday’s race had only 27 total entrants, compared to more than 40 for both the downhill and super-G earlier in the week. It was the first time in Olympic history that no American entered the event and it may have also marked the final combined at the Olympics with the International Ski Federation pushing to include parallel races in the program.

“It’s another discipline, another chance for us to get medals in the Olympics,” Kilde said. “So it would be a pity if they remove it.”

Barnabas Szollos of Israel was a surprise sixth-place finisher with the second-fastest slalom leg.

The downhill run had to be delayed for about 10 minutes when Yannick Chabloz crashed and was taken away in a sled. The Swiss skier tumbled into a barrier and then slid down part of the mountain.