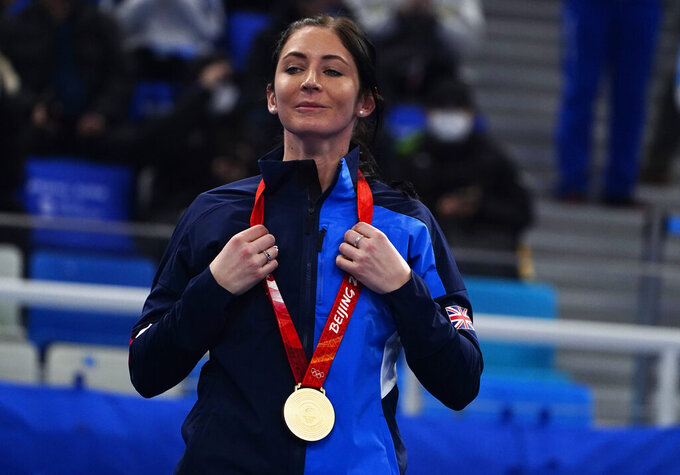 FILE - Britain's Eve Muirhead, from the gold medalist team, celebrates during a medal ceremony for the women's curling at the Beijing Winter Olympics, Feb. 20, 2022, in Beijing. Olympic curling champion Eve Muirhead is retiring from the sport it was announced Thursday, Aug. 11. The 32-year-old Muirhead secured Britain's only gold medal at this year's Winter Olympics in Beijing, having also won bronze in Sochi in 2014. (AP Photo/Brynn Anderson, file)

The 32-year-old Muirhead secured Britain's only gold medal at this year's Winter Olympics in Beijing, having also won bronze in Sochi in 2014.

“After 15 years of international curling and 21 international titles I have made the hardest decision of my life to hang up my curling shoes and retire,” Muirhead said in a post on social media on Thursday. “Throughout my career and like most athletes, I have experienced both the highest of the highs, (becoming an Olympic champion) and the lowest of lows and at times the future seemed very distant. It’s been an emotional journey, but a journey that I am incredibly proud of."

Muirhead also teamed up with Bobby Lammie to win the mixed doubles world championship in April.