Olympic powerbroker to go on trial in Geneva in forgery case 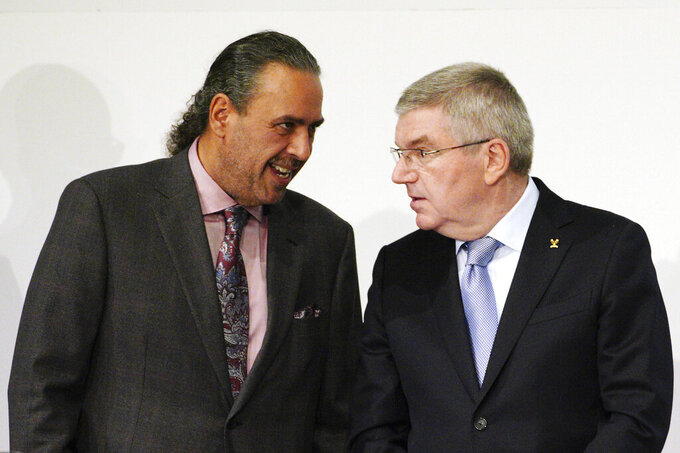 FILE - In this Wednesday, Nov. 28, 2018 file photo, Sheikh Ahmad al Fahad al Sabah, left, president of the Association of National Olympic Committees (ANOC), and IOC President Thomas Bach talk prior to the opening of the ANOC general assembly in Tokyo. Olympic powerbroker Sheikh Ahmad al-Fahad al-Sabah will go on trial in Switzerland this month accused of forgery in a case linked to political rivalry in Kuwait’s royal family. Lawyers for the sheikh say he will attend the hearing listed by a criminal court in Geneva to run from Feb. 22-26, 2021. (AP Photo/Eugene Hoshiko, fle)

GENEVA (AP) — Olympic powerbroker Sheikh Ahmad al-Fahad al-Sabah will go on trial in Switzerland this month in a forgery case he has said is linked to political rivalry within Kuwait’s royal family.

The case has essentially removed one of the most influential figures in world sports from public view — the so-called “Kingmaker” of Olympic and Asian soccer elections.

Lawyers for the sheikh told The Associated Press on Friday he will attend the hearing listed by a criminal court in Geneva to run from Feb. 22-26.

“He is absolutely determined to obtain a full acquittal and is confident about the positive outcome of the case,” Geneva legal firm RVMH said in a statement.

It is unclear when the panel of three judges could give a verdict.

Sheikh Ahmad earned his reputation as kingmaker of elections at the International Olympic Committee and other governing bodies within the Olympic family. An IOC member for nearly 30 years, the former Kuwaiti government minister has been a charismatic figure in sports diplomacy, often in business suit or jeans and his trademark ponytail hairstyle.

The sheikh’s influence grew with winning election in 2012 to lead the global group of national Olympic bodies, known as ANOC. One year later, he was a key campaigner helping Thomas Bach win the IOC presidency.

In November 2018, Sheikh Ahmad formally stepped aside — “temporarily self-suspended,” in the official Olympic phrase — from the IOC and ANOC after being indicted with four others by Geneva prosecutors.

The IOC said Friday its ethics commission “continues to monitor developments in the case and in particular the decision that may be taken by the Geneva judicial authorities.”

The sheikh has said a political rivalry in the oil-rich kingdom of Kuwait led to a former prime minister filing a criminal complaint against him in the Swiss city, a hub for banking and international arbitration cases.

A statement from Sheikh Ahmad’s personal office in 2018 claimed “the whole matter is based on allegations that are maliciously motivated by political factions within Kuwait since 2012.”

The criminal complaint alleges that Sheikh Ahmad and lawyers acting for him later took part in a false arbitration case in Geneva, staged to try to prove a video that circulated on social media was authentic and implicated Sheikh Nasser al-Sabah, the former prime minister, in financial and political wrongdoing.

“Related Kuwaiti domestic political issues, if any, are outside the scope of the court review,” they wrote in an emailed statement to the AP.

A five-day trial is scheduled to open at the Tribunal Correctionnel, which can impose prison terms of two to 10 years.

A verdict against Sheikh Ahmad could be appealed and further tie up a case that has moved slowly to its first court. In more than two years since the indictment, the sheikh has continued to lead the Olympic Council of Asia, which his family created, and worked in sports politics.

His ongoing influence was confirmed last month by a Court of Arbitration for Sport ruling in an appeal by a losing candidate in Asian soccer elections held in 2019.

Although Sheikh Ahmad has never joined the IOC executive board, he was a member of the FIFA ruling committee as an Asia delegate from 2015-17. He withdrew as a candidate for re-election after being implicated in a United States federal court of using OCA money to buy influence in Asian soccer politics.

He denied wrongdoing and, nearly four years later, prosecutors in Brooklyn have not publicly advanced that case.