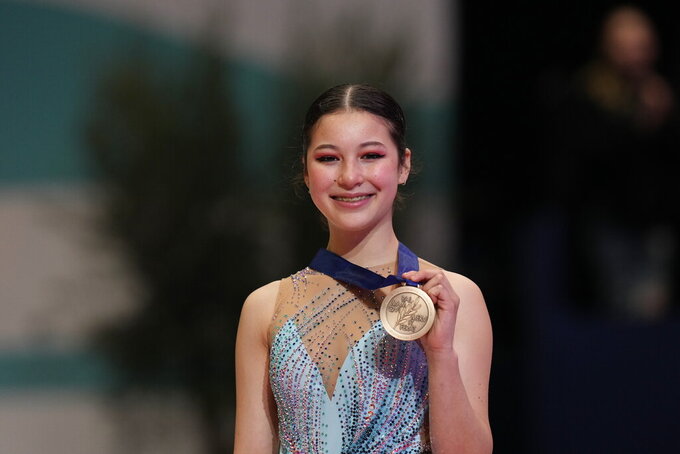 Alysa Liu of the U.S celebrates her bronze medal during the women victory ceremony at the Figure Skating World Championships in Montpellier, south of France, Friday, March 25, 2022. (AP Photo/Francisco Seco)

Considered the future of U.S. women's skating and already a two-time national champion, Liu posted her decision Saturday on Instagram.

“I honestly never thought i would’ve accomplished as much as i did LMAOO i’m so happy,” Liu said in her post. “I feel so satisfied with how my skating career has gone. now that i’m finally done with my goals in skating i’m going to be moving on with my life. ... this skating thing has taught me a lot more about life than i anticipated. i’m really glad i skated."

And skated better than any American woman at such a young age.

Using the triple axel that few U.S. women have landed successfully, Liu won her first national title in 2019 at age 13, and repeated the next year. She was too young to compete internationally on the senior level, however, and remained a force as a junior, getting comfortable with quadruple jumps as well.

But she lost to Bradie Tennell and Mariah Bell at the last two national championships, making the Olympic team despite having to withdraw from the trials in January when Liu tested positive for COVID-19.

Liu, of Richmond, California, recovered in time to skate in the Beijing Games, where she landed seven triple jumps in her free skate to finish seventh overall.

She then came in third behind Kaori Sakamoto of Japan and Loena Hendrickx of Belgium in a watered-down world championships with the Russian skaters not participating. It was the first medal at worlds for a U.S. woman since Ashley Wagner in 2016.

“I started skating when i was 5 so that’s about 11 years on the ice and it’s been an insane 11 years," she posted from Japan, where she was appearing in the Stars on Ice tour. "a lot of good and a lot of bad but (you know) that’s just how it is. i’ve made so many friends, and so so sooo many good memories that i’ll have for the rest of my life.”