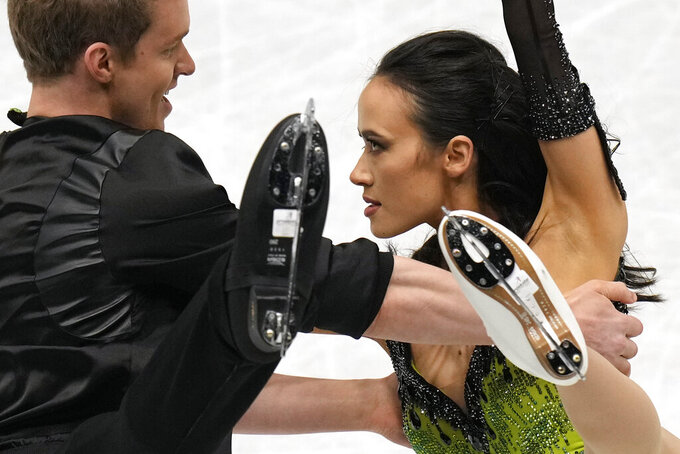 Olympic ice dance champions Gabriella Papadakis and Guillaume Cizeron shattered their own rhythm dance world record on Friday to take the lead over two American teams at the world championships in Montpellier, France.

With the backing of their home crowd, Papadakis and Cizeron scored 92.73 points to their program set to music by John Legend to beat their score from the Beijing Games by nearly two points. It also left Papadakis and Cizeron more than three points ahead of Madison Hubbell and Zachary Donohue heading into Saturday's free dance.

“I think it was better than at the Games. We were a little bit more relaxed, so I think it appeared in our skating.” said Cizeron, who along with Papadakis is a four-time world champ. “I think we're just getting better and better, which is good.”

It's going to be difficult to get too much better.

“There was a little bit of pressure that we did have because of the audience,” Papadakis said, “but at the same time, it was wonderful and was lifting us, too. It was very different, but definitely easier (than in Beijing).”

In the women's free skate, Kaori Sakamoto of Japan built on her big lead following her short program to win the world title with plenty of room to spare. Her score of 236.09 points allowed her to breeze past Loena Hendrickx of Belgium, who had 217.70 points, while Alysa Liu vaulted over American teammate Mariah Bell to take bronze.

The world championships conclude Saturday with the free dance and the men's free skate, where Shoma Uno leads Yuma Kagiyama and Kazuki Tomono as they try to hold off American phenom Ilia Malinin and claim a Japanese sweep.

Hubbell and Donohue, the Olympic bronze medalists who train with Papadakis and Cizeron in Montreal, scored a career-best 89.72 points in the final competitive event of their long and decorated career. The longtime standard-bearers for America ice dancing announced prior to the season that this would be their last together.

“We had the goal of staying focused but really letting the moment sink in a little bit more than at the Olympics,” Hubbell said. “Really living the joy of it and especially for myself, at the very end — from end of twizzles until the end — I had quite a fun moment. I was really just celebrating.”

Hubbell and Donohue's close friends, Madison Chock and Evan Bates, were third with 87.51 points from their rhythm dance, while Italy's Charlène Guignard and Marco Fabbri were fourth and Piper Gilles and Paul Poirier of Canada in fifth.

Victoria Sinitsina and Nikita Katsalapov, the silver medalists in Beijing, are among the many Russian skaters barred from competing in France. They also are two of several Olympic medalists facing a worldwide backlash after appearing at a rally to support President Vladimir Putin and the invasion of Ukraine.

Meanwhile, the Ukrainian ice dance team of Oleksandra Nazarova and Maksym Nikitin received a huge ovation from the crowd at Sud de France Arena for their rhythm dance. They even fared well enough to advance to the free dance Saturday.

“The bigger point is to tell the truth about what is happening in Ukraine,” Nikitin said, “and I hope this will help people in Ukraine who are now not safe — they are still in danger and lose their houses. I hope we can help all people in the world to understand what really happens because we saw it. Just six days ago we were in Ukraine.”

The pair had to travel through military checkpoints to reach Poland, then headed from there to France.

“For us it's not just a competition. It's something bigger,” said Nazarova, whose hometown of Kharkiv in the northeast part of Ukraine has been overrun with troops. “We saw the tanks, heard the shooting. My house doesn't have windows anymore. It is horrible running to the shelter holding a kid in your arms and I will not wish to anyone to live through it.”