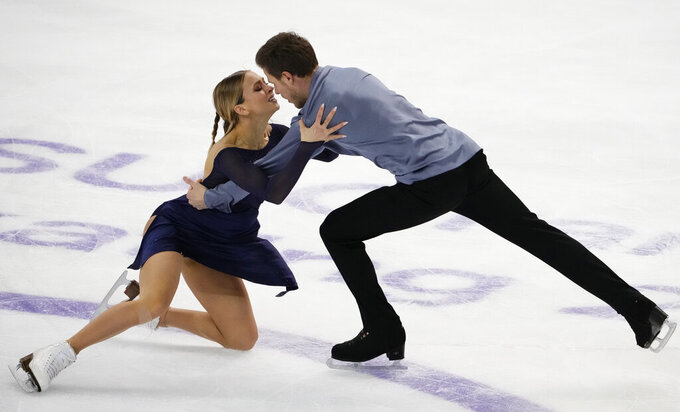 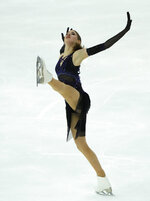 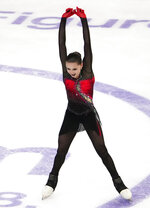 SOCHI, Russia (AP) — Kamila Valieva headed a Russian women's podium sweep at the figure skating Rostelecom Cup on Saturday to underline her status as favorite for the Olympic gold medal in Beijing.

The 15-year-old Valieva landed three quadruple jumps, two of them in combinations, to Ravel’s “Bolero” and scored 185.29 points in the free skate for a 272.71 total. Her short program, free skate and overall scores at the competition were all world records.

Valieva won by a crushing margin of 43 points from Elizaveta Tuktamysheva, the 2015 world champion who doesn't perform quad jumps but has stayed in contention with consistently strong triple jumps and presentation skills.

Tuktamysheva scored 229.23 to stay ahead of fellow Russian Maiia Khromykh, who had two quad jumps, stepping out on the landing of one of them. Khromykh's score of 219.69 reflected her strong recovery from an erratic short program as she took the final podium spot ahead of Mariah Bell of the United States.

Russian women have secured five of the six qualifying places for next month's Grand Prix Final in Japan as they fight for the country's three Olympic quota spots. The highest score by a women's skater other than Valieva this season is 236.78 for world champion Anna Shcherbakova in Italy this month.

Russia won three of the four disciplines overall on Saturday. Men’s winner, Morisi Kvitelashvili, represents Georgia but was born in Moscow and trains there with coach Eteri Tutberidze, the coach behind many of Russia’s Olympic and world championship-winning women’s skaters over the last decade, including Valieva, Shcherbakova and Khromykh.

Kvitelashvili became the first Georgian to win a figure skating grand prix after edging out Mikhail Kolyada and Kazuki Tomono in a tight contest.

Each of the top three skaters fell once in a free skate decided by close judging calls as Kvitelashvili won with a score of 266.33, pipping Kolyada on 264.64 and Tomono on 264.19.

Tomono was the leader from the short program and, skating last to music from the movie “La La Land,” was clean on two of his three quadruple jumps but fell on a triple axel. That helped to ensure he couldn't overtake Kvitelashvili, who overcame his own fall on a quad toe loop in his program to a Frank Sinatra medley.

Russian skater Kolyada had the best free skate score with 180.16 as he rose from fourth in the short program to second and secured a spot at the Grand Prix Final.

Russia swept the podium in the pairs as world champions Anastasia Mishina and Aleksandr Galliamov dominated the free skate after second place in the short program, to win with an overall 226.98 points.

Daria Pavliuchenko and Denis Khodykin were second on 212.59 and Iasmina Kadyrova and Ivan Balchenko took third on 193.58.

There was another Russian win in ice dance after Victoria Sinitsina and Nikita Katsalapov scored 211.72 to beat Italy's Charlene Guignard and Marco Fabbri by eight points and Canada's Laurence Fournier Beaudry and Nikolaj Soerensen by 20.