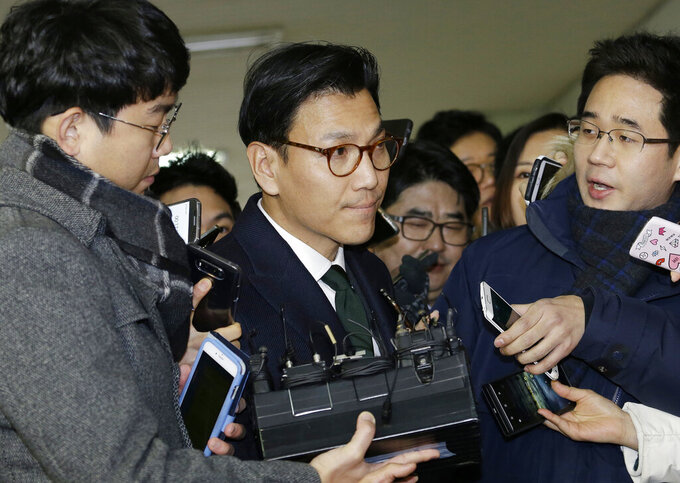 FILE - Kim Jae-youl, chief of the sports marketing unit of Samsung Group, center, arrives at the office of the independent counsel in Seoul, South Korea, on Dec. 29, 2016. A South Korean executive with Olympic sponsor Samsung has been elected president of the International Skating Union. Kim Jae-youl got 77 out of 119 votes in a four-person contest to lead the governing body of figure skating and speed skating. (AP Photo/Ahn Young-joon, File )

Kim Jae-youl garnered 77 of the 119 votes in a four-person contest to lead the governing body of figure skating and speed skating. The other candidates were from the United States, Finland and Serbia.

Kim, who leads Samsung Economic Research, previously had a senior position in the organizing committee for the 2018 Pyeongchang Olympics.

His other Olympic roles include an IOC-appointed seat on its program commission, which oversees picking sports for Summer Games and Winter Games, and he was on the IOC panel that oversaw preparations for the 2022 Beijing Olympics.

“I am very surprised and humbled by your overwhelming support,” Kim told ISU voters at their election meeting in Phuket, Thailand.

He succeeds Jan Dijkema of the Netherlands who stepped down after six years.