Shimabukuro inks another 4 years as US speedskating coach 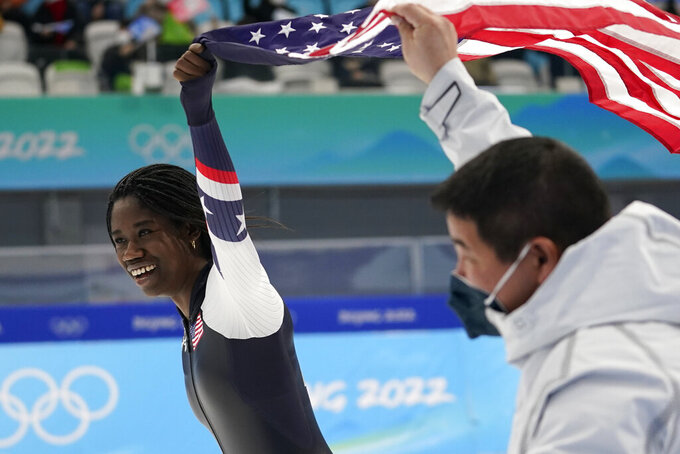 FILE - Erin Jackson holds up a U..S. flag with coach Ryan Shimabukuro after winning the gold medal in the women's 500-meter speedskating race at the Winter Olympics, Sunday, Feb. 13, 2022, in Beijing. Fresh off the best Olympic showing by the U.S. speedskating team in a dozen years, Shimabukuro is staying on for another four years as coach of the American squad. Shimabukuro posted a picture on his Facebook page Tuesday showing him signing his new contract at the Utah Olympic Oval in suburban Salt Lake City. (AP Photo/Ashley Landis, File)

Fresh off the best Olympic showing by the U.S. speedskating team in a dozen years, Ryan Shimabukuro is staying on for another four years as coach of the American squad.

Shimabukuro posted a picture on his Facebook page Tuesday showing him signing his new contract at the Utah Olympic Oval in suburban Salt Lake City.

“I’m very excited to continue with U.S. Speedskating for another Olympic quad,” he told The Associated Press. “It was 24 years ago that I got my start with the organization, so it really means a lot that they continue to believe and trust in me with our program.”

The new deal takes him through the next Winter Games at Milan and Cortina, Italy in 2026.

Shimabukuro coached a squad that won three medals at the Beijing Games in February, highlighted by Erin Jackson becoming the first Black woman to capture a speedskating gold with her victory in the 500 meters.

The three medals placed the Americans in a tie for fifth on the overall speedskating medal table and was the team's best performance since taking one gold, two silvers and a bronze at the 2010 Vancouver Games.

At the previous two Olympics, the U.S. had managed only a single bronze medal.

“Coming off of three medals in Beijing a few months ago, we have a lot to be proud of as a team,” Shimabukuro said. “The skaters and staff are fully committed to success in Italy in 2026, as we have a strong mix of veterans and rookies leading the charge.”

Jackson, Bowe and Mantia have all remained in the national training program for the upcoming season.

Shimabukuro bounced back after suffering a heart attack on Memorial Day weekend in 2019 while camping in a remote area of Utah.

He was flown back to Salt Lake City on a Life Flight helicopter and had surgery to put in a stent for a significant blockage.

“Obviously, I’m not invincible,” Shimabukuro told The AP at the Beijing Olympics. "The one thing I was worried about: Was I going to be able to continue to coach at this level with the amount of stress that’s involved?”

Shimabukuro made some changes in his professional life. He doesn't stay at the rink until all hours of the night, ensuring he has time to get adequate sleep. He also gave more responsibility to his athletes to keep up with their workouts and rehabs.

He may work fewer hours, but Shimabukuro still has the same passion for the sport that prompted him to leave his native Hawaii as a teenager to pursue the unlikely dream of becoming a long-track speedskater.

He failed to make the Olympic team as an athlete, but has become a mainstay of the American coaching staff and highly popular with his skaters.