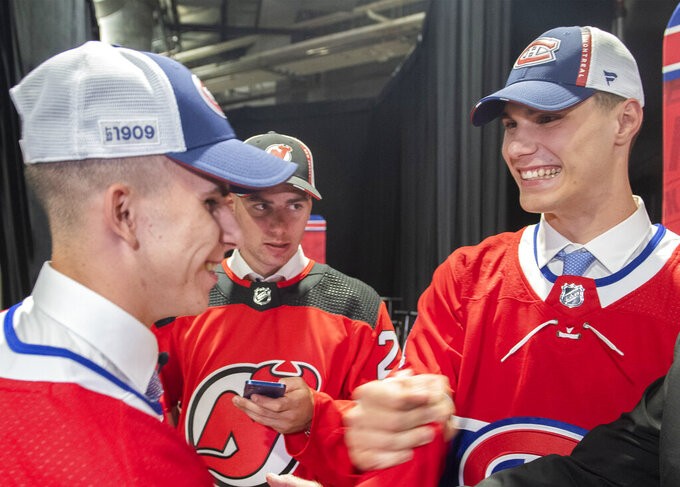 Juraj Slafkovsky, right, of Slovakia, greets countryman and fellow Montreal Canadiens draft pick Filip Mesar, left, as Simon Nemec, also from Slovakia and a New Jersey Devils pick, looks on during the first round of the NHL hockey draft in Montreal on Thursday, July 7, 2022. (Graham Hughes/The Canadian Press via AP)

MONTREAL (AP) — Juraj Slafkovsky embraced Simon Nemec and hugged Filip Mesar so tightly he picked his countryman up off the ground.

They had just made history as three players from Slovakia being selected in the first round of the NHL draft, and Slafkovsky and Nemec becoming the highest-drafted players in the nation’s history at Nos. 1 and 2.

“It’s just unbelievable moment for me, for my family and everyone who supports me and also for the whole Slovak country,” Slafkovsky said, beaming after being taken first by the Montreal Canadiens. “We needed something like this.”

Months after leading their team to its first Olympic medal, Slafkovsky and Nemec are ushering in a new golden generation of Slovak hockey. Decades after Zdeno Chara, Marian Hossa, Marian Gaborik, Pavol Demitra and Miroslav Satan put Slovakia on the map, the renaissance is just beginning, with a wave of talent pouring into the NHL in the coming months and years from the tiny central European nation of 5 million people.

“Small, but we have really good players, and now more and more players will be better like we are,” Nemec said after going second to the New Jersey Devils. “Everybody is proud, and we’re proud, too.”

Fewer are as proud as Craig Ramsay, a longtime NHL assistant who took over coaching the Slovak national team in 2017 and determined along with Satan, now general manager, to play a fast, up-tempo style that catches up with the evolution of the sport.

When he first arrived in Slovakia, Ramsay was stopped at the entrance to a grocery by a man who told him, “Thank you for coming and for what you and Miro are trying to do, but it won’t work here."

Except it did work. Success followed at world championships and then a bronze at the Beijing Olympics with a team featuring Slafkovsky and including Nemec and Columbus Blue Jackets prospect Samuel Knazko, all under 20 years old.

“We’ve started down the path of speed and compete and giving these young people a chance to play,” Ramsay said by phone Friday morning. “We’ve made that step.”

That step is drawing attention on the international stage and highlighting Slovakia’s best young talent for NHL teams searching for as much as skill as they can find. After taking Slafkovsky over Canadian center Shane Wright with No. 1 pick, Montreal selected Mesar later in the first round and the New York Rangers got 17-year-old Adam Sykora in the second.

“I’m so proud,” Sykora said Friday. “It’s great: the best draft for Slovakia. I try to enjoy the time with them.”

Sykora missed out on the celebration late Thursday but could reunite with Slafkovsky, Nemec and Mesar at the rescheduled world junior championships in August and join them in the NHL not long from now.

That Slovakia is training and developing so many good, young players is no coincidence. Columbus GM Jarmo Kekalainen, who worked for the Ottawa Senators when they selected Hossa and traded for Chara well before picking Knazko, praised Ramsay for trusting prospects with significant ice time and having the patience to tolerate the inevitable mistakes.

“An NHL coach having that kind of confidence in you at both the world championship level and in the Olympics tells me a lot,” Kekalainen told The Associated Press on the draft floor. “I give him a lot of credit the way he’s played the young kids and the success they’ve had. That’s great to see. It’s a good lesson. Sometimes we battle with the coaches about young talent maybe should get a little bit of leeway and get the better opportunity and the lack of experience is not always so bad.”

Ramsay was not afraid to promote Slafkovsky to the first line at the Olympics and was rewarded when the 6-foot-4 winger led the tournament with seven goals and was named most outstanding player. He told the Canadiens and Devils when they asked about Slafkovsky and Nemec that both need the chance to play and not be constrained.

“If you try to put these two kids in a box and make them play this particular style and be here, be here, be here, you might as well draft someone else because you need to let these kids play because they’re great and they’re going to get better,” Ramsay said. “(Slafkovsky), he wants to be the guy. He wants to dominate. And the same with Nemec. Nemec wants to be out there every second shift.”

One time in Beijing, Slafkovsky was. Ramsay used him to kill a penalty and hesitated about whether he should put his top line on the ice after it was over like he usually does.

Slafkovsky stared at Ramsay and nodded his head.

“He was ready to go,” Ramsay recalled. “I called their line and out he went and he played like he never missed a shift. He was just going.”

Ramsay said the Canadiens are getting someone who “lights up a room” and the Devils the best young player he has ever seen at reading plays. Sykora, he said, has a similarly bubbly personality to Slafkovsky, and all the Slovak players share a strong development process that has put them on the NHL’s doorstep as the pride of their country.

“They’ve had a few down years in draft here and now they have 1 and 2,” Kekalainen said. “It’s great for that country. They’ve produced a lot of really, really good players over the years. It’s a great country and great, proud hockey country.”