Slide over, bobsleds. Curling is coming to tropical Jamaica 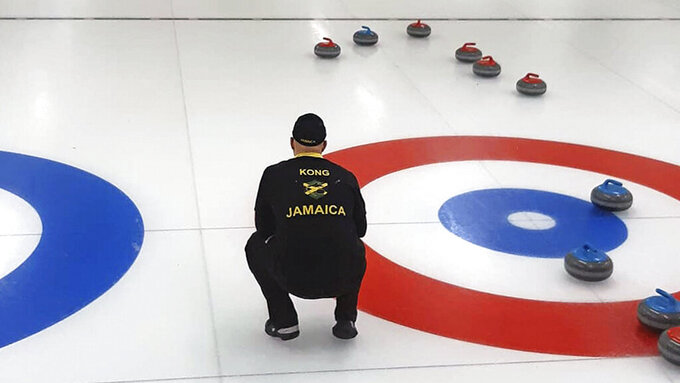 In this photo provided by Curling Jamaica, Jamaica's Ben Kong looks out at the sheet during a practice game against Hong Kong on Saturday, April 2, 2022, at the Unionville Curling Club in Markham, Ontario, Canada. The Jamaican curlers are sliding into the footsteps of the bobsledders that brought the tropical island nation to the Winter Olympics and became an international sensation. (Sandy Ewart/Curling Jamaica photo via AP)

Slide over, Jamaican bobsledders. A group of expats from the ice-free island are hoping to bring a whole new winter sport to their tropical homeland: curling.

Three decades after Jamaica crashed the Winter Olympics — and then crashed at the Winter Olympics — with the bobsled team made famous in the movie “Cool Runnings,” the country has joined the World Curling Federation. The status allows it to compete in international events, and the new national governing body is hoping that formal recognition will help the sport break through in a place better known for sprinters, reggae and rum.

“The bobsled team broke the ice — pardon the pun,” Curling Jamaica President Ben Kong said in a recent interview with The Associated Press. “Now there’s sort of an acceptance that Jamaicans can compete in any sport, even if it is a winter sport.”

Born on Scottish lochs and most popular among Scandinavians, Scots and Canadians, curling is riding a post-Olympic boost from TV viewers who quadrennially fall in love with the quirky sport with the sweeping and shouting and chess-like strategy. Lately, that's brought the sport to some new — and non-white — nations.

Since the Pyeongchang Games in 2018, the WCF has recognized federations in the Dominican Republic, Kenya, Bolivia, Turkmenistan, India and Kuwait. Jamaica is the first to join since the Beijing Olympics, earning conditional status last month as the third member from the Caribbean.

WCF President Kate Caithness called it “an exciting milestone for the sport as we continue to increase our members in nontraditional curling nations."

Curling Jamaica technical director Cristiene Hall-Teravainen, who moved to Toronto when she was 6, said that after taking up curling in Canada she saw exactly one other person of color in competitions: a Russian.

“Now with these other countries — with the WCF, I think they’re doing an amazing job of being inclusive, and promoting the sport around the world,” she said. “Africa, India — where there’s minorities playing the sport and loving it — I think it’s going to build and build and build. I see big things in the future.”

Kong, 46, moved to Canada as a baby but didn’t start curling until about a decade ago. “Then came the crazy dream about ‘Why don’t we put a Jamaican curling team together?’” he said.

Crazy, except for one thing: The Caribbean island where ice usually goes in drinks sent a bobsled team to the Olympics in 1988, a fish-out-of-water story chronicled in the 1993 Disney movie “Cool Runnings.”

It was the country’s Winter Games debut, and Jamaicans have competed at every Olympics since except for Turin, in 2006. In Beijing, Benjamin Alexander competed in the giant slalom — another first.

“They paved the way for Jamaica. It was huge what the bobsled team did,” Hall-Teravainen said. “I don’t think we’re riding their coattails, but we’re marching right behind them.”

In all, Kong has found nine women and five men, 12 of them living in Canada and two in the United States. Most are dual citizens.

Three of the women have competitive experience; Hall-Teravainen is the most accomplished of them, having once competed in Canada’s senior provincial championships. She figures to be the anchor of a Jamaican team that is hoping to compete in the World Mixed Championships in Aberdeen, Scotland, in October.

Of the five men, only one has played competitively. “Our men’s team, while we have enough warm bodies, that team needs some developing,” Kong said.

Curling Jamaica Secretary General Andrew Walker, a recreational curler who once won the Monday night house league at his home club, said finding other Jamaican curlers was “a lightbulb moment” for him.

Now he sees a spark in other Jamaicans’ eyes when they watch him curl.

“A young lady came up to me and said, ‘You know, I wasn’t going to come but then I saw you and I thought, “Hey, I can do that, too,”’” he said. “It gives people the permission to go out and give it a try. They can see someone like themselves.

“Because it was never there in their old country, they don’t seek it out. They’ll seek out soccer and cricket and what have you, but curling is not on the radar," he said. "So this will hopefully put it more on the radar.”

And he hopes WCF recognition will help get the word out.

“There are Jamaicans in every country on the planet. I’m quite sure out there in the Jamaican diaspora are curlers like myself — and better than myself,” Walker said. “This is the first step to let them know that we’re out here, and we want to hear from you.”

For now, the dozen Canada-based Jamaicans have set up a home base at the Unionville Curling Club outside of Toronto that, at more than 100 years old, is twice as old as the independent nation of Jamaica.

Their debut competition was a friendly coed scrimmage against Hong Kong in April that was limited to three-person teams because of pandemic protocols; Hong Kong was leading 10-4 after four ends when the sides decided that keeping score wasn’t the point.

Hall-Teravainen noted that it's not uncommon for even well-established curling programs to train abroad, where coaches and ice sheets and plentiful and the competition is robust.

“Even countries that have ice come here to train,” she said. “Jamaica has a hockey team that plays out of Florida.”

Kong said the goal is to build a program in which the curling is played “in Jamaica, by Jamaicans.”

And if Disney comes calling with a movie deal?

“I’m still thinking of what actor I want to play me,” he said.

AP Sports Writer Jimmy Golen has covered curling at three Olympics. You can follow him on Twitter at https://twitter.com/jgolen.