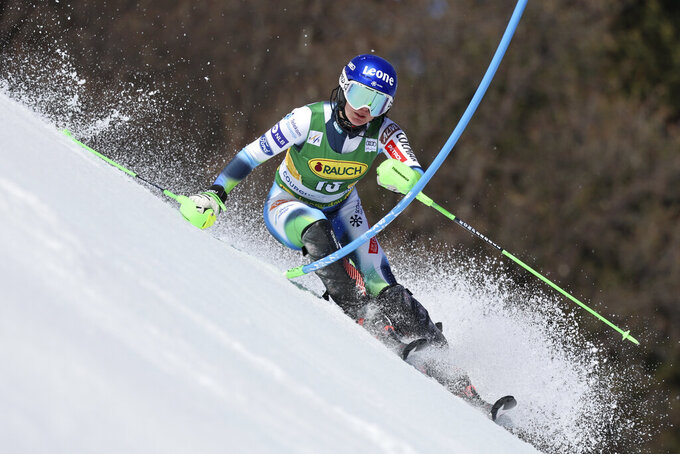 Andreja Slokar stepped up with a career-best result to win the slalom at the World Cup Finals meeting in the sunny French Alps.

The 24-year-old Slovenian skier finished 0.48 seconds ahead of Lena Dürr, who let another first-run lead slip as she did at the Beijing Olympics last month.

Vlhová, who won five of the previous eight World Cup slalom races, was 0.81 back in third.

Shiffrin had been fifth-fastest in the morning then dropped to finish eighth, 1.48 back. Only Slokar among the contenders found their speed on a second-run surface that degraded under a warming sun.

Slokar had won a parallel racing on the World Cup circuit in November, though never finished better than fourth in slalom during her career.

Her fifth-place finish at the Olympics, just 0.10 out of the medals, also hinted at her potential.

It was another disappointment for Dürr, who still seeks a victory after more than 100 starts in World Cup slaloms.

The 30-year-old German could not retain a 0.37 lead from the morning — and a 0.75 advantage over Slokar — though at least earned her fourth podium finish this season in slaloms. In China, her first-run lead slipped to a fourth place just 0.07 away from the bronze medal.

After the race, Vlhová was presented with the small crystal globe trophy for topping the slalom standings. She also won it in 2020.

Shiffrin will be presented with her fourth giant crystal globe as overall champion on Sunday, after the giant slalom that ends the women’s season.

She and Vlhová are in a four-way contest for the giant slalom discipline title with Olympic champion Sara Hector and two-time world champion Tessa Worley.