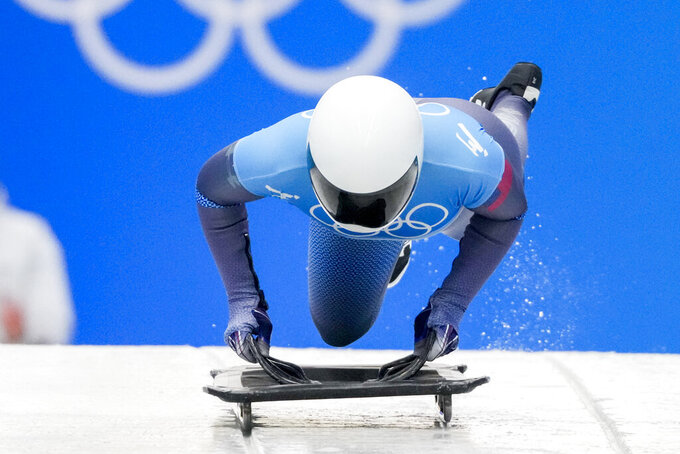 Kelly Curtis, of United States, slides during the women's skeleton run 2 at the 2022 Winter Olympics, Friday, Feb. 11, 2022, in the Yanqing district of Beijing. (AP Photo/Dmitri Lovetsky)

ZHANGJIAKOU, China (AP) — Nordic combined is a niche sport, even athletes in the discipline acknowledge, leaving Olympians who participate in the mix of ski jumping and cross-country skiing searching for options to fund their dreams.

Unlike some countries, the U.S. government does not pay Americans to go for gold. That leaves the United States Olympic & Paralympic Committee to allocate its limited financial resources to assist athletes with the best chances of earning spots on the podium.

That does not include Nordic combined.

To make ends meet, Ben Loomis and Jasper Good, U.S. Army specialists, enlisted to get pay and benefits as part of the World Class Athlete Program.

“It’s pretty special to go to the Olympics and represent the U.S. as both an athlete and a soldier,” Loomis said. “I don’t think there’s anything better than that.”

Without the program, Good might be back home in Steamboat Springs, Colorado, working for a living instead of competing at the Beijing Games.

“I don’t know if I’d be skiing, quite frankly," he said. “It’s given me the ability to make this a professional career. ... It has opened so many doors and created way more opportunities for me.”

The duo are among five from the Army program competing this year, joining Frank Del Duca and Hakeem Abdul-Saboor, both specialists and on the bobsled team, and luger Emily Sweeney, who is a sergeant.

“I think it’s the biggest honor and privilege that I can have," Sweeney said. “I’m so grateful to be a part of two amazing groups, right? We have WCAP and soldiers that comprise that group and then we also have Team USA, which is another incredible group of human beings."

The current athletes are following the same path that many have over the last quarter-century.

Since the Army's program started in 1997, about 60 Winter and Summer Olympians have taken advantage of the opportunity. Each goes through basic training, just like any other soldier, and is required to stay up to date on responsibilities such as weapons qualification.

The athletes receive the same pay and benefits, including a housing allowance, as other soldiers on active duty.

“I wouldn’t be able to do it without WCAP and I am extremely grateful for that," Abdul-Saboor said.

Good said he made a six-year commitment to the Army, adding he may be in the military even longer than that.

“I absolutely plan on staying in the Army for a while after I’m done with WCAP," he said.

While the Olympians make a lot of personal sacrifices to chase their dreams athletically, they also have to balance their commitment to the military.

In the end, though, they say it's worth it.

“Our sport is pretty niche in the U.S., so it’s pretty much up to us to fund that — whether fundraise for yourself or you work for yourself," Good said. “Quite honestly, (the program) changed the game for me. It opened up new doors, new opportunities."