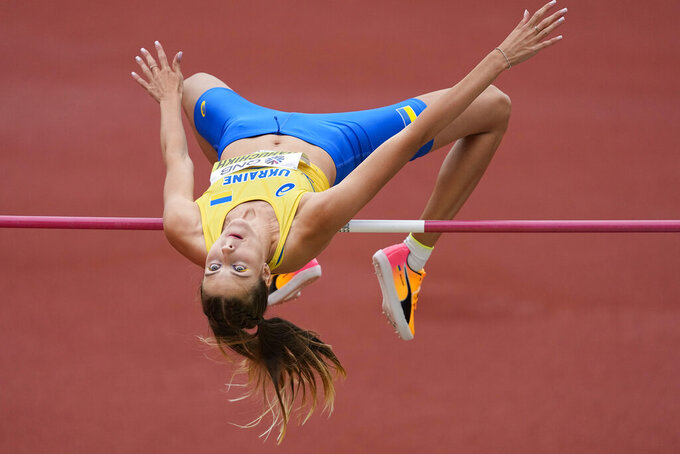 Yaroslava Mahuchikh, of Ukraine, competes during qualifying for the women's high jump at the World Athletics Championships on Saturday, July 16, 2022, in Eugene, Ore. (AP Photo/Gregory Bull)

EUGENE, Ore. (AP) — It took her three days by car to escape from Ukraine after the war started. Champion high jumper Yaroslava Mahuchikh can only guess at how long it will take to get back.

On her way out, Mahuchikh heard gunfire and could sometimes see shells raining down miles away. Though her hometown of Dnipro was far from the front lines of the Russian invasion, she could never shake the fear that when she said goodbye to her mom and dad and grandfather and sister, it might have been for the last time.

“When a war is going on," Mahuchikh said, “it’s highly complicated to say that any city is safe.”

Four months after that harrowing trip to cross the border in Serbia, the 20-year-old is at the track and field world championships, a world away in Eugene, Oregon.

She easily made it through qualifying Saturday, and is a favorite to win a gold medal Tuesday in part because her main rival, three-time world champion Maria Lasitskene, is Russian and not allowed to compete because of the war.

World Athletics President Seb Coe said that given the difficulties the 22 Ukrainians competing in worlds have endured simply to make it to this point, it would be “inconceivable” to think the Russians would've been allowed here to go up against them.

Mahuchikh agrees. In a series of in-person interviews and email exchanges with The Associated Press, she said that though the relationship between herself and Lasitskene was always cordial, it was never warm. Now, it might never be repaired.

“She wrote that she can’t compete because she’s Russian,” Mahuchikh said of Lasitskene's recent open letter that criticized Coe and International Olympic Committee President Thomas Bach. “And our people die because they’re Ukrainian. I don’t want to see, at the track, killers. Because it’s really killers, a lot of sportsmen who support this war.”

There are some Russian athletes who have backed the war, led by a handful of gymnasts including Ivan Kuliak, who wore a “Z” symbol in support of the war while standing only steps away from a Ukrainian athlete on a medal podium at a recent World Cup event. Shortly after, gymnastics officials stripped the medal from Kuliak and suspended him for a year.

Other Russians have promoted peace, including tennis player Daniil Medvedev, who was barred from competing at Wimbledon this year, and Alex Ovechkin, who plays for the NHL's Washington Capitals.

In her letter, Lasitskene, who won last year's Olympics to go along with her three straight world titles, commiserated with the plight of the Ukrainian athletes. They “are experiencing what no one human being should ever have to feel,” she wrote.

She also said keeping Russians out of sports did not stop the war “but on the contrary, it gave birth to a new one, around and inside the sports, which is impossible to contain.”

Missing in Lasitskene's correspondence, Mahuchikh said, has been outreach to the Ukrainians themselves.

“Russia is an aggressor country that launched a full-scale invasion of my country,” she said. “Many coaches and athletes have gone to the Army to defend our country; some are in hot spots, and some are imprisoned or killed. Sports infrastructure in many cities is destroyed. We can’t train in our native country.”

That Mahuchikh — or any of the Ukrainians on start lists this week at worlds — have made it to Eugene can fairly be seen as a triumph of persistence, logistics and an otherworldly ability to separate the day-to-day threat posed to their families and country from the day-to-day challenges an elite athlete must confront.

“They understand how important this is,” Mahuchikh's coach, Tetiana Stepanova, told the AP through a translator. “They walk through the airport. People see their Ukrainian uniforms and they walk up to us and form their hands in the shape of a heart. It means a lot."

After her perilous trip to Serbia, Mahuchikh resumed training again and tried to make things feel normal. Her mother, sister and niece made it out of the country and into Germany.

“It's better for them there,” Mahuchikh said. “We can stay in touch, and they can send me things, and I can relax and stay focused knowing that they're safe.”

Her father and grandpa stayed in Dnipro, located about 250 miles southeast of the Kyiv. Mahuchikh said they're safe there for the time being.

For a time, she stayed in Dnipro, But after a few weeks, her regular job beckoned and she had to leave behind the trips to bring food and clothes to hospitals and shelters, and stopping at places around Dnipro to help animals "They cannot leave," she said.

She sends money to friends and family back home when she can. This summer, her life is spent toggling between a steady stream of news updates, underscored by constant worrying, and a training regimen that, at first, had all arrows pointed toward the world indoor championships in Belgrade in March.

By that point, policy had already been set regarding the Russians in sports. Bach said the IOC's recommendation was as much for Russians' safety as anything. Coe said the World Athletics decision, which also excluded athletes from Russian ally Belarus, was a fairness issue.

“It was made for from a very clear standpoint, and that was about the integrity of competition,” he said. “It would have been inconceivable to have a world championships here with athletes from Belarus and Russia, two aggressive nations who have moved into an independent state.”

Mahuchikh — who won bronze last year at the Tokyo Olympics and preceded that with wins at every junior level since 2017 — captured the gold medal at the indoor championships. It was about more than simply jumping high.

“I realized that on the track and jumping, I could show the power and strong spirit of the whole Ukrainian nation,” she said. “I could show worldwide that we will fight until the end. Until we win.”

But there is no way to know when — or if — she'll return, or what her country will be like.

“It's so bad, and it's difficult mentally,” she said. “But I believe we will win and we will come back to our lives. And we will always remember this period of time.”