US men, women get baton around, advance to 4x100 relay final 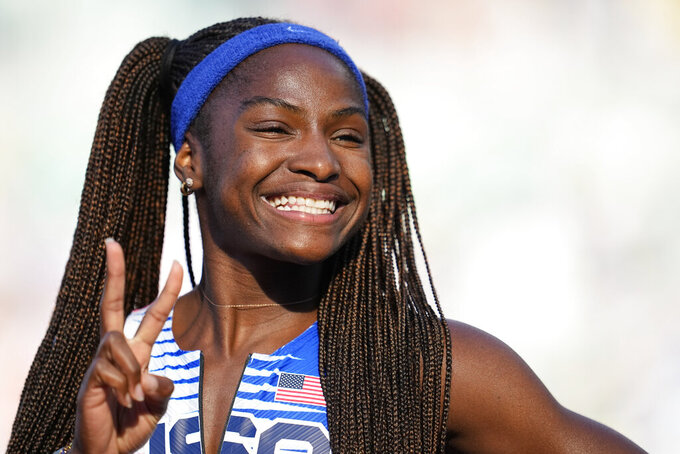 Twanisha Terry, of the United States, wins a heat during the women's 4x100-meter relay at the World Athletics Championships on Friday, July 22, 2022, in Eugene, Ore. (AP Photo/Ashley Landis)

EUGENE, Ore. (AP) — As he approached the finish line, anchor leg Marvin Bracy pretended the baton was a can, popped the top and took a giant gulp.

Good reason for the mini-celebration — the American men got the baton around in the 4x100 relay. That hasn't always been a guarantee. But the lineup of Christian Coleman, Noah Lyles, Elijah Hall and Bracy cruised into the final with the fastest qualifying time Friday night at world championships.

“Just having fun,” said Bracy, whose team finished in 37.87 seconds.

Now, a chance for a measure of atonement. The U.S. men had a faulty exchange at the Tokyo Games last year that kept them out of the final. That marked the 10th time since 1995 they have given away a relay at a world championship or Olympics, either due to a disqualification, a dropped baton, a doping violation or a faulty exchange.

No trouble this time. Although, a little anxiousness when it was announced there were two disqualifications. It was Nigeria and Japan.

Lyles didn't appear to be the least bit tired a day after winning gold in the 200 in an American-record time of 19.31 seconds. Lyles and Coleman helped the Americans to the 4x100 title at the 2019 world championships in Doha.

“We are super-excited,” Coleman said. “This is the fun part. If we put it together right, you know what I am saying, we can definitely come with the win.”

The U.S. won't have 100-meter champion Fred Kerley as an option for the final on Saturday. He hurt his leg in a semifinal heat of the 200.

The U.S. women had little trouble, too, with a lineup of Melissa Jefferson, Aleia Hobbs, Jenna Prandini and Twanisha Terry. The women captured silver in Tokyo.

“It felt comfortable to get the stick around,” said Terry, whose team finished in 41.56 seconds. “The conditions were great.”

They will be chasing defending world champion Jamaica, which qualified for the final even without using Shelly-Ann Fraser-Pryce, Shericka Jackson and Elaine Thompson-Herah — the 1-2-3 finishers in the 100 last Sunday.

“I was trying to not to be nervous, because I wanted to bring the baton safely,” said Remona Burchell, who ran the third leg for Jamaica.