US Olympic swim trials split into 2 meets because of COVID 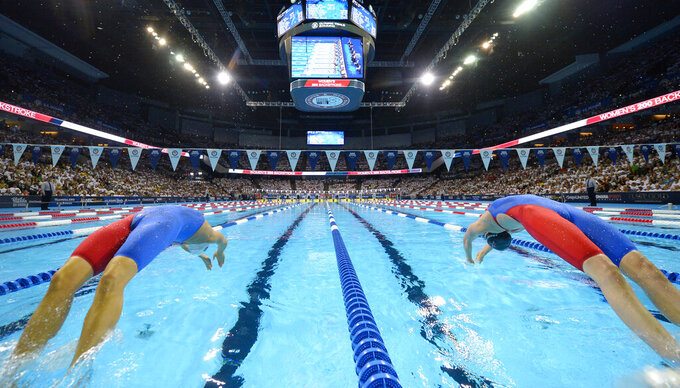 FILE - In this July 1, 2016, file photo, Elizabeth Beisel, left, and Missy Franklin start the women's 200-meter backstroke semifinal at the U.S. Olympic swimming trials in Omaha, Neb. The U.S. Olympic swimming trials will be split into two meets, a radical change that is designed to provide safer conditions in the midst of the coronavirus pandemic. USA Swimming announced Tuesday, Jan. 26, 2021, that a Wave I meet, comprised of lower-ranked swimmers qualifying for the trials, will be held on June 4-7. The top finishers will advance to the main Wave II meet on June 13-20 to determine who represents the U.S at the Tokyo Games. (AP Photo/Mark J. Terrill, File)

USA Swimming wanted to make its Olympic trials as safe as possible during a pandemic while providing a valuable experience to the next generation of stars.

The U.S. Olympic swimming trials will be split into a pair of meets, the governing body announced Tuesday — a striking change designed to provide more room for social distancing on the usually crowded pool deck,

The Wave I meet of lower-ranked swimmers will be held on June 4-7 in Omaha, Nebraska. The top finishers will advance to the main Wave II meet on June 13-20 — the already scheduled dates for the trials — to determine who represents the U.S at the Tokyo Games.

Both meets will take place in a temporary pool set up inside the CHI Health Center arena, which is hosting the trials for the fourth straight time going back to 2008.

Mike Unger, USA Swimming’s chief operating officer, said a test meet was scheduled in Omaha for June 4-5, which cleared the way for the change in format.

“We already had that event on the books,” he told The Associated Press. “Someone suggested we take the test event but don't call it a test event. Call it the trials."

The change is designed to reduce overcrowding on the pool deck, two adjacent warmup pools, and the athlete seating areas. The top 41 seeded swimmers in each event will automatically qualify for Wave II, which ensures that top swimmers such as Katie Ledecky and Caeleb Dressel are assured of a spot.

All others will have to swim their way in.

“We wanted to have enough people at the meet to keep the environment, keep the atmosphere, but also maintain things from a health and safety standpoint," Unger said.

The meet, initially set for last summer, was delayed a year after the Tokyo Olympics were postponed because of the pandemic, which has claimed more than 400,000 American lives and more than 2 million victims around the world.

Instead of limiting the trials to only the top-seeded swimmers, the governing body preferred a format that provided valuable experience to those who may be contenders in future years.

Unger noted that many top U.S. swimmers — including Ryan Murphy and Missy Franklin — didn't qualify for the Olympic team at their first trials.

“Maybe for 2024 or even 2028, these trials will provide the sort of learning experience that so many of our athletes had before actually making the Olympic team,” Unger said.

USA Swimming reviewed the last five Olympic trials going back to 2000 to determine the the lowest-seeded swimmers to qualify for an event final. Morgan Scroggy, seeded 41st, qualified for the 200-meter backstroke final at the 2008 trials.

Erin Phenix was the lowest-seeded swimmer to earn a spot on the Olympic team. She was 38th when she qualified as a relay swimmer for the 2000 Sydney Games by finishing sixth in the 100 free final.

Swimmers who do not meet the Wave II time standards before May 30 will compete in the Wave I meet. The top two finishers in each event will advance to Wave II, which will ultimately determine the U.S. team.

The newly adjusted standards also factor in a possible growth of 50-60 athletes per event in the four months leading into the Olympic Trials, generating a final field of approximately 750 total athletes in the Wave II meet.

Unger projects 600 to 700 swimmers will take part in the first meet.

While far fewer than the nearly 1,400 swimmers who were expected to take part in a single meet, USA Swimming still faces a daunting challenge to maintain safe conditions.

The organization is considering several options as part of its safety protocols, most notably reducing the number of swimmers, coaches, trainers and other officials milling around on the pool decks.

“If you're not swimming on a given morning, maybe you can't come to the venue," Unger said. “For instance, if you're only swimming on day four of the trials, maybe you're not warming up between 8 and 10 every morning to clutter the pool up.”

Local officials supported the decision to split the meet into two events. Josh Todd, executive director of the Omaha Sports Commission, said the new format “provides us with the opportunity to stage not one, but two marquee events in the city of Omaha.”

It has not been determined how many fans will be allowed in the arena, which will have a reduced capacity of about 14,000 after the pool is installed. That allows for the sale of up to 12,900 tickets per session, though USA Swimming isn't planning for a full house.

The goal is to have 60% capacity, which would allow for about 7,800 ticketed fans, Unger said.

All swimmers who take part in the meets, even if they don't qualify for Wave II, will go into the record books as a trials competitor.

“One of the gifts we give to our athletes at the trials is a kickboard with their name on it,” Unger said. “Everybody gets a kickboard.”