Winter Olympics may not include Nordic combined for 1st time 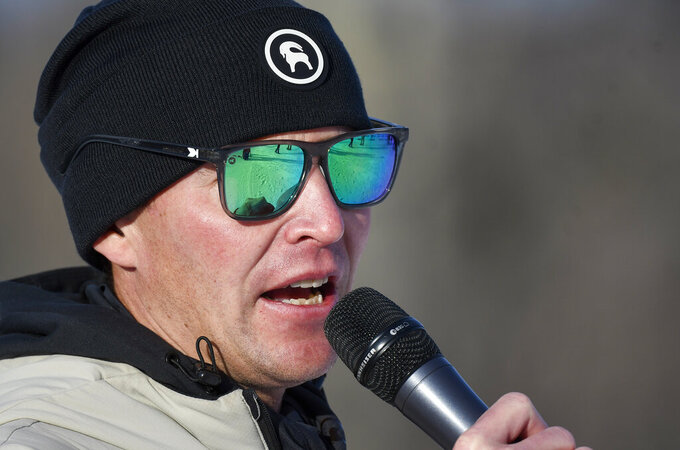 FILE - Billy Demong, a member of USA Nordic's board of directors, speaks during the cross country stage of the nordic combined 10 kilometers for placement on the U.S. Olympic team, at the Mount Van Hoevenberg Olympic Sports Complex on Dec. 24, 2021, in Lake Placid, N.Y. Nordic combined, which uniquely tests skiers on jaw-dropping jumps and heart-pounding trails, has been a part of the Winter Olympics since 1924. It is also the only Olympic sport without women.(AP Photo/Hans Pennink, File)

Nordic combined, which uniquely tests skiers on jaw-dropping jumps and heart-pounding trails, has been a part of the Winter Olympics since 1924. Its time might be up.

It is the only Olympic sport without women and the International Olympic Committee is due to make a decision later this month about whether to allow women to compete in Nordic combined at the 2026 Milan-Cortina d’Ampezzo Games.

There is the possibility, however, that Nordic combined is dropped entirely from the Olympics, according to athletes and advocates.

“What I heard loud and clear in back channels is that the solution to take care of the gender equity dirty secret is to take men out of the program for 2026," said Billy Demong, a five-time Olympian in Nordic combined and member of USA Nordic’s board of directors. “To take away one of the original sports from the first Winter Olympics would be tragic, short-sighted and misguided."

The IOC said final decisions on the 2026 Olympics program of medal events are scheduled to be decided at a June 24 meeting of its executive board, chaired by president Thomas Bach.

“We're seeing sports such as ski mountaineering added and I'm hearing the IOC does not want to increase the number of athletes and the solution is take men out of Nordic combined," Demong said Tuesday in an interview with The Associated Press.

Men in the Nordic combined have been publicly pushing on social media and elsewhere for women to be included, adding a mixed team format as another Olympic medal event, and are now bracing for their future as athletes on the world's stage.

Jasper Good, who competed for the U.S. earlier this year at the Beijing Olympics, said he was “blindsided” by the possibility.

“Information is trickling to us from athlete groups from around the world and national governing bodies, and most of us didn't realize the sport is in jeopardy," he said.

International Ski Federation Nordic combined race director Lasse Ottesen said he has not heard officially from the IOC about men potentially being eliminated from the Olympic program.

“We do hear speculation from different sides," Ottesen said Wednesday. “If the IOC, for some reason, would make a decision not to include women for the ‘26 events, what would happen with the men's? Would that be sort of a signal to say you're on for the ‘26 events, but for ‘30, we are thinking gender equality and then the men are out."

Nordic combined skiers must have finesse and fearlessness for ski jumping while training to have the strength and stamina necessary for a 10-kilometer cross-country course. The athlete who wins the ski jumping stage starts the cross-country race in the front of the pack, followed by the rest of the competition in their order of finish and then they race to the line for gold.

While Nordic combined is a fringe sport in the United States, it is very popular in parts of Europe and Japan.

Annika Malacinski is one of dozens of women around the world who have sacrificed a lot of time and money to go for Olympic gold. The 21-year-old Malacinski, who has American-Finnish dual citizenship and competes for the U.S., had high hopes of competing in China dashed in 2018.

The IOC executive board considered denied an application then that would have allowed her and other women to compete in Nordic combined at the Beijing Games. IOC sports director Kit McConnell said then that development in terms of the universality, competitiveness,and following was needed.

During the 2022 season, nearly 40 women competed at the highest level of the sport in a successful follow to the debut World Cup season for women a year ago.

“There's no reason that we shouldn’t be in the Olympics,” said Norway’s Ida Marie Hagen, who finished No. 2 in the World Cup standings. “The level is getting higher. There's also a lot of athletes from different continents.”

The IOC is proud to point to improvements made toward gender equality, saying the Beijing Games set new marks for female competitors by increasing participation to 45% from 41% in 2018. The 2024 Paris Games are expected to be the first Olympics with as many women as men competing.

Alas, the Olympics' Instagram post to point that out led to another round a flurry of responses calling for women to be included in Nordic combined.

“It makes it just so much more intense, especially when the decision is only a week away," Malacinski told the AP.