'Wow! Wow!' Women get Olympic track off to a sizzling start 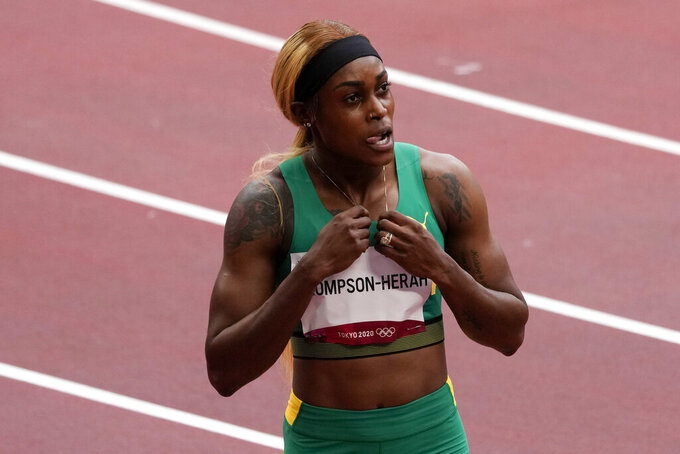 TOKYO (AP) — The look on sprinter Marie-Josée Ta Lou's face said everything. “Wow! Wow!” she screamed, her eyes wide open and her mouth agape as she crossed the finish line first and looked over at the clock.

A gold medal? No. But the opening day of track and field at the Olympics sure was a fast ride.

Ta Lou and a pair of Jamaicans blazed through their 100-meter heats on Friday to announce to the world that even with Usain Bolt gone from the sprint scene, there's plenty of speed to go around.

“I’m in shock, actually,” Ta Lou said after running 10.78 to set a career best in what is shaping up as a fast track in Tokyo. “But I know I’m ready.”

Combined with Ta Lou's run, those were the fifth, sixth and seventh-fastest times of the year. Seven of the 54 sprinters going through Round 1 hit a personal best. Switzerland's national record got broken not once, but twice.

“I mean, a lot of sprinters are dominating,” Thompson-Herah said.

All that happened even though the field was missing this season's third-fastest runner, Sha'Carri Richardson, who is back home in the United States following a doping ban. That was a topic nobody wanted to touch.

Five years ago in Rio de Janeiro, only one runner, Fraser-Pryce, cracked 11 seconds in the opening round. She went on to win the bronze, behind Thompson (who has since gotten married) and American sprinter Tori Bowie.

Fraser-Pryce came in as the favorite for Saturday's final, which is showing signs of living up to the hype. She ran a 10.63 back in June that has some thinking even Florence Griffith Joyner's world record of 10.49 seconds, or maybe her Olympic record of 10.62, could finally be at risk 33 years after they were set.

“Honestly, I have no idea,” Fraser-Pryce said when asked about the marks. “It’s super, super competitive. You want to make sure you focus on each round and the things you’re supposed to do.”

There were so many unknowns coming into the Olympics — namely if the year-long delay, the empty stadium or the stress of being cooped up in a hotel room in the lead-up to the Tokyo Games would hurt the athletes. At least one group — the women's sprinters — answered all those questions with an emphatic “No.”

Another unknown: Would this be a fast track?

“Clearly," said Daryll Neita of Britain, who ran a personal-best 10.96. "It’s going to be a very fast championship, let’s put it that way. It feels amazing.”

The first of 48 gold medals on the line over the nine-day meet went to Selemon Barega of Ethiopia in the men's 10,000 meters — a super-saturated race that left half the field sprawled out in exhaustion at the end of an 82-degree (27-degree Celsius) night with 82% humidity.

After two Olympics dominated by British great Mo Farah, Barega brought the gold medal back to the country that owned this distance for decades under the stride of Kenenisa Bekele and Haile Gebrselassie.

Speaking of sure things at the Olympics — the Americans encountered drama in a relay. This time it was in the debut of the mixed 4x400, where the U.S. got disqualified for a bad pass between Lynna Irby and Elija Godwin, only to later be reinstated on a middle-of-the-night appeal.

“Mistakes happen,” Godwin said long before the appeal had been filed. “We're human. We do make mistakes.”

Other Day 1 action went to form. Rai Benjamin of the United States and world-record holder Karsten Warholm of Norway cruised easily through their heats in the 400-meter hurdles, keeping a gold-medal showdown in the cards. Will it take another world record to win?

“Maybe someone else will do it,” Warholm joked. “I’ve done my job.”

Athing Mu, a contender in the women's 800, moved through the first round of her race and didn’t seem too bothered that the track announcer butchered her name. (For the record, it's pronounced “uh-THING moh”).

“I’m sure everyone saw my face,” the American said. “I don’t even know what he said. It was terrible.”

Ju'Vaughn Harrison made it to the high jump final, keeping alive the American's quest for a high jump-long jump double. Also advancing in high jump was world champion Mutaz Essa Barshim, who wowed his home crowd two years ago when he won the world title in Doha.

With thousands of empty green, white and burgundy seats staring back at them, all the “oohs" and “ahhs” for this one came from the athletes themselves. After Round 1 of that women's 100, there was plenty to get excited about.

“It’s whoever gets to the line first wins,” said Okagbare, whose 11.05 felt ordinary on this day. "Sometimes it’s not about the time, but about the position.”

But sometimes, maybe this time, it could be about both.