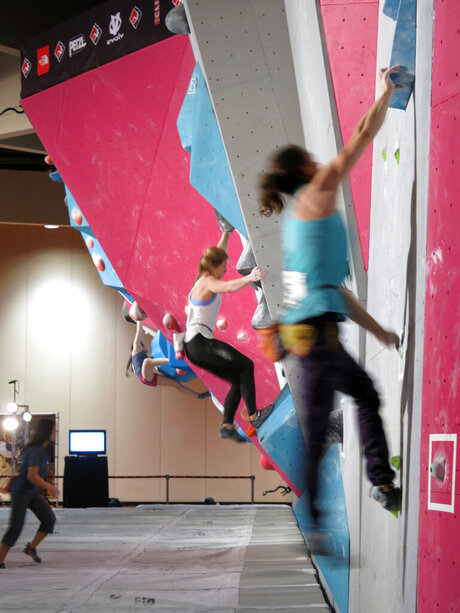 By: GENARO C. ARMAS (AP)
MADISON, Wis.Copyright 2020 The Associated Press. All rights reserved. This material may not be published, broadcast, rewritten or redistributed.
43.0731-89.4012

MADISON, Wis. (AP) — Climbing is on the precipice of becoming an Olympic sport, raising the profile of a recreational activity that is seeing a surge in young participants.

The ascent to potential Olympic inclusion got a boost on June 1 after the International Olympic Committee executive board gave its approval to include climbing along with four other sports: baseball-softball, surfing, karate and skateboarding. The IOC will decide in August whether to add the sports to the 2020 Tokyo Olympics.

Japanese organizers initially proposed the new sports in September and looked at climbing as a competition that could appeal to teens and young adult, an age where there is already increasing interest.

"My dream is to ... keep on helping getting (climbing) bigger and bigger so hopefully I can compete in the Olympics and win it maybe," said 15-year-old Ashima Shiraishi, a New Yorker whose parents were Japanese immigrants. Her spider-like ascents up rock walls and cliffs have made her a viral sensation online and drawn the curiosity of late-night television .

There were roughly 35 million climbers worldwide in 2015, according to the International Federation of Sport Climbing, up 40 percent from two years earlier. As of last fall, about half of the total was younger than 25 "thanks to the latest trend of urban/action sports," the federation said in a report.

USA Climbing had almost 3,800 registered members age 19 and under as of the 2015-16 season, an increase of nearly 90 percent in nine years — a boom that could position the United States to emerge as a top Olympic contender.

The United States "is already a very active country for climbing and we trust the national federation will keep on developing its expertise and keep on bringing kids to our competitions, which would be definitely a plus for a possible medal in 2020," said Anne Fuynel, spokeswoman for the international federation in Turin, Italy.

Many young climbers are getting a foothold indoors at climbing gyms, which have grown in number to nearly 400 across the United States. One young climbing star, 16-year-old Kai Lightner , got his start indoors after visiting a gym in Fayetteville, North Carolina, a decade ago.

"Kids like me have access to these resources that did not exist decades ago," Lightner said. "When you are able to start training at high levels, as young as 6, 7 years old, it shouldn't be surprising that kids are becoming more skilled at younger ages."

Techniques can be perfected year-round indoors. It's an option to fill time between soccer seasons for the average, on-the-go pre-teen in the suburbs.

Lily Canavan of Boston is one of the top competitors at her age bracket. Now 18, she got into the sport about eight years ago while attending a birthday party at a gymnastics facility that had a climbing wall.

The physical demands can be extreme, but Canavan is attracted by the mental side of climbing. Finding the right route and piecing it together with the right movements is like solving a puzzle.

"So you can be the strongest person ever and not be able to climb as (well) as someone who isn't strong," Canavan said.

USA Climbing's goal over the last 10 years has been to focus on developing its youth program. While Olympics inclusion has never influenced the organization's decisions, CEO Kynan Waggoner said, the potential addition to the Summer Games "can't do anything except promote the sport and raise the profile level, period."

In the 2020 Olympics proposal, competition would only take place on manmade structures, though it hasn't been determined if walls would be constructed indoors or outdoors. Participants would take part in the disciplines of speed, bouldering and lead (also known as sport), with results combined into one overall ranking system to determine medalists.

Waggoner said he likes the strides American climbers have made on the youth level in international competition. If the Olympics were held now, the United States would be competing with top contenders including France, Austria, Germany and Japan.

Waggoner stopped short of predicting how success now might translate to performance in four years, even with top young climbers like Shiraishi and Lightner presumably in the mix.

One wrinkle is that climbers usually specialize in one or two disciplines. For the Olympics, they would need to take part in three.