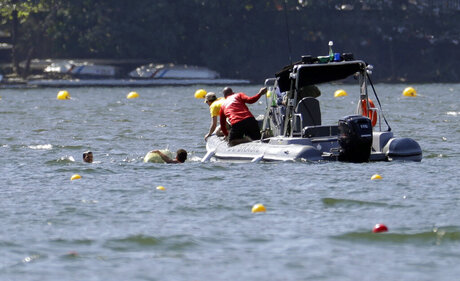 By: KARL RITTER (AP)
RIO DE JANEIROCopyright 2020 The Associated Press. All rights reserved. This material may not be published, broadcast, rewritten or redistributed.
-22.9028-43.2075

RIO DE JANEIRO (AP) — After all the talk about staying out of the water in Rio de Janeiro, Serbian rowers Milos Vasic and Nenad Benik found themselves immersed in it on Day 1 of the Olympic regatta.

The Serb pair capsized — a rare sight at elite rowing events — in the Rodrigo de Freitas Lagoon, where choppy waters left athletes struggling to stay in their boats.

"I can't recall ever being in a race where one of the crews has capsized," said New Zealand rower Hamish Bond, who won the qualifying heat with partner Eric Murray. "It's unfortunate for them."

Vasic and Benik overturned halfway through the 2-kilometer course. Stunned and soaked, they clung to their boat as the other three crews continued toward the finish line.

Normally crews need to cross the finish line to compete in the next round — swimming with their boat if necessary. But to save time race officials dropped that requirement, plucked the Serbs from the water and gave them a pass to compete in the repechage.

Bond said the conditions were at the "upper limit of what you hope to row in," but didn't think it was unfair because it was the same for everyone.

Others said the races should have been postponed.

"I was pretty close to sinking out there," said women's single scull world champion Kim Brennan, who finished third in her heat. "Normally this would have been deemed unrowable."

The world rowing federation decided to keep the competition going despite the rough conditions, because weather forecasts show "it's going to be even worse" in coming days, executive director Matt Smith said.

He said rowing has an extra day on the schedule in case of weather delays, and if that's not enough some rounds may have to be dropped.

Smith said it was the first time a boat had capsized in the Olympics since the Athens Games in 2004.

Before Rio, many rowers said they would try to avoid contact with the water in the lagoon because of concerns about pollution. But that proved hard on Saturday as the wind picked up and rowers struggled to keep their oars from bouncing off the waves on the race course.

British single sculler Alan Campbell said he was surprised by the conditions and that the water was much calmer in the days leading up to the Olympics.

"He needs to spread his arms a bit more to protect us," Campbell said, nodding toward the iconic Christ the Redeemer statue towering over the lagoon.