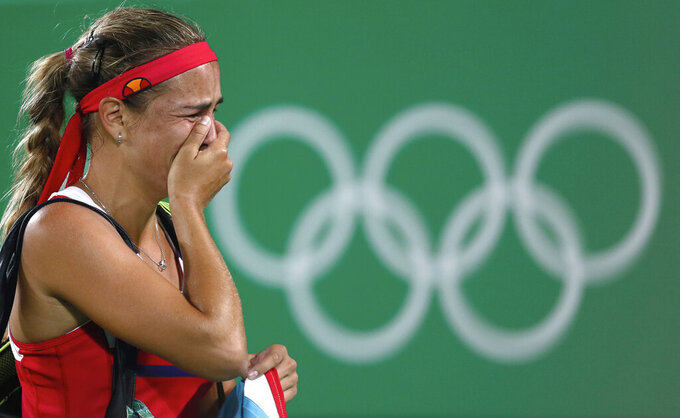 FILE - In this Aug. 13, 2016, file photo, Monica Puig, of Puerto Rico, cries after winning the gold medal match in the women's tennis competition at the 2016 Summer Olympics in Rio de Janeiro, Brazil. Puig announced her retirement from professional tennis at age 28 via a post on social media Monday, June 13, 2022. (AP Photo/Vadim Ghirda, File)

Puig became the first athlete to win gold for Puerto Rico in any sport at an Olympics with her women’s singles triumph in 2016. She also was the first woman representing her country to earn an Olympic medal of any color.

“After a tough 3 year fight with injuries and 4 surgeries, my body had enough,” Puig wrote Monday. “This decision isn’t an easy one because I would’ve loved to retire on my own terms, but sometimes life has other plans and we have to open new doors that lead to exciting possibilities.”

Puig said she will work for ESPN and will be “exploring consulting roles for young, up and coming tennis players, as well as with programs and academies.”

She leaves the tennis tour with a career record of 303-215, one WTA singles title in addition to her Summer Games victory, a career-best ranking of No. 27 and more than $3.5 million in prize money.

Puig stopped playing in the first set of what would be her final tournament match last month in France against Fiona Ferro. She played in one other official match this season, at the Madrid Open, losing to Australian Open runner-up Danielle Collins.

Otherwise, Puig had not competed since a first-round loss at the French Open in October 2020.

She announced in June 2021 that she would need to sit out the Tokyo Olympics and the rest of last season after having surgery on her right shoulder. That was her second operation to repair her rotator cuff and biceps tendon.

Puig also had surgery on her right elbow in December 2019.

At the Rio Olympics, Puig was unseeded and ranked 34th, but she capped a run of surprising results by beating three-time Grand Slam champion Angelique Kerber 6-4, 4-6, 6-1 in the final. That followed wins against two other major champions, Petra Kvitova and Garbiñe Muguruza. Puig was the first unseeded woman to win the singles title since tennis returned to the Olympics in 1988.

Puig’s best showing at a Grand Slam tournament was getting to the fourth round of Wimbledon as a teenager in 2013.

“Over the past 28 years of my life, tennis has been my constant. It has given me some of the most thrilling and memorable experiences I could have ever asked for,” Puig wrote Monday. “But, sometimes, good things come to an end.”