After fall, Lillard, Adebayo try to help US get up again 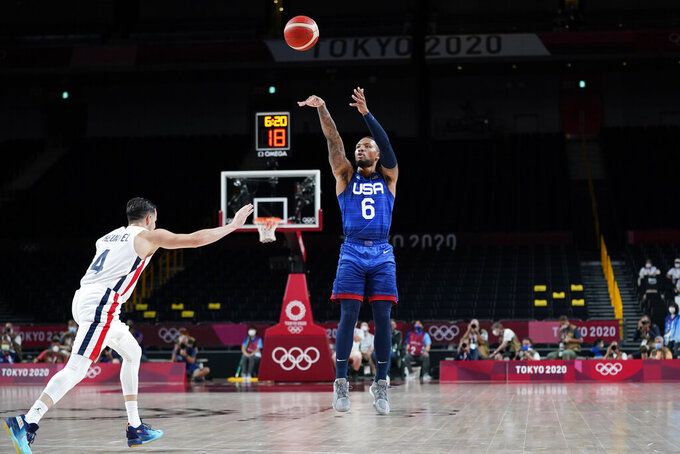 SAITAMA, Japan (AP) — Damian Lillard was nearly flat on his back, trying to save a possession the U.S. couldn't afford to lose.

He not only couldn't recover the ball after slipping but made matters even worse when he extended his leg and inadvertently tripped up France's Evan Fournier, getting called for an unsportsmanlike foul.

Lillard's stumble with 17 seconds left was one of the lasting images of the Americans' 83-76 loss in their Olympic opener. Now, just like its guard after that fall, the U.S. has to pick itself back up again.

“I think we are more than capable of doing it,” Lillard said.

Lillard and Bam Adebayo have already proven they can rise again after disappointment with the national team.

Both were cut in previous attempts to wear the red, white and blue but have returned to become two of the most important players on this year's team. They both were in the starting lineup Sunday and Adebayo was one of the Americans' best players, finishing with 12 points and 10 rebounds.

It was a strong debut he believes should have come two years earlier.

The Miami Heat star was in training camp with the Americans in Las Vegas but was dropped by coach Gregg Popovich before the team left for China and an eventual seventh-place finish in the Basketball World Cup.

Adebayo went on to help the Heat reach the NBA Finals in 2020 and Popovich acknowledged that perhaps the power forward should have made the team. Adebayo eagerly accepted when he got his second chance just two years later.

He was dropped by the Americans just before they left for Spain in 2014 for the World Cup, perhaps making him the best player cut by the U.S. since Jerry Colangelo started the national team program in 2005. The All-Star guard then needed time before he wanted to come back.

“I didn’t feel like I was above being cut or anything, I just felt like the time that was spent in the offseason, I just felt like I wasn’t given a great opportunity to make the team or make a different impression than that,” Lillard said. “So I think that that’s why it was a little bit of a sour taste in my mouth after leaving the team and I just decided for a few years that it just wasn’t something that I wanted to do.”

The U.S. kept Derrick Rose over Lillard that summer, allowing him to return from a couple years of knee injuries at the World Cup. Rose shot 25% in the tournament and missed 18 of 19 3-pointers, so it was easy to see why Lillard believed he would've been better.

The Americans needed quality guards in 2016 after All-Stars Stephen Curry, James Harden and Russell Westbrook withdrew from consideration, but Lillard didn't show any interest in those Olympics. He said he thought about playing in the 2019 World Cup but decided to pass.

USA Basketball officials usually just named their 12-player roster in the Olympic years but have made cuts a few times before the worlds. Trying to tell players they're not wanted at the time but might be in the future is something Colangelo has to navigate.

“Every player has his own way of dealing with something that doesn’t happen very often to players at this level, that they didn’t make a team,” Colangelo said.

“So it takes maturity, it takes the willingness to not look back and look forward and take advantage of the next opportunity. And they’re different for each of those two players, but ultimately it was the decision they both came to.”

The Americans will have to play better, starting Wednesday against Iran, if those decisions will pay off in gold.

“The next one is the most important,” Lillard said.