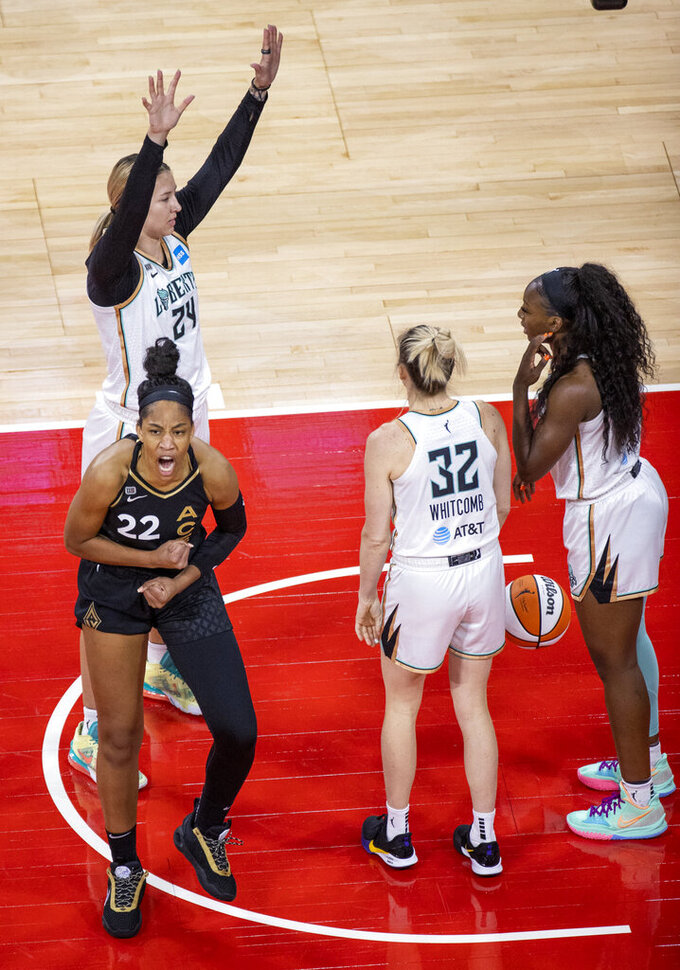 Las Vegas Aces forward A'ja Wilson (22) is pumped up after a score and a foul by New York Liberty forward Kylee Shook (24) during the first quarter of a WNBA basketball game Thursday, June 17, 2021, in Las Vegas. (L.E. Baskow/Las Vegas Review-Journal via AP)

The U.S. women's basketball team has a few questions surrounding its roster as the Americans prepare to make a run at a seventh consecutive gold medal in the Olympics.

There are six returning Olympians — Sue Bird, Tina Charles, Sylvia Fowles, Brittney Griner, Breanna Stewart and Diana Taurasi should make the team when the squad for the Tokyo Games is announced. The group has won a combined 15 gold medals.

All are playing well this WNBA season and, with the exception of Taurasi, are healthy. The WNBA's all-time leading scorer has been dealing with a fractured sternum suffered last month. The four-time Olympic gold medalist is expected to return to the Phoenix Mercury lineup in a few weeks and should be ready to go for training camp in Las Vegas in July.

Elena Delle Donne would be a lock to make the team as well, but she hasn't played in 18 months because of the coronavirus pandemic and a second back surgery. The former WNBA MVP and 2016 Olympic medalist hasn’t even practiced yet with the Washington Mystics this season.

It would be highly unlikely for Delle Donne to be on the roster if she doesn't return with the Mystics before the Olympic break.

That leaves six spots for Olympic newcomers out of the national team pool. The reigning league MVP A'ja Wilson is clearly a favorite to earn one of those spots. She was part of the World Championship team that won a gold medal in Spain in 2018. She would strengthen an already dominant U.S. post presence even more.

Nneka Ogwumike played on the 2018 World Cup team as well and is a strong candidate for her first Olympics. However, she suffered a Grade 2 left knee sprain at the beginning of this month so she would need to show she's 100%.

Napheesa Collier also could earn a roster spot. She was impressive in the U.S. camp a few years ago when she was still in college at UConn and is one of the rising young talents in the WNBA.

The guard spot is where the U.S. needs to find depth and potential starters for future Olympics. The leading candidates are Chelsea Gray, Skylar Diggins-Smith and Jewell Loyd, with Ariel Atkins, Arike Ogunbowale and Diamond DeShields also in the discussion.

All six have been impressive at times in U.S. training camps and during their WNBA seasons and could be the future of the guard position for the Americans once Bird and Taurasi retire.

There are other candidates in the 29-member national team pool, but some of them could play on the 3x3 team at the Tokyo Games. Kelsey Plum, Allisha Gray, Katie Lou Samuelson and Stefanie Dolson helped the U.S. qualify for the new Olympic contest and played extremely well together.