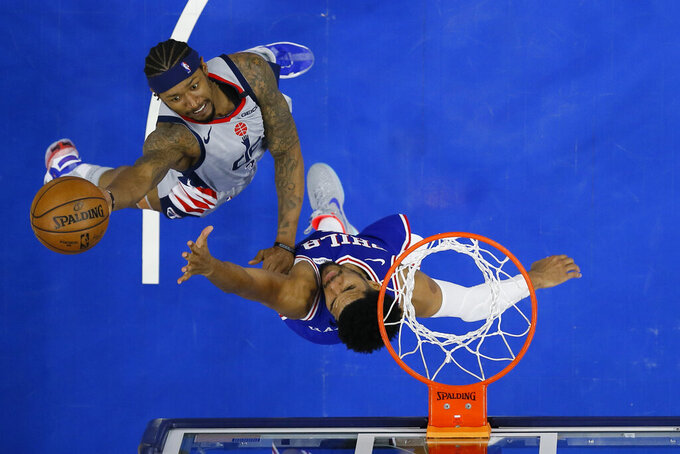 Washington Wizards' Bradley Beal, left, goes up for a shot against Philadelphia 76ers' Tobias Harris during the second half of Game 5 in a first-round NBA basketball playoff series, Wednesday, June 2, 2021, in Philadelphia. (AP Photo/Matt Slocum)

Bradley Beal won a gold medal with USA Basketball 11 years ago, leading the Americans in scoring on their way to an undefeated run at the Under-17 world championship.

He's looking for another gold this summer — on international basketball's biggest stage.

The Washington Wizards guard has committed to playing for the U.S. at the Tokyo Olympics, according to a person with knowledge of the decision who spoke to The Associated Press on condition of anonymity Friday because the team has not been revealed publicly.

Also Friday, the AP learned from a second person that Phoenix Suns guard Devin Booker has given USA Basketball his commitment to play in Tokyo. That person also spoke on condition of anonymity because the team announcement is still spending. ESPN first reported Booker's plans to be on the team.

It'll be the first Olympic appearance for both players. Beal was a candidate for the team that won gold at the Rio de Janeiro Games in 2016 and again for the U.S. team that finished seventh at the Basketball World Cup in China two years ago. Beal wound up withdrawing from consideration in 2016 because of injury concerns, and in 2019 for family reasons.

The Athletic first reported that Beal had decided to play.

Beal, a three-time All-Star who was announced earlier this week as an All-NBA selection for the first time, averaged a career-best 31.3 points for Washington this season.

He joins a backcourt that will include Booker as well as Portland guard Damian Lillard, who said Thursday that he has several reasons for wanting to play — the chance to be coached by Gregg Popovich among them. Booker, who is headed to the Western Conference finals for the first time, averaged 25.6 points this season.

The U.S. is also expecting forwards Draymond Green, a 2016 Olympic gold medalist, and Jayson Tatum to be part of the Tokyo-bound roster.

Some top names, such as LeBron James and Jimmy Butler, have already decided not to compete this summer for a variety of reasons.

USA Basketball has been aiming toward filling the 12-man roster for the Olympics by the end of this month.

The Americans — bidding for a fourth consecutive Olympic gold medal — will convene for training camp in Las Vegas on July 6. They begin play in Tokyo against France, a strong medal contender, on July 25.