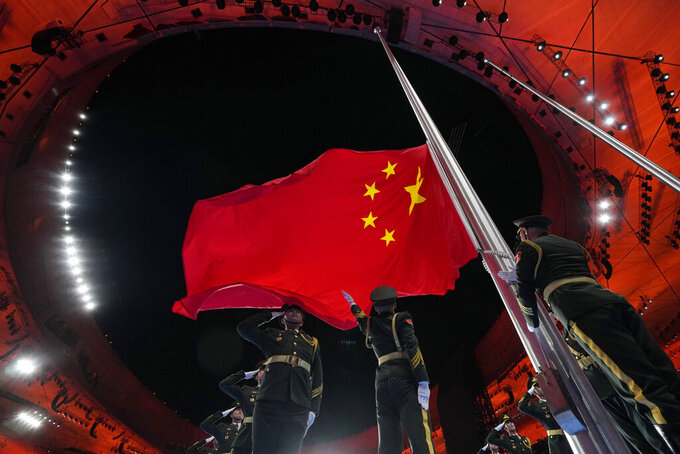 The Chinese national flag is raised during the opening ceremony of the 2022 Winter Olympics, Friday, Feb. 4, 2022, in Beijing. (AP Photo/Natacha Pisarenko)

His collar turned up against the cold, the head of the International Olympic Committee looked out over the stadium and spoke of the ideals that had brought together athletes from all over the world.

“In our fragile world, where division, conflict and mistrust are on the rise, we show the world that it is possible to be fierce rivals while at the same time living peacefully and respectfully together,” Thomas Bach, a gold-medalist fencer nearly 40 years ago, said Friday at the Winter Games’ opening ceremony.

Critics of Bach and the IOC say those ideals are nonsense, and talk of respect and bridge-building is overshadowed by Olympic officials cozying up to some of the world’s most powerful authoritarian rulers. Starting with holding this year’s Games in a country accused of widespread human rights violations.

The IOC knows that Beijing has locked up hundreds of thousands of minority Uyghur Muslims, those critics say, and arrested countless people who dared voice criticism of the government.

The IOC’s “failure to publicly confront Beijing’s serious human rights violations makes a mockery of its own commitments and claims that the Olympics are a ‘force for good,’” Sophie Richardson, China director at Human Rights Watch, said shortly before the Games opened.

Some rights activists are calling these Olympics the “Genocide Games,” and leaders of a string of democratic nations, including the U.S., Great Britain, Australia and Canada, are avoiding the Games, citing either Beijing’s human rights violations or its sweeping coronavirus restrictions.

Meanwhile, Chinese President Xi Jinping is hosting a parade of fellow strongman leaders, including Russia's Vladimir Putin, who met Friday with Xi before attending the opening ceremony, as well as the leaders of Egypt and Serbia, who were meeting with China's leader on Saturday.

The Games come at a time when democracy can look like it’s in retreat.

Over the past year there was a military takeover in Myanmar, Beijing’s tightening grip over Hong Kong and a brutal political crackdown in Nicaragua. There are authoritarian rulers from Turkey to the Philippines.

The IOC rarely mentions any of this.

Bach, for his part, has studiously steered around talk of human rights in China. He did say he would meet Peng Shuai, the Chinese tennis star who largely dropped from sight after accusing a former top Communist Party official of sexual assault, then later insisted she’d been misunderstood. Bach said she’d told IOC officials that she “that she can move freely, that she’s spending time with her family and friends.”

He said he’d support Peng if she wants an investigation. “But it’s her life, it’s her allegations,” he added.

“Sport must be politically neutral, but sport cannot be apolitical,” he once wrote, threading the phrasing needle so carefully his actual meaning is unclear.

But he knows it’s a gamble to make a stand on issues like human rights.

“If we are getting in the middle of tensions, disputes and confrontations of the political powers then we are putting the Games at risk,” he told reporters at a Beijing press conference.

Olympic organizers have a long history with authoritarian rulers, from Adolf Hitler in the 1936 Summer Games in Berlin to Vladimir Putin and the 2014 Winter Olympics in Sochi, Russia.

“There’s not a glorious history to look back on,” said Andrew Zimbalist, an economics professor at Smith College who has extensively studied the Olympics.

Take those Berlin Games. By 1936, Nazi antisemitism was blatantly clear, with laws that excluded German Jews from citizenship and banned marriage or sex between Jews and “citizens of German or kindred blood.”

Yet the Games went ahead. And two Jewish runners on the U.S. team, Marty Glickman and Sam Stoller, were pulled from the 4-X-100 meter relay squad one day before the race. U.S. officials insisted it had been done to bring in faster runners, but Glickman saw it differently.

“Here were two rather obscure Jewish athletes who could be kept off the podium so to not embarrass Adolf Hitler,” he said years later in an interview.

Zimbalist says the Olympic Committee is so risk-averse that it’s tarnishing its reputation.

“They pretend that they’re apolitical even though they make choices that are inherently political,” he said in an interview. They are “giving a level of approval to the Chinese by hosting the Games there. That’s a statement.”

He said the IOC can look for ways to speak out on issues like human rights while being careful not to spark a political firestorm.

“They’ve been working with the Chinese Olympic Committee. They know the limits (of speaking out) better than you or I,” he said. “I’d like to see the IOC testing some of those limits.”

Instead, the committee remains silent, and not just about China.

Putin, for instance, attended the Games' opening even though sports sanctions mean the country’s team must play as the “Russian Olympic Committee” because of a sophisticated doping scheme.

Putin and Xi used their meeting to project themselves as a counterweight to the United States and its allies. China has also been showing growing support for Moscow in its dispute with Ukraine, which has an estimated 100,000 Russian troops massed along its border, a predicament Washington fears could lead to all-out war.

With billions of dollars at stake for the host country, not to mention TV rights and sponsorships, the Olympics can seem as much about money as sports. The IOC is desperate for the Games to remain “brand safe,” so that sponsors, some of whom have reportedly paid hundreds of millions of dollars, don't see those investments backfire. These include some of the world's best-known brands, from Coca-Cola to Visa to Toyota. The last thing they want is for their products to be associated with Chinese human rights abuses.

But Christopher Magee, a professor at Bucknell University, noted that the IOC is just one of many players in China’s immense economy.

“It’s fair to criticize them for prioritizing money over humanitarian concerns," he said. “But a lot of firms and countries do that. It’s hard not to.”

The economies of nearly every nation in the world - including those whose leaders are boycotting these Games - are deeply intertwined with Beijing’s.

And every once in awhile, the IOC does speak up.

Some observers say Bach appeared to make an oblique reference to Ukraine in his opening speech, urging political leaders to “observe your commitment to this Olympic truth: Give peace a chance.”

But if it was a Ukraine reference, it was so oblique that many political and Olympic analysts didn’t even notice.

Tim Sullivan has been covering international affairs for The Associated Press for 25 years. Follow him on Twitter at @ByTimSullivan.