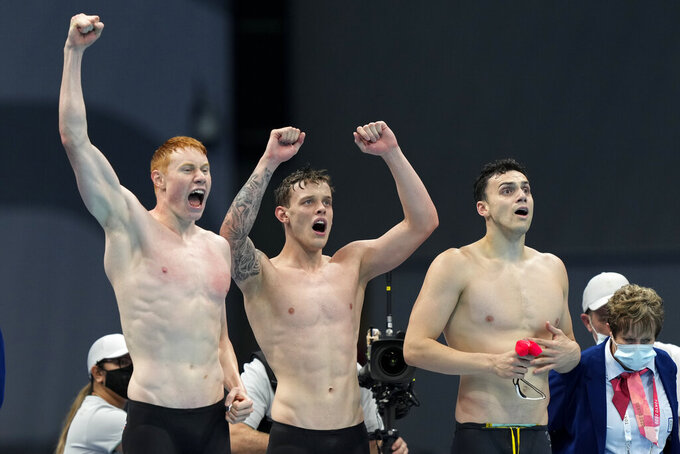 TOKYO (AP) — For the first time in more than a century, Britain claimed a relay gold at the Olympic pool.

The United States, shockingly, didn't even make the podium.

A dynamic quartet carried the British to a dominating victory in the men's 4x200-meter freestyle relay Wednesday.

“This has been years in the making,” Dean said. “We’ve been getting stronger and stronger.”

The British just missed the world record with a winning time of 6 minutes, 58.58 seconds.

The Americans set the record at 6:58.55 in rubberized suits at the 2009 world championships in Rome.

“We were so close to the world record in the end,” Scott said. “If anything, I’m a bit gutted.”

Imagine how the Americans must've been feeling.

For the first time in its proud swimming history, the U.S. failed to win a relay medal when entering an event.

Kieran Smith, Drew Kibler, Zach Apple and Townley Haas finished in 7:03.24, not only far behind Britain but also trailing Russia and Australia, which claimed the silver and bronze respectively.

The result outraged Michael Phelps, who was part of so many winning relay teams during his career and is now at the Tokyo Aquatics Centre as a television commentator.

Phelps criticized the American coaches for not including Caeleb Dressel on the relay, even though it's not clear if he had any desire to add another event to his already busy schedule.

“It’s shocking," Phelps said in an interview on NBC. "You know, in my opinion, he’s probably the best 200 freestyler in the world. He can probably put up one of the best times that we’ve seen. Leaving him off that relay, to me, I think makes it a lot harder to win the gold medal.”

Dressel swam a single 200 free race at the U.S. Olympic trials, then withdrew from the event. His Tokyo program includes three individual events — including the semifinals of the 100 free Wednesday — and three other relays.

While known primarily as a sprinter, Dressel has turned in plenty of fast times over 200 meters.

Without him, the American not only didn't win gold, they were shut out altogether.

The only other times that happened were at 1912 Stockholm Games, when the Americans didn't enter a team in the women's 4x100 free relay, and the 1980 Moscow Games, when they didn't show up at all because the Soviet invasion of Afghanistan.

The British made their own bit of history.

It was their first relay gold since that aforementioned women's 4x100 free in 1912, with their only victory coming in the men's 4x200 free relay at the first London Games in 1908.

But they hardly came out of nowhere.

They had the Americans in their sights ever since taking silver in the 4x200 at the Rio Games five years ago.

Now, with Phelps retired, longtime stalwart Ryan Lochte failing to make the Olympic team and Dressel focusing on other events, the British finally made it to the top.

“These four lads here, we’re the best freestylers in the world,” Guy said. “It’s just amazing the way things have progressed. Racing Michael Phelps, Ryan Lochte in Rio, and now we are the Olympic champions."