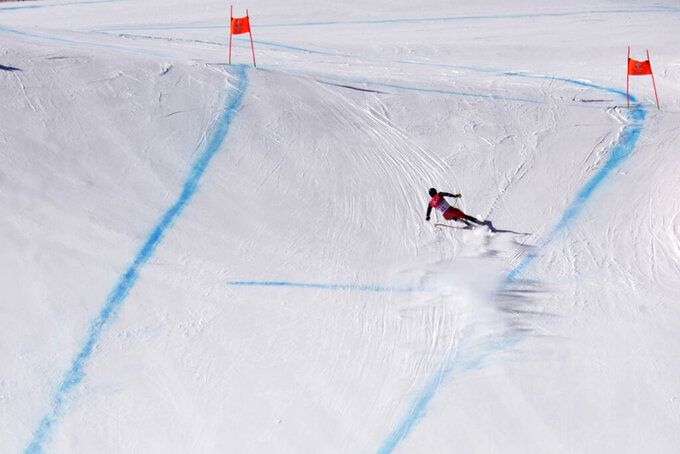 Broderick Thompson of Canada races down the course during a men's downhill training run at the 2022 Winter Olympics, Thursday, Feb. 3, 2022, in the Yanqing district of Beijing. (AP Photo/Luca Bruno)

BEIJING (AP) — One was a figure skater. One was a hockey player. Another was — shh, don’t tell anyone! — “never a hockey guy” and always preferred skiing and mountain biking over the national sport.

One thing that the new generation of Canadian downhillers have in common with each other, though, is that they all grew up racing in the Whistler Mountain Ski Club.

They don’t have a nickname yet. But like the Crazy Canucks and Canadian Cowboys of yesteryear, they’ve got plenty of speed and they want to show it at the Beijing Olympics.

Brodie Seger, Jack Crawford and Broderick Thompson are each in their mid 20s — still young for downhillers — and have been flying under the radar as they post one solid result after another.

At last season’s world championships in Cortina d’Ampezzo, Italy, Seger and Crawford had fourth-place finishes in super-G and combined, respectively.

Like in Cortina, the speed course in China is completely new.

“It’s kind of like Cortina last year; that was a new venue on that speed track and interesting to see it shook down with the veterans not having any experience,” Seger said. “They weren’t any more prepared than us younger guys. And I think Beijing will very much be the same thing.”

If Thursday’s opening downhill training session was any indication, the Canadians might do fairly well. The top four finishers all missed gates — making fifth-place finisher Crawford the leading skier who completed the course correctly and Thompson fourth in the revised classification.

“Everyone is hungry and the team is in a good place to push,” said Thompson, who earned his first World Cup podium with a third-place result in a super-G in Beaver Creek, Colorado, two months ago.

Last month, Crawford posted fifth- and sixth-placed finishes in Wengen, Switzerland, and Kitzbühel, Austria, on back-to-back weekends. Then he won a second-tier Europa Cup downhill in Austria just before flying to China.

Following a family tradition, Thompson was a figure skater until he was 16.

“I was doing triple loops and double axels,” he said.

Thompson has a younger sister who performed in Disney on Ice, and his older sister, Marielle, was the 2014 Olympic champion in ski cross. The background and jumps from skating help Thompson in skiing.

“We were all figure skaters growing up and skiing was always a big part of our family,” Thompson said.

Crawford was a competitive hockey player until he was about 17 before switching to skiing full time.

“I was never a huge fan of the team sport. Having a team around you is always fun, but in hockey the team I was on was a little bit toxic," Crawford said. “I just enjoyed skiing more.”

Like Thompson, Crawford still benefits from his former sport. He learned to train hard in the gym for hockey.

“For skiing, we had to dryland train really hard and at that age none of the guys did,” Crawford said. “So that was an advantage for me.”

As for Seger, his main sports have always been skiing and mountain biking.

“I’ve never been a hockey guy,” Seger said. “In the winter my family would go to Whistler from Vancouver and ski on the weekends and summers all go mountain biking.”

One of the only guys on the team who stays up late at night to watch hockey games from back home while in Europe is downhill coach John Kucera.

“This might sound terrible as Canadians, but we don’t have a ton of diehard hockey fans on this team,” Seger said.

“I started with these guys on the junior team six or seven years ago,” Kucera said. “We won a bunch of NorAm titles a few years back. And now I’ve just transitioned up with this group to World Cup. ... So there’s a lot of continuity, a lot of trust. And I think that helps drive a lot of success.”

Phil McNichol, a former head coach of the U.S. Ski Team during the Bode Miller years, is the Alpine director for the Canadian team.

Another connection to the Cowboys was made in Whistler, where Thompson is a neighbor of Robbie Dixon, another former racer.

Now all this group needs — besides some medals — is a nickname. That’s been a Canadian tradition since the Crazy Canucks rose to prominence in the 1970s and 80s with the likes of Ken Read, Steve Podborski and Dave Murray.

“I think it’s up to (the media) to come up with the name,” Seger said. “We’ve had this question a lot. That’s kind of how we’ve been rolling. ... It’s going to be more time that tells what sticks.”