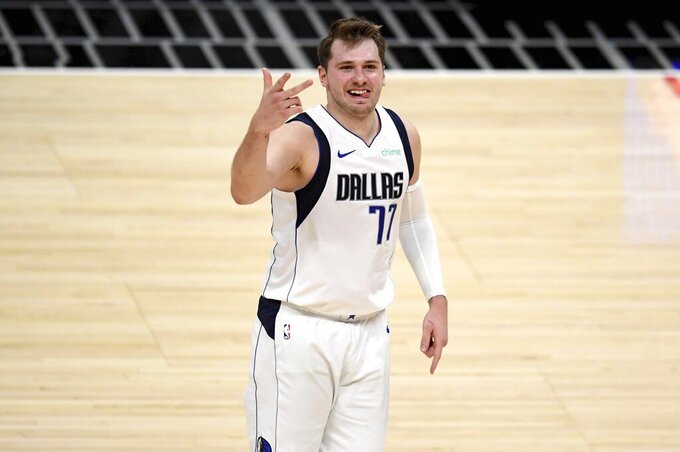 Luka Doncic #77 of the Dallas Mavericks reacts after shooting a three pointer against the LA Clippers in the second half of game five of the Western Conference First Round NBA Playoff basketball game at the Staples Center in Los Angeles on Wednesday, June 2, 2021. (Keith Birmingham/The Orange County Register via AP)/The Orange County Register via AP)

Most of the members of Slovenia’s basketball team charged toward Luka Doncic moments after the final buzzer sounded Sunday, determined to get him onto their shoulders and carry their best player around the court in celebration.

He lifted them, so they lifted him.

Doncic and Slovenia are headed to the Olympics for the first time, after winning 96-85 at Lithuania on Sunday to clinch a spot in the Tokyo Games. Doncic — the MVP of the tournament in Kaunas, Lithuania — was simply brilliant: 31 points, 11 rebounds and 13 assists, the first triple-double by any player in any of the four Olympic qualifying tournaments that were played in the past week to determine the last four teams in the Olympic field.

“I don’t care about the MVP,” Doncic said. “We won here. We’re going to the Olympics, the first time in our country. It’s amazing. I think every kid dreams about being in the Olympics. I did, too. So, here we are. We fought really, really hard and I think we deserve to be here.”

The game was tied 52-52 at halftime, and Slovenia opened the third on an 11-2 run. Lithuania eventually closed within 71-69, but a 14-0 run by Slovenia put Doncic’s club in control for good.

And when the last few seconds ticked away, Doncic threw his arms skyward in celebration.

“We’re making history for our country,” Doncic said. “We can just go up from here.”

Lithuania was one of four nations playing host to Olympic qualifiers that ended Sunday, all four being winner-take-all events, one team from each region making the Tokyo field.

And all four home teams, which figured to have major advantages by being at home, fell short of the Olympics. Slovenia beat Lithuania in the final, Croatia and Canada lost semifinal games — and Serbia, the reigning Olympic silver medalists, were stunned in a regional final Sunday by Italy.

Slovenia will be placed in Group C for the Tokyo Games, one of the three four-team groups at the Olympics. Slovenia will play Argentina on July 26, Japan on July 29 and reigning World Cup champion Spain on Aug. 1. The top two teams in each group, plus two wild-cards, will make the Olympic quarterfinals.

“It’s just one of the best feelings,” Doncic said. “We worked hard for this.”

Vlatko Cancar scored 18 for Slovenia, which got 16 from Jaka Blazic and 13 from Mike Tobey.

Jonas Valanciunas, Arnas Butkevicius and Mantas Kalnietis each scored 14 for Lithuania, which will miss the Olympics for the first time since getting its independence from the Soviet Union; it had been to each of the past seven Olympics, starting in 1992.

Italy went into Serbia and pulled off a stunner, eliminating the team that finished second behind the U.S. at the 2016 Rio de Janeiro Games.

Nico Mannion scored 24 points, Achille Polonara scored 22 and Italy reached the Olympics for the first time since the 2004 Athens Games — leading by as many as 24 before a stunned arena in Belgrade.

Simone Fontecchio scored 21, Stefano Tonut added 15 and Alessandro Pajola added 10 for Italy. The Italians will be Group B at the Tokyo Olympics, facing Germany — another winner on Sunday — on July 25, Australia on July 28 and Nigeria on July 31.

Patrik Auda led a balanced effort with 20 points on 8 for 9 shooting, and the Czech Republic — which stayed alive in the tournament by winning a pair of down-to-the-wire games — is headed to the Olympics for the first time after running away from Greece.

Jan Vesely (16), Jaromir Bohacik (15), Ondrej Balvin (14) and Tomas Satoransky (12) reached double digits for the Czechs, who beat Uruguay by one point just to make the semifinals and then ousted Canada by two points in overtime to make the final.

The Czech Republic will be in Group A at the Tokyo Games, facing Iran on July 25, France on July 28 and the U.S. on July 31.

Giorgios Papagiannis scored 14 for Greece, which got 12 points from both Konstantinos Mitoglou and Giannoulis Larentzakis, and 11 from Kostas Sloukas.

Moritz Wagner scored 28 points and Germany is headed back to the Olympics for the first time since 2008, after topping Brazil to win the qualifying tournament in Split, Croatia.

Germany will be in Group B at the Tokyo Games, facing Italy on July 25, Nigeria on July 28 and Australia on July 31.