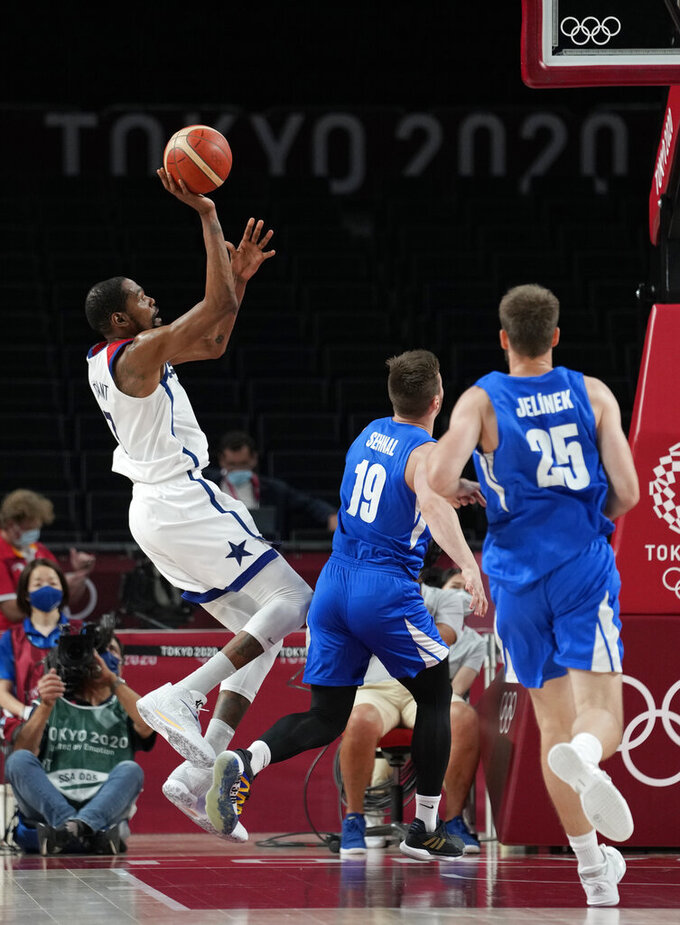 SAITAMA, Japan (AP) — Kevin Durant had been just ordinary so far in these Olympics.

Not on this U.S. men's basketball team, an unproven and for now still unspectacular group.

Durant is the top scorer to ever wear the red, white and blue, a player who has been unstoppable on the international stage from the moment he arrived.

He finally showed that off again Saturday night with 23 points in the Americans' 119-84 victory over the Czech Republic in their final game of group play.

“It’s literally our third game of all us together,” guard Jrue Holiday said, “but we knew KD would come in and do what he was supposed to do, do what he always does.”

And just what the U.S. needs.

The Americans are still learning each other and the international game, with differences from the NBA in the way it's played and officiated.

Durant has already mastered it.

And now he can teach this group.

He doesn't try to be a vocal leader, relying more on the way he plays and practices to set an example for his teammates.

Sure, the three-time Olympian shared some stories about the opening ceremonies or his other experiences to some of the newcomers, but he's not about to talk their ear off about how to play what he calls a simple game.

“It’s basketball at the end of the day,” said Durant, who has played for the U.S. as well as anyone who had ever done it — if not better.

He now has 354 points in his 19 Olympic games (18.6 per game), surpassing the 336 that Carmelo Anthony scored in his four Olympics.

But Durant hadn't been sharp yet in Japan, shooting just 4 for 12 in the opening loss to France and scoring 10 points in both games.

“I think it was just a matter of time,” Holiday said.

U.S. officials weren't sure of their chances at the world basketball championships in 2010, after none of the veterans from the 2008 Olympic gold medalists opted to play and left the Americans with a number of players in their early 20s.

Durant averaged 22.8 points and won tournament MVP honors as the Americans won gold and he never slowed down once he made the Olympic roster two years later.

Though it would become a blowout, the Americans were trailing early into the second quarter Saturday before Durant heated up. His 3-pointer with 6:18 remaining broke Anthony's record and he followed by hitting another on the next possession.

He kept rolling into the third quarter and by then his teammates had loosened up after their uneven start and surged into the quarterfinals with ease.

Durant is still a long way from the top scorers in Olympic history. Brazil's Oscar Schmidt scored 1,093 points and Andrew Gaze of Australia had 789. Both of them appeared in five Olympics.

But Durant views himself as far more than a scorer, anyway. He finished with eight rebounds and six assists, both team highs, and also a blocked shot that started a fast break while playing inside for an undersized U.S. team.

In his first season back from a ruptured Achilles tendon that forced him to miss a season, Durant had to do it all for the Brooklyn Nets at the end of the playoffs. Even though Kyrie Irving and James Harden were both injured in the series, Durant carried the Nets to a Game 7 against eventual champion Milwaukee in the second round. He had 49 points and a triple-double in Game and 48 in Game 7.

He won't have to score that much on this U.S. team, but he's ready to do whatever is required.

“I’ve had a lot asked of me for every team I played for since I was 8 years old,” Durant said.

“I feel like I have to be prepared to do everything single thing on the court.”