A flame, a look, one of the Olympics' most powerful moments 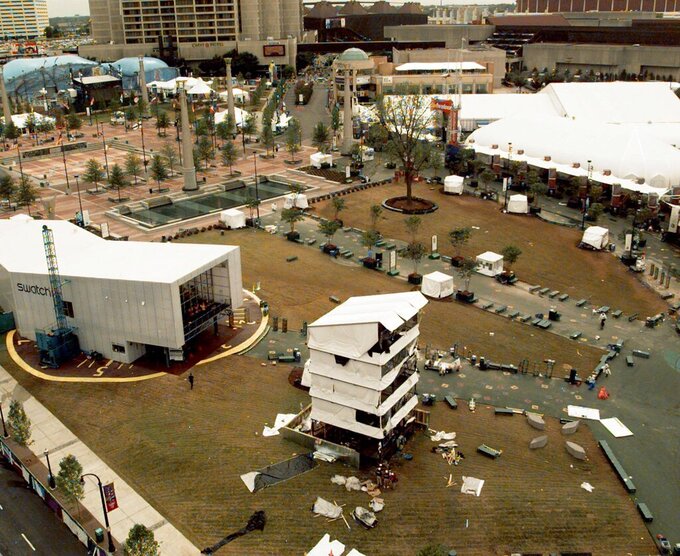 FILE - This Sunday, July 28, 1996, file photo shows Centennial Park at the 1996 Olympic Games in Atlanta, the day after an explosion centered at the bottom of the temporary tower, in the foreground. (AP Photo/John Gaps III, File) 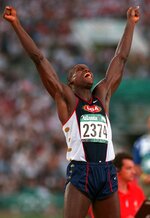 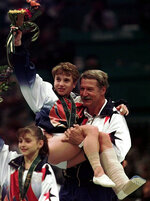 ATLANTA (AP) — EDITORS — With the Tokyo Olympics postponed for a year because of the coronavirus pandemic, The Associated Press is looking back at the history of Summer Games. Here are some of the highlights of the 1996 Atlanta Games, where Muhammad Ali provided the greatest moment before the competition even began.

Less than 24 hours before the opening ceremony of the Atlanta Olympics, at a secretive midnight practice run, Janet Evans finally got the word.

She'd be passing off the flame to The Greatest.

It would become one of the most chilling, eyes-watering moments in Olympic history — Ali, emerging slowly from the darkness into the light of Atlanta's 85,000-seat stadium, his left arm shaking from the ravages of Parkinson's disease but his eyes bright, proudly holding the torch aloft before delivering the spark that officially launched the 1996 Summer Games.

The competition had not even started, but those Olympics already had their signature image.

“There was this moment, as the flame was being passed, I will never forget the look in his eyes,” Evans recalled this week in an interview with The Associated Press. “You could feel it. It was so meaningful to him. You could just see it in his eyes. It didn't take any words.”

Ali won a boxing gold at the 1960 Rome Games and then, as the story goes, he threw his medal in the Ohio River after facing intense racism upon his return home.

Whether that was true or not, the Atlanta Games made it clear Ali always felt a sense of pride in his Olympic accomplishments, which launched a remarkable life that saw him become a three-time heavyweight champion, a renowned humanitarian, a warrior for social justice and, ultimately, one of the world's most popular, recognizable figures.

After Ali's death in 2016, two banners flanked his coffin at his funeral service.

The American flag. And the Olympic flag.

“That evening in Atlanta was clearly meaningful to him in so many ways,” Evans said. “It was also meaningful to the Olympic movement and what the Olympics represents for me. It was — outside of my family, of course — the greatest moment of my life.”

For Evans, that's saying something. She is one of the best distance swimmers in Olympic history, a four-time gold medalist whose competitive career ended unceremoniously with ninth- and sixth-place finishes in Atlanta.

But she learned a far greater lesson at the opening ceremony — not just from Ali, but from all those athletes cheering her on as she lugged the flame around the track and then climbed a ramp to deliver it to The Greatest.

“I finally realized there was more to the Olympics than just collecting gold medals,” she said. “I had this epiphany. It was like, ‘Hey, this is bigger than medals. This is bigger than winning.’ Not many win, but so many are inspired by the games.”

These days, Evans is still a big part of the Olympic movement. When the Summer Games return to the United States for the first time since Atlanta in 2028, she'll be there as the chief athlete officer, trying to ensure that those who compete in Los Angeles have the best possible experience.

If anyone asks, she'll gladly tell them about that night in Atlanta.

“I'm always, always happy to talk about lighting the cauldron,” Evans said, her voice rising with excitement. “That day, that moment in the history of the games, it still speaks to people. It's still very important. And it will always be a big part of my life.”

TRAGEDY IN THE PARK

Midway through the games, tragedy struck when a bomb exploded in Centennial Olympic Park, a 21-acre expanse in the heart of downtown Atlanta which was constructed to serve as a gathering spot for fans and a lasting legacy to the city.

One person was killed by the blast, another died later from a heart attack, and more than 100 people were injured.

Suspicion initially focused on security guard Richard Jewell, who was subject of intense media scrutiny before the FBI cleared him of any wrongdoing several months later.

Investigators eventually captured Eric Rudolph, who pleaded guilty and is serving a term of life without parole at the federal government’s highest-security prison.

The park bombing led to heightened security for the remainder of the Atlanta Games and forced future host cities to also impose far stricter measures, which significantly drove up costs.

Roughly a generation after the passage of Title IX, which significantly increased opportunities for female athletes in the U.S., the progress toward gender equity was on full display in Atlanta.

The American women captured team gold medals in gymnastics, basketball, soccer and softball, helping the host nation lead the medal table for the first time at a non-boycotted games since 1968.

The gymnastics team, known as the Magnificent Seven, wrapped up its victory when Kerri Strug pulled off her final vault on an injured ankle. She had to be carried to the medal podium by coach Béla Károlyi.

The 17-day event was marred by organizational problems and complaints of excessive commercialization.

Bus drivers, many brought in from other cities, struggled to find their way on Atlanta’s jumble of roads and interstate highways.

As the last host city to rely mainly on private funding, Atlanta faced griping that its commercial backers made the event look more like a tacky county fair than the Summer Olympics.

The criticism would soften in the years to come as other countries relied on exorbitant public funding to stage the games., leaving huge bills for taxpayers.

STARS OF THE TRACK

In addition to the opening ceremony, Centennial Olympic Stadium was the site of some of the game’s most iconic sporting moments on the track.

Canada’s Donovan Bailey blazed to a world-record victory in the 100-meter dash. Running in gold shoes, Michael Johnson of the U.S. swept the 200 and 400 — shattering the 200 world record with a time (19.32) that would stand for more than a dozen years. France’s Marie-José Pérec pulled off the same 200-400 double on the women’s side. American Carl Lewis wrapped up his brilliant Olympic career with a fourth straight gold in the long jump.

On the last day of the games, Josia Thugwane became the first black South African to win gold for his country when he crossed the line just 3 seconds ahead of South Korea’s Lee Bong-Ju — the closest finish in Olympic marathon history.

The Olympic program took on a hipper vibe with the introduction of beach volleyball and mountain biking.

“My sport was relatively unknown and a lot of people would not have guessed that women were doing it,” remembered Susan Mattei, an American who took bronze in the inaugural women's mountain bike race. “I definitely felt like the luckiest kid on the block.”

Softball and women’s soccer also made their Olympics, though neither was actually played in the host city. Softball was held in Columbus, about 110 miles southwest of Atlanta, while the soccer team played in several U.S. cities before finishing up at Sanford Stadium in Athens, some 75 miles to the east and best known as the football home of the Georgia Bulldogs.

Payne also wanted to add golf to the program, proposing that it be played at the Augusta National Golf Club. But the home of the Masters came under fire for its exclusionary membership policies and the idea was dropped; it wasn't until 2016 that golf returned to the Summer Games.