A 'huge resounding' success: Shiffrin medals in all 4 events 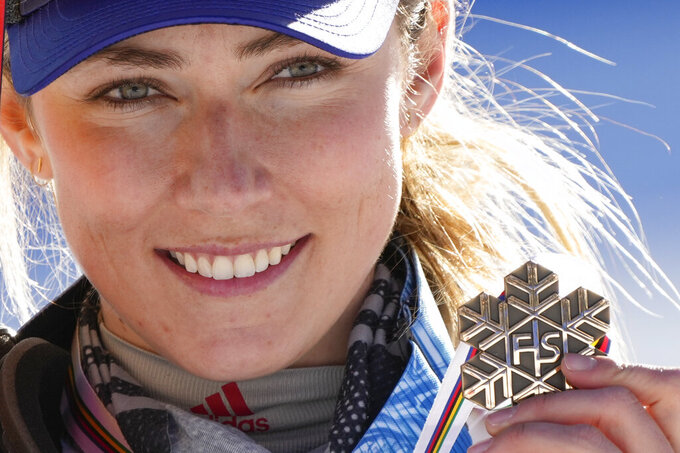 CORTINA D'AMPEZZO, Italy (AP) — An ear-to-ear smile. No regrets. And another medal wrapped around her neck.

What a refreshing sight it was to see Mikaela Shiffrin basking in the afternoon sunlight after another successful day in the Italian Dolomites.

Make that a successful world championships.

After collecting her fourth medal in as many races Saturday by taking bronze in the concluding slalom, the American skier was asked if she was content with how everything went over these two weeks.

“Yes. That’s a huge, resounding yes,” Shiffrin replied. “I mean that’s incredible. I had planned for four races and I thought, ‘OK, that’s four chances for a medal. Hopefully somewhere in these two weeks I can do some good skiing.’ And I’m really proud of so much of the skiing I did.”

It wasn’t just the skiing, though.

Seemingly weighed down by her own expectations and outside pressure at past worlds and Olympics, Shiffrin never seemed the least bit disturbed in Cortina.

“Every day had something really special, and it’s something to smile about,” she said.

One good moment was this: Having just seen her record streak of four straight slalom world titles ended by Austrian upstart Katharina Liensberger in emphatic fashion, Shiffrin was the first racer to run over and congratulate the new champion.

“If this was last year, I would be maybe disappointed but not as grateful for the good moments in the day,” Shiffrin said, referring to her nearly two-second deficit behind Liensberger.

This season, though, is a different one for Shiffrin. She took a 10-month break from racing last year after the death of her father, Jeff Shiffrin, then had her comeback slowed by the coronavirus pandemic and a back injury.

No wonder she wasn’t about to commit to taking the same, more relaxed approach to next year’s Beijing Olympics.

“I would like to,” she said. “It just totally depends on how next season is going leading up to that. Because I can feel amazing now, with a good mentality and then that totally changes. I feel like this past year lasted like 20 years. So I don’t know what’s in store for the next year. But I imagine it’s going to be eventful.”

Having never before entered so many races at a worlds or Olympics, Shiffrin leaves Cortina with gold in combined, silver in giant slalom and bronze in super-G and slalom.

Perhaps even more remarkable is that Shiffrin has now medaled in 10 straight races at worlds — and in 11 of her 13 career starts at her next biggest event after the Olympics.

“I do have a safe now,” she said. “So I’ll probably put (the medals) in there. Or maybe hang them up.

“I like to put the globes (the crystal globes for World Cup titles) around the house, because they’re super pretty. But people ask to see the medals and I’m like, ‘Oh yeah, sure, I’ll go get them.’ But otherwise it just seems like a whole lot of value for me to possibly lose. So just put them somewhere where you just don’t touch it.”

While Shiffrin showed impressive speed last week in her first super-G race in more than a year, she won’t be competing when the World Cup resumes next weekend in nearby Val di Fassa with two downhills and a super-G.

“No, I’ve got to go shave two seconds off my slalom,” she said with a smile.