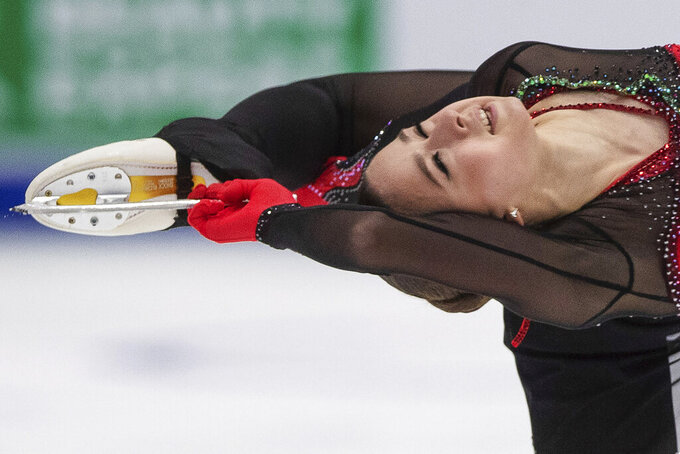 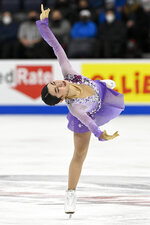 One of the most difficult things to do in sports is originate, to create a new jump, trick or stunt nobody has ever seen.

It’s a brutal balancing act faced by elite athletes, particularly those in Olympic sports, where medals are awarded on the whims of judges. It involves a certain amount of creativity, a whole lot athletic ability and enough guts to risk years of practice and dedication to show the world something that just might leave everyone breathless.

Like, for example, the quad axel that Yuzuru Hanyu hopes to land at the Beijing Games.

The two-time Olympic champion has been toying for years with the only quadruple jump in figure skating that has never been landed in competition. Hanyu tried it most recently at the Japanese championships in December, nearly pulling off the 4 1/2-rotation jump, and has indicated that he hopes to try again during the Olympic free skate.

“It was a really good attempt, and I think he put a lot of effort into that attempt, which is good,” said Ilia Malinin, one of the high-flying, up-and-coming American skaters who is targeting the 2026 Olympics.

“I didn't think anyone would have the guts to pull it out in competition yet. I give him a lot of credit for trying it,” Malinin said. “Maybe I'll try it. Not right now, but definitely think about it in the future.”

That's because in the natural cycle of sports, once someone lands something new, the rest of the world is sure to follow.

Take the salchow, a jump that involves taking off from the back inside edge of one foot and landing on the back outside edge of the other. It was named for its inventor, 1908 Olympic champion Ulrich Salchow, the year after his triumph in London, and now is one of the standard jumps in figure skating along with the lutz, flip, axel, loop and toe loop.

Over the years, athletes began pushing the boundaries of the salchow, landing doubles and triples. By the 2018 Pyeongchang Games, the men were doing quad salchows, and a few women will attempt the quad in Beijing.

Two-time Olympic champion Dick Button pushed the boundaries of figure skating in the 1940s and '50s, trying to raise the level of athleticism in the sport. He landed the first double axel in 1948, the year he won Olympic gold in St. Moritz, and the first triple jump — a loop — the year he won his second at the 1952 Oslo Games.

Sometimes, athletes will push the boundaries so far that even following in their footsteps is difficult.

Japan's Midori Ito, arguably the greatest skater never to win Olympic gold, became the first woman to land a triple axel in competition at a small event in 1988. But the 3 1/2-rotation jump is still out of reach for many women, and even some men, making it one of the highest-scoring elements in figure skating.

“It's been my dream to land a triple axel. That's still in the back of my mind,” said American Karen Chen, who is headed to her second Olympics. “But as competition has arrived, I've had to tone it down to what's important, because it did not seem doable to come here and just throw it out there. That's definitely a goal I still have and want to accomplish.”

The innovation game is rather unique when it comes to Olympic sports, including snowboarding and skiing events, because it's the one time every four years that average fans pay attention. (Maybe you remember the Double McTwist 1260 from Shaun White in 2020?) If new tricks or jumps are unveiled any other time, niche publications and message boards might light up, but a mainstream audience isn't likely to notice.

In the men's halfpipe in Beijing, everyone that tunes in will become familiar with the words “triple cork.” Only a few people can pull off the trick, which features three head-over-heels rotations, but it could be key to winning a medal; most riders, including two-time silver medalist Ayumu Hirano of Japan, are weaving it into their runs.

“It's not a move you can do that many times in practice," Hirano said, pointing out the added challenge of linking it to other jumps, "and in a way, it's hard to pull off unless in competition your heart is in it.”

Australian star Scotty James is working on his version of the triple cork, too.

“One of the hardest points is being able to combo out of it. And the reason for that is when you’re doing the triple cork you land — because it’s such a new trick — you’re still almost like, ‘Yes, I landed!’ But then you forget about what you have to do next wall,” he said. “We are still in that overwhelming part where we land and go, ‘Oh, I’ve got to do something else.’”

That's also one of the challenges faced by figure skaters trying to push their sport higher and faster: Their program doesn't stop if they land a difficult jump. There are usually several more elements that could doom their routine.

In the case of Hanyu, though, the priority is to finally land the quad axel during the Beijing Games.

The rest will take care of itself.

“It's going to be very exciting to see,” said three-time world champion Nathan Chen, the American skater most likely to rival Hanyu for the gold medal. “The talent here is incredible, so the Olympics are going to be incredible to watch. It's going to be awesome. Yuzuru is always pushing the sport forward in his own way. The quad axel is the next step for him.”