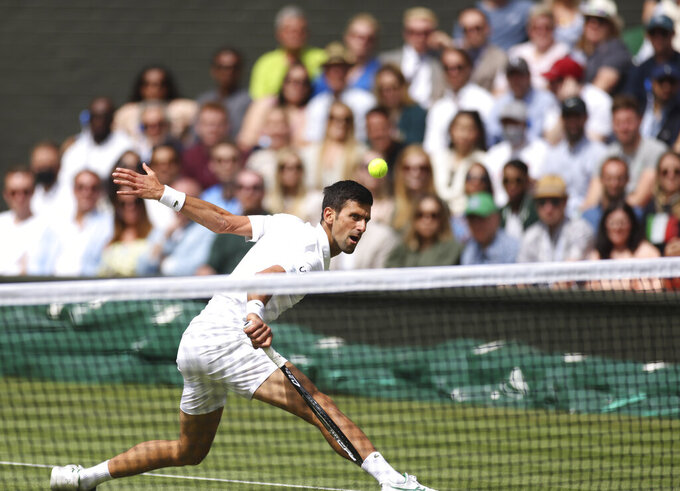 WIMBLEDON, England (AP) — The Latest on Wimbledon (all times local):

Novak Djokovic says he’s still undecided on whether he will play at the Tokyo Olympics.

Djokovic won his sixth Wimbledon title on Sunday and said after the final that he was still “kind of 50-50” on whether to play in Tokyo. The top-ranked Serb said the lack of fans and the tight coronavirus restrictions in place in Tokyo makes him “a little bit divided” on whether to go.

Djokovic has won the first three Grand Slam tournaments of the year and has a chance for a so-called Golden Slam if he also wins the Olympics and the U.S. Open.

She converted both break points she earned in the third set and saved the three she faced.

She finished the match with fewer winners than her opponent — 17 to 23 — but also had 17 fewer unforced errors.

The Duke of Kent was given a small replica of the men’s Wimbledon trophy before handing out the real one for the last time.

The duke is stepping down as president of the All England Club after more than 50 years in the role. He was handed a miniature version of the gold trophy after Sunday’s final between Novak Djokovic and Matteo Berrettini.

He placed the small trophy on the table next to the real one before presenting it to Djokovic, who won in four sets for his sixth Wimbledon title.

The 85-year-old duke is a first cousin of Queen Elizabeth II and regularly sits in the Royal Box on Centre Court during matches. He first handed out the trophy in 1969 to Rod Laver.

Roger Federer has congratulated Novak Djokovic on joining the 20 Club.

Djokovic beat Matteo Berrettini in the Wimbledon final on Sunday to win his 20th Grand Slam title, equaling the record held by Federer and Rafael Nadal.

Minutes after the match ended, Federer sent a congratulatory tweet saying: “Congrats Novak on your 20th major. I’m proud to have the opportunity to play in a special era of tennis champions. Wonderful performance, well done!”

Djokovic also paid tribute to Federer and Nadal in his victory speech, saying “they are the two most important players" he has played in his career.

It was Djokovic’s sixth Wimbledon title and 20th at a major tournament, putting him tied for first on the all-time list with Roger Federer and Rafael Nadal.

The top-ranked Serb broke for a 4-3 lead in the fourth set when Berrettini double-faulted and earned another break in the final game.

Djokovic had led 5-2 in the first set. Berrettini was playing in his first Grand Slam final.

Novak Djokovic is one set away from his 20th Grand Slam title.

The top-ranked Serb broke Berrettini for a 2-1 lead in the third set and then saved two break points at 3-2. He converted his second set point when Berrettini sent a forehand wide.

Novak Djokovic has leveled the Wimbledon final against Matteo Berrettini at one set apiece.

The top-ranked Serb raced into a 4-0 lead but failed to serve out the set at 5-2. He then missed three set points at 5-3 but held at love in the next game.

Matteo Berrettini has won the first set of the Wimbledon final against Novak Djokovic after saving a set point when trailing 5-2.

The Italian leads 7-6 (4), using an ace to convert his first set point.

Berrettini held for 5-3 after a marathon game and broke Djokovic in the next game.

Samir Banerjee has defeated Victor Lilov in an all-American junior final at Wimbledon.

He is the first American junior champion at Wimbledon since Reilly Opelka in 2015, and 12th overall.

Both were unseeded at the tournament. Banerjee is from New Jersey and Lilov comes from North Carolina.

The men’s Wimbledon final between Novak Djokovic and Matteo Berrettini is underway.

The match began with the retractable roof open on Centre Court, under cloudy skies and temperatures around 70 F (21 C).

Novak Djokovic has a chance to win a record-equaling 20th Grand Slam title when he plays Matteo Berrettini in the Wimbledon final.

The top-ranked Djokovic is playing in his 30th Grand Slam final and is one title shy of the record shared by his great rivals Roger Federer and Rafael Nadal.

The No. 7-seeded Berrettini is playing in his first Grand Slam final and is trying to become the first Italian to win Wimbledon.

Djokovic is looking for his third straight Wimbledon title and sixth overall.

It is the first time the men's final will have a female chair umpire, with Marija Cicak of Croatia to officiate the match.