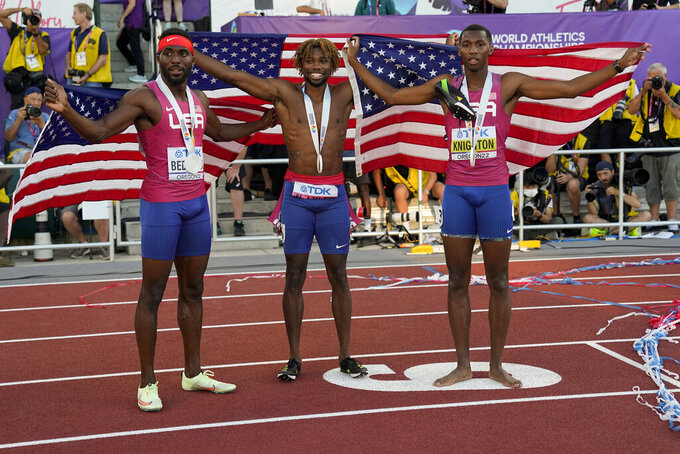 EUGENE, Ore. (AP) — Noah Lyles crouched down, put his hands on his knees and glared at the clock. Not seeing what he’d hoped for, he waved his hand dismissively and walked back onto the track to celebrate what was still a long-awaited win in the 200 meters at the world championships.

Oh, but this night would just keep getting better.

The clock that, for a moment, read “19.32,” would adjust down a tick to “19.31.” That meant he broke Michael Johnson’s hallowed, 26-year-old American record — a mark that, for decades, seemed unapproachable.

“I was very self-concerned about whether that number was going to turn from a ‘2’ to a ‘1,” Lyles conceded after Thursday night’s history-making win.

Then, a few seconds later, the scoreboard that, at first, only had Lyles' name on it, popped up with the names of the two finishers behind him: Kenny Bednarek and Erriyon Knighton of the U.S. The U.S. had swept the 200, just as it had the 100 four nights earlier.

Lyles pounded his hand on the track four times, stood up straight and ripped off his jersey. He grabbed his medal from the presenter, then went over and hugged his family and took hold of an American flag — one of many that have been needed at the first world championships to be held in the United States.

The sweep gave the U.S. 22 medals through seven days.

“America’s, like, scooping up medals left and right," Lyles said. “This feels great because I've been waiting for America to come out and dominate since I got on the platform.”

Lyles' 19.31 was the third-fastest time in history, behind only Usain Bolt’s 19.19 in 2009 and a 19.26 run two years later by another Jamaican, Yohan Blake, while he was briefly pushing Bolt for supremacy.

But Johnson and those gold shoes that crossed the line in 19.32 at the Atlanta Olympics in 1996 hold a titanic place in track history, too. Johnson ran it 352 days before Lyles was born. The number “19.32,” stood there, teasing and taunting, for decades — an especially awe-inspiring mark for any fast kid with big dreams in the early 2000s.

Hours after the victory, Johnson was down on the track talking with Lyles while a few dozen fans soaked in the scene. Lyles said they had never met before. Johnson lifted Lyles' arm in the air while the fans took pictures of the former and new American record-holders.

“He just said he had a great race,” Johnson told an Associated Press reporter when asked what they talked about. “He said he worked harder than he ever did. I thought he ran a great curve. And so, it was fantastic.”

Lyles' victory came moments after Shericka Jackson gave the Jamaican women another gold in the sprints. She ran 21.45, the second-fastest time in history, to beat her teammate, 100-meter champion Shelly-Ann Fraser-Pryce, by 0.16.

Jackson's time is shy only of the 21.34 run by Florence Griffith-Joyner at the 1988 Seoul Olympics. Jackson said her victory was fueled by a mistake at last year's Olympics where she slowed down in the curve and finished fourth in her preliminary heat. She called it a silly mistake — one she hadn't re-watched a single time.

While the Jamaican medalists were the same as four nights ago — Olympic champion Elaine Thompson-Herah, who won bronze in the 100, finished seventh in this one — the Americans put a completely different trio on the stand.

Fred Kerley, Marvin Bracy and Trayvon Bromell dominated the 100. This time, it was Lyles, Bednarek — the Olympic silver medalist who broke his toe in December at home while installing a cabinet — and Knighton, who is now the youngest individual sprint medalist in worlds track history.

Knighton's 19.49 earlier this year made him a slight favorite in this race and set up what has been touted as a rivalry with Lyles. It was the 25-year-old Lyles who beat Knighton last month at nationals and waved his finger as he crossed — a not-so-subtle message that he wasn't giving in to his younger rival.

“Everybody put in the work to be great, and that's what he did,” Knighton said. “I mean, he broke the American record.”

But Lyles would be the first to concede that his biggest competition over the past few years has been himself. Once, he was seen as track's solution to its Bolt problem — namely, who to turn to capture eyeballs after the sport's most outsized personality retired.

But the pandemic hit.

Lyles, who considers himself an entertainer at heart, suffered at traveling alone and competing in front of empty seats. He was unflinching about his mental-health struggles and how difficult it was to not be able to race alongside his brother, Josephus, who is on the U.S. relay pool this week.

“The mental health I had in that moment is what makes this moment also great,” Lyles said. “Because it shows that you can come through a dark storm and come out of it better.”

This week, the crowds were back, and the trip to Oregon was easy. Lyles said he felt more “me” than he had in a while.

Though the time says it best, the race he ran was, indeed, a beauty.

Arms pumping, machine-like, his 5-foot-11 frame — two inches shorter than Johnson and a half foot shorter than Bolt — hugged the inside line of Lane 6 as he rounded the curve. It was over after that. When Lyles hit the straightaway, two body lengths separated him and Bednarek in Lane 5. When Lyles hit the finish line, the gap between him and second place was three full strides.

“That’s definitely the start of my life,” Lyles said of his first 100 meters.

“And it’s only gonna get faster," he said.