NBC will not send announcers to Beijing for Winter Games 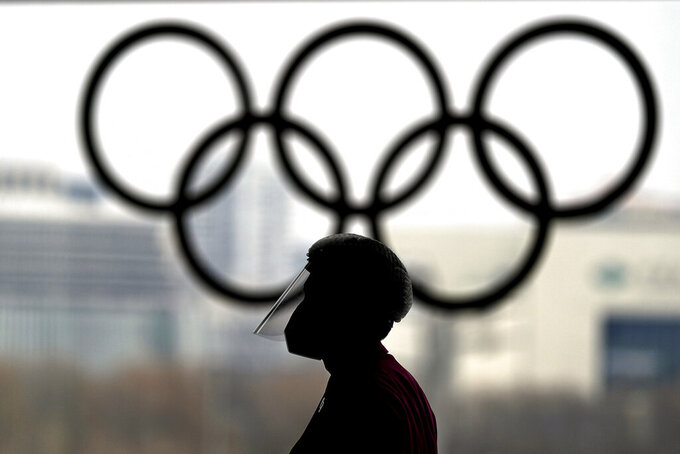 A person wearing a face shield walks past the Olympic rings inside the main media center at the 2022 Winter Olympics, Wednesday, Jan. 19, 2022, in Beijing. (AP Photo/David J. Phillip)

NBC will not be sending its announcers and most hosts to the Beijing Olympics due to continued concerns about rising COVID-19 cases worldwide and China's strict policy about those who test positive.

It will be the second straight Games for which the broadcast teams will work mostly out of NBC Sports headquarters in Stamford, Connecticut, rather than the host city.

“Something significant has changed virtually every day for the last three months, forcing us to adjust our plan numerous times. And I expect that to continue as well as the challenge of doing the Olympics,” said Molly Solomon, the head of NBC's Olympics production unit.

“With COVID’s changing conditions and China’s zero-tolerance policy, it’s just added a layer of complexity to all of this, so we need to make sure we can provide the same quality experience to the American viewers. That’s why we are split between the two cities.”

NBC Sports spokesman Greg Hughes said in a phone interview the network no longer plans to send announcing teams for Alpine skiing, figure skating and snowboarding to China. Those had been among the handful of announcers expected to travel, but NBC's plans changed over the past couple of weeks.

“Our plans will continue to evolve based on the conditions, and we’re going to stay flexible as we move through this,” Hughes said.

NBC Olympics president Gary Zenkel is one of 250 people the network already has in Beijing. Most of those are technical staff.

“We are in a closed loop. It is restrictive access, but it does allow us to access the broadcast center and venues,” he said.

Olympic athletes, media and workers will be cut off from the rest of China during the Games, with the only places they can go being competition venues, their accommodations and transportation between the two. China plans to isolate anyone who tests positive for COVID-19 for at least two days, pending a negative result. The country also has a mandatory 21-day isolation period for anyone entering the country who isn't vaccinated.

USA Today was first to report on NBC's decision.

Most of NBC’s announcers were stateside for the Summer Games, but the marquee sports of track and field, swimming and gymnastics had announcers in Tokyo.

NBC is expected to be transparent about the fact that its announcers are not onsite.

Prime-time host Mike Tirico will anchor coverage from Beijing from Feb. 3-10 before flying to Los Angeles to host the next three days and the network’s coverage of the Super Bowl. NBC said it would determine over Super Bowl weekend where Tirico would be based for the final week of the Games.

Some reporters from NBC's sports and news divisions will be based in Beijing during the Games. With Beijing 13 hours ahead of Connecticut, most announcers will be up at night calling the action.

NBC has called action remotely for some sports during past Olympics, including basketball and hockey. Remote coverage became common on all networks during the COVID-19 pandemic, especially in 2020 and early last year when fans were not allowed in many arenas and stadiums.