Olympic Alpine team event moved to Sunday because of wind 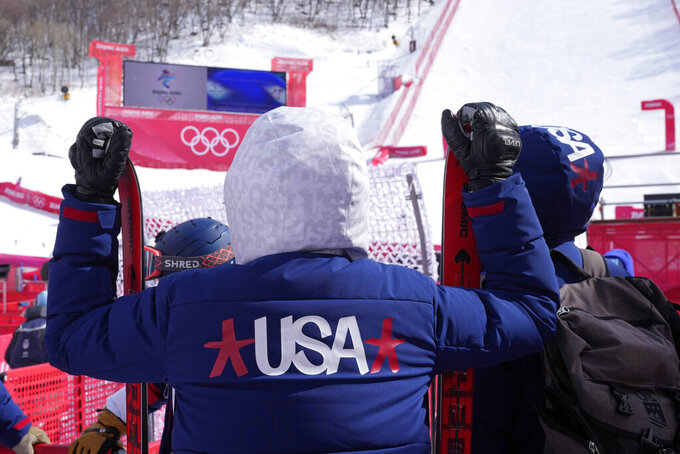 Members of the United States team stand in the finish area after the postponement of the mixed team parallel skiing event at the 2022 Winter Olympics, Saturday, Feb. 19, 2022, in the Yanqing district of Beijing. (AP Photo/Luca Bruno)

BEIJING (AP) — The last Alpine skiing race of the Beijing Olympics was moved from Saturday to Sunday because of too-strong wind, making Mikaela Shiffrin wait to get one last chance to bring home a medal from China.

Gusts at up to about 40 mph (65 kph) led to the announcement of two one-hour delays for the mixed team parallel event, before the International Ski Federation eventually said it would not be possible to hold the competition at all on Saturday.

About 75 minutes later, after what the ski federation called a meeting “to discuss the potential rescheduling of the event,” the race was shifted to Sunday at 9 a.m.

Snow was being blown around Saturday and the blue and red gate flags were whipping along the race course known as Ice River at the National Alpine Skiing Center in Yanqing zone, about 55 miles (about 90 kilometers) northwest of central Beijing.

Gondola service up to the race site was temporarily paused.

This was only the second time the team event has been part of the Alpine program at a Winter Games after making its debut at the 2018 Pyeongchang Olympics.

Athletes go head-to-head on parallel giant slalom courses during a series of heats, and each nation is represented by both women and men.

Only one of the 10 athletes who earned an individual Alpine gold in Beijing was listed on the team rosters released Friday: Austria’s Johannes Strolz. He won the men’s combined last week and also picked up a silver in slalom on Wednesday.

The team event would be Shiffrin’s sixth race of the Beijing Games. The two-time gold medalist at previous Olympics was named to the U.S. team event roster that was slated to face Slovakia in the opening round.

Shiffrin's haul from past Olympics includes two golds, but her best showing in five individual events in Beijing was ninth place in the super-G.

Otherwise, she was 18th in the downhill and ended up with “Did Not Finish” results next to her name for three races: giant slalom, slalom and Alpine combined.

The United States collected only one of the 30 individual medals in Alpine — Ryan Cochran-Siegle's silver in super-G — the country's lowest total since also getting just one at the 1998 Nagano Olympics.

Switzerland led the Beijing standings after the individual events with nine medals, including a record five golds.

Other first-round matchups in the team event: Switzerland vs. China; Italy vs. Russia; Norway vs. Poland; France vs. Czech Republic; Germany vs. Sweden; and Slovenia vs. Canada.

There were 15 countries entered in a 16-team bracket, so top-ranked Austria received a first-round bye.

Four years ago, Switzerland won gold in the team event, with Austria earning the silver and Norway the bronze.