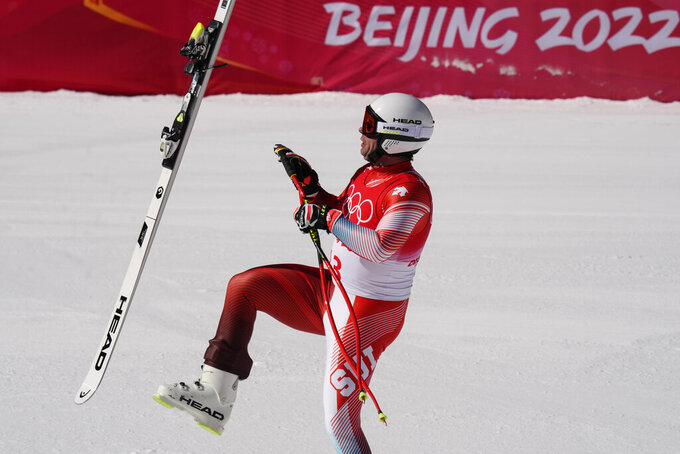 Beat Feuz, of Switzerland, celebrates in the finish area during the men's downhill at the 2022 Winter Olympics, Monday, Feb. 7, 2022, in the Yanqing district of Beijing. (AP Photo/Luca Bruno)

In the matter of only a few weeks, his second daughter was born; he won the most prestigious World Cup race of the season in Kitzbühel, Austria; and on Monday he claimed the Olympic downhill title to finally complete his overflowing collection of achievements in skiing's fastest discipline.

“I can’t think of anything more beautiful than flying home with a gold medal around my neck,” said Feuz, who later teared up as he spoke to his family by video.

To celebrate his run down the mountain, Feuz kicked off his ski and flipped it up into the air before catching it in one swift motion — a tribute to former Swiss downhiller Didier Cuche, who used to celebrate that way.

On a course designed by Bernhard Russi, another Swiss great who won the downhill a half-century ago at the 1972 Sapporo Games, Feuz finished a slim 0.10 seconds ahead of 41-year-old Johan Clarey of France.

Clarey became the oldest man to win an Olympic medal in Alpine skiing. The previous oldest was Bode Miller, who was 36 when he took the bronze in super-G in 2014.

“When you are a medalist (whether) you are 20 or 41 it doesn’t matter,” Clarey said. “It’s just an Olympic medal. It’s already a good memory.”

The 5-foot-8 (1.72-meter) Feuz, who turns 35 on Friday, won a silver medal in super-G and bronze in downhill at the 2018 Olympics and is the four-time reigning World Cup downhill champion. He also won the downhill world title in 2017 and holds the career record of 45 World Cup podium finishes in the sport’s fastest discipline.

Now he is the first Swiss man in Alpine skiing to win an Olympic medal in every color.

“It was perfect weather, no wind, and I was just standing perfectly on the skis,” Feuz said. “The Olympics are a big thing. ... Today everything came together."

Two-time Olympic champion Matthias Mayer of Austria was 0.16 behind and added a bronze medal to his career haul.

Feuz will be a contender for another medal in Tuesday’s super-G. Then he’ll fly back to Switzerland.

“In 40 hours I’m looking forward to being at home and having my family back in my arms,” he said.

Aleksander Aamodt Kilde of Norway, a popular pick to win because he leads the World Cup downhill standings and was fastest in Friday’s training session, finished fifth, a half-second behind Fuez.

“I had high expectations for myself today, but it didn’t go 100% as planned,” Kilde said.

The race was originally scheduled for Sunday but was postponed a day because of strong winds on The Rock Course.

The wind was less of an issue on Monday.

The 24-year-old Crawford pumped his fist as he crossed the line second-fastest after 12 skiers. And then faced an anxious wait.

“When I crossed the finish line I was super excited, I knew it would be a decent day,” Crawford said. "But I also knew there were a lot of guys who were big threats and it only took two but that's an Olympic medal.

“Hopefully I can bring it out tomorrow and ski the way I'm doing in the super-G.”

Dominik Schwaiger of Germany, the second starter, was taken away in a sled after falling midway down. He landed on his back then slid down the mountain and grazed the safety nets. He was holding his left arm in apparent pain once he stopped.

Daniel Hemetsberger, another Swiss skier, had his face bloodied — apparently from when he hit a gate. Also, Broderick Thompson of Canada crashed on a flatter part of the course but quickly got up and appeared to be OK.