Remote Games: NBC announcers ready to call action from US 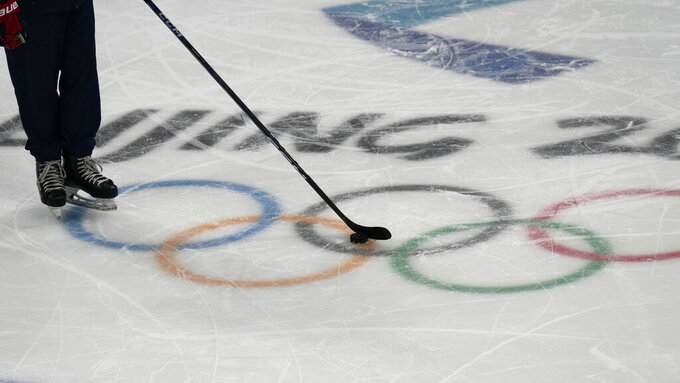 A puck slides over the Olympic rings during a hockey practice at the 2022 Winter Olympics, Wednesday, Feb. 2, 2022, in Beijing. (AP Photo/Petr David Josek)

Dan Hicks had a short drive from his home to NBC Sports headquarters in Stamford, Connecticut, the past two years to call the French Open and some World Cup skiing events. He didn't imagine he would be doing it for an Olympics, though.

With China's strict policy about those who test positive for COVID-19, Hicks and most of NBC's announcers for the Beijing Games are stationed stateside. Hicks was in Tokyo to call swimming for last year's Summer Games, when NBC had its announcers on site for the marquee sports.

While Hicks would like to be at the ski venue in Yanqing to call the competition, he realizes it isn't feasible.

“I was bummed. No doubt about it but I know this was the right call by our NBC folks,” Hicks said. “I kind of expected this was going to be the case when I was notified. The protocols are the strictest I think we've ever seen.”

The only major network sending a large contingent to Beijing is Australia's Seven Network since Olympics held in Asia are the equivalent of when NBC gets to do the Games in North America.

The revised plan had NBC sending announcing crews for Alpine skiing, figure skating and snowboarding. Hicks said he was originally supposed to depart for China on Jan. 24 until NBC made its final decision.

“It’s just too much of a gamble to bring the announcers there. Let’s say we test negative here and test positive there, you’ve got no recourse and are subjected to the protocols,” Hicks said. “You’re in somebody else’s country, you’re under the jurisdiction of their rules and how they operate. We just couldn’t take a chance.”

The most NBC, CBC and BBC have on the ground in Beijing is technical staff. Some reporters from NBC’s sports and news divisions will be based in Beijing during the Games.

NBC's biggest name at the Olympics is prime-time host Mike Tirico. He will anchor coverage from Beijing on Thursday through Feb. 10 before flying to Los Angeles to host the next three days and the network’s coverage of the Super Bowl. NBC said it would determine over Super Bowl weekend where Tirico would be based for the final week of the Games.

Past Olympics have been done remotely. It just hasn't been done at this scale. NBC had some basketball and hockey games as well as some other sports done from either New York or Stamford in the past.

Remote coverage became common on all networks during the pandemic, especially in 2020 and early last year when fans were not allowed in many arenas and stadiums.

Tara Lipinski is no stranger to calling events from Stamford. Lipinski, Johnny Weir and Terry Gannon are used to calling Grand Prix or World Championships from there. With figure skating being the premiere event of the Games, though, they will be receiving one of the bigger studios instead of having to work from a tiny booth.

“An Olympics is an Olympics wherever you are. So you show me those rings, and I’ll bring the tears,” Lipinski said. “Even if we were just calling it from a small TV in our hotel rooms, we’d have the same energy and excitement.”

All the announcers at Stamford will have the same video feeds and statistical monitors that they would have if they were at the venues. Lipinski said the setup shouldn't be much different from the one they are used to.

“Even though we were at an arena, we have about 16 screens in front of us that we’re looking at. So we’re not always looking at the ice,” she said. “We’re looking at scoreboards, different monitors that are showing the skaters up close or just the regular feed right in front of us. I think once we’re sitting in that studio, it’s not going to feel that much different.”

The biggest challenge might be the time difference. With Beijing 13 hours ahead of Connecticut, most announcers will be up throughout the night.

Hicks — who called 95% of a race off a monitor when he was at a ski event — noted the drawbacks to not being there are that analysts Ted Ligety and Steve Porino are not able to ski the course before competition and get perspective from some athletes and coaches. They will still be able to text with coaches before an event to get a read on conditions.

Hicks and Lipinski said that no matter where they are during the Olympics, their jobs remains the same.

“It’s on me and the rest of our talent to tell the stories," Hicks said. "And we can tell those stories from a booth in Stamford, Connecticut, just as well as we can tell them from a booth overlooking the finish line in Beijing.”