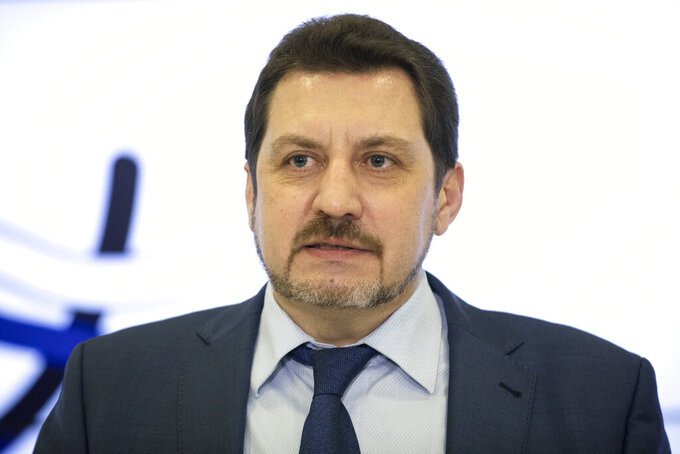 FILE - In this Friday, Feb. 28, 2020 file photo, Yevgeny Yurchenko speaks during a news conference after being elected as the new President of the Russian Athletics Federation in Moscow, Russia. The program allowing Russian track athletes to compete internationally will be frozen because the country's federation failed to pay a fine on time, World Athletics said Thursday, July 2. The Russian track federation (RusAF) owes a $5 million fine and another $1.31 million in costs for various doping-related work and legal wrangles. RusAF president Yevgeny Yurchenko earlier told the Tass state news agency that his federation's finances were damaged by the coronavirus pandemic and that it had asked for more time to pay. (AP Photo/Pavel Golovkin, file)

MOSCOW (AP) — The president of the Russian Athletics Federation resigned on Monday after less than five months in the job amid a stalemate with World Athletics regarding the country's longstanding doping suspension and an unpaid $5 million fine.

In a brief statement on the federation website, Yevgeny Yurchenko didn’t give a reason for stepping down.

He said he wished his successor could “move forward to resolve the nearly five-year-long difficulties in relations with World Athletics and also make it possible to attract enough funding to develop the federation.”

The federation, known as RusAF, missed a July 1 deadline to pay the $5 million fine and $1.3 million in costs. Yurchenko said at the time it couldn't afford to pay.

When Russia missed the deadline to pay, World Athletics froze procedures allowing top Russian athletes to compete internationally as “authorized neutral athletes” during Russia's suspension, ahead of a July 29-30 council meeting. That could prevent some top Russians competing when the Diamond League restarts next month.

“We are aware of this news," World Athletics said in a statement, "but this is obviously an internal matter and we will wait to hear from RusAF.”

The fine was imposed after Yurchenko admitted wrongdoing on behalf of RusAF under its previous leadership. The federation had been accused of providing forged documents to give an athlete an alibi for being unavailable for doping testing. RusAF has been suspended since 2015 for widespread doping.

Before Yurchenko was elected unopposed on Feb. 28, he was best known as a businessman with a seat on the board of a majority state-owned aircraft manufacturer. He also briefly served as a regional deputy governor.

Also on Monday, the president of the Russian Olympic Committee said in comments reported by state news agencies that an audit of the country's anti-doping agency's finances revealed irregularities.

The allegations could not immediately be verified, but ROC president Stanislav Pozdnyakov was quoted as saying the audit would be made public. The agency's supervisory board will consider the findings from the audit, Pozdnyakov said in comments reported by the RIA Novosti agency.

Russian Anti-Doping Agency CEO Yuri Ganus denied any financial misconduct on Friday. He was speaking in response to allegations published anonymously on the social media and messaging platform Telegram.

The Russian agency, known as RUSADA, is challenging the World Anti-Doping Agency over its decision to bar Russia's name and flag from major events including the Olympics. WADA ruled last year that Russia manipulated doping laboratory data to cover up past offenses.