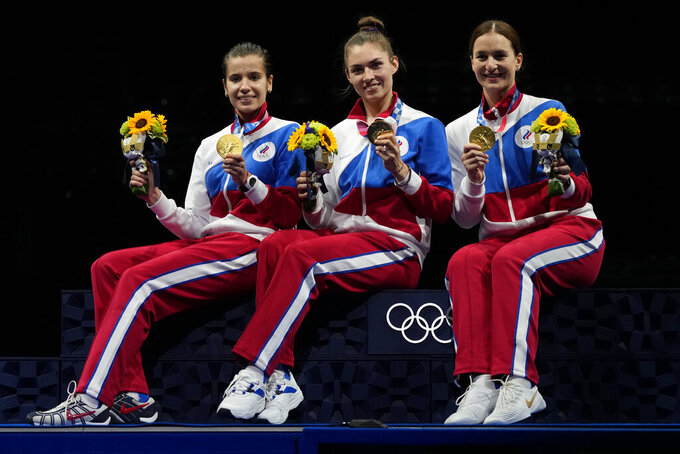 CHIBA, Japan (AP) — The Russian Olympic Committee won the women’s team saber fencing Saturday by beating France 45-41 in the final for its third fencing gold medal of the Tokyo Olympics.

The Russian athletes trailed 20-14 after four of the nine bouts in the final before Olga Nikitina turned it around by winning the fifth bout 11-3 over Charlotte Lembach.

Sofya Velikaya won her fifth career Olympic medal by retaining the title she won with the Russian team in 2016.

Sofia Pozdnyakova, who defeated Velikaya in the individual final, is the second woman to win the individual and team saber events at the same Olympics after fellow Russian Yana Egorian managed the same feat in Rio de Janeiro in 2016. The ROC's third fencing win was in women's team foil.

“Unbelievable dream. For me, when I think about it, I think it’s impossible," Pozdniakova said of winning the individual and team saber. "But it’s always possible if you love your job, if you train hard, if you enjoy what you do."

Pozdniakova's father Stanislav Pozdnyakov won three Olympic team saber gold medals from 1992 through 2000. He is now president of the Russian Olympic Committee, the organization under whose name Russian athletes are competing at the Tokyo Olympics following a legal battle over doping laboratory data.

South Korea beat Italy 45-42 for the bronze. Italy led 25-15 after the fifth bout, but South Korean fencer Yoon Jisu won the next bout 11-5 and Seo Jiyeon followed up with a 9-3 win in the seventh.

It was the first time that France or South Korea were on the podium in women's team saber.