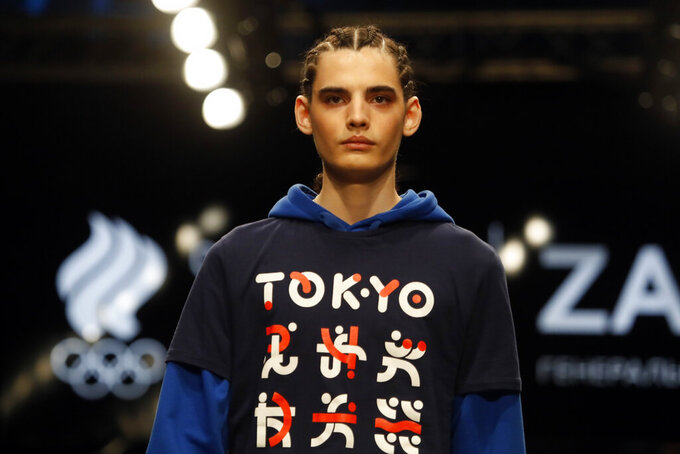 A model displays the Olympic uniforms for Russian athletes in Moscow, Russia, Wednesday, April 14, 2021. Russia presents its Olympic kit for the Tokyo Games, which shouldn't depict any symbols of the country. Russian athletes will compete at the Tokyo Olympics as neutral after the Court of Arbitration for Sport last December banned Russia from using its name, flag and anthem at any world championships for the next two years because of state-backed doping. (AP Photo/Pavel Golovkin)

MOSCOW (AP) — The Russian flag is barred from the Olympics in a doping dispute. You wouldn't know it to look at the Russian uniforms.

The International Olympic Committee told The Associated Press that Russian athletes in Tokyo will be allowed to wear a range of uniforms in national colors unveiled by models in a runway show in Moscow on Wednesday.

That unveiling show included polo shirts and jackets with white shoulders above thick bands of blue and red — the colors of the Russian flag, in the same order.

“You don’t really need to have a strong imagination. In those uniforms that you saw, our national flag can be seen really really obviously," Russian Olympic Committee president Stanislav Pozdnyakov said.

The logo on the uniforms is that of the ROC, not the national coat of arms. That's because of a Court of Arbitration for Sport ruling from December which barred Russia's name, flag, anthem and other national symbols in a package of sanctions over what it deemed Russia's failure to turn over accurate data from the Moscow drug-testing laboratory. The team in Tokyo will be officially known not as “Russia,” but as “ROC”, for Russian Olympic Committee.

“The ROC uniform designs for the Olympic Games Tokyo 2020 are in line with the established and published implementation guidelines,” the IOC told the AP in an e-mailed statement. “The uniforms have been approved on this basis.”

Russian athletes had similar limits on their uniforms and symbols at the 2018 Winter Olympics in Pyeongchang, when the team was known as “Olympic Athlete from Russia.” The rules for those Olympics specified no more than two of the three colors from the Russian flag could be used together on uniforms, a restriction which no longer applies.

For one new Russian Olympian, it all takes some getting used to.

“I remain an athlete from Russia,” climbing athlete Yulia Kaplina said. Her sport makes its Olympic debut in Tokyo. “Of course it’s a shame that we don’t have our national flag or emblem (on the uniforms), but they’re in my heart."